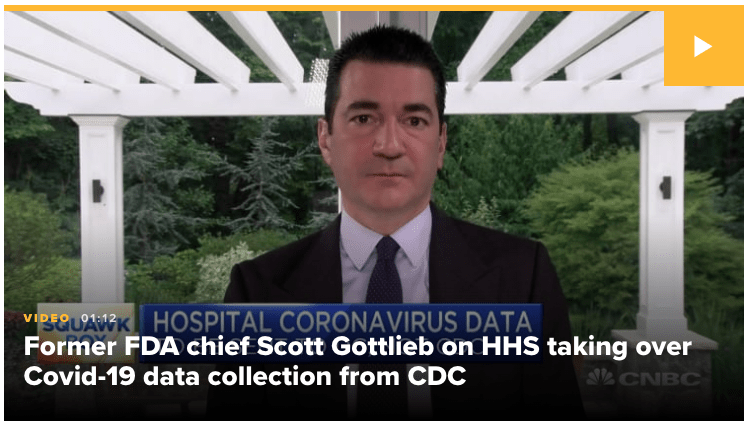 The Trump administration confirmed Wednesday that it has ordered hospitals to send data on coronavirus patients straight to the Department of Health and Human Services, instead of the Centers for Disease Control and Prevention.

The change raised questions about the integrity of the process. Some former health officials worry the move could result in less transparent data, although they acknowledged in interviews that the CDC’s data collection system is outdated and doesn’t meet the demands of the Covid-19 pandemic.

“The CDC’s old data gathering operation once worked well monitoring hospital information across the country, but it’s an inadequate system today,” HHS spokesman Michael Caputo said in a statement to CNBC. “The President’s Coronavirus Task Force has urged improvements for months, but they just cannot keep up with this pandemic.”

The New York Times first reported on the Trump administration’s updated guidance on data reporting for hospitals and laboratories. The new guidance, which was quietly updated on July 10, was posted on the HHS website. The agency, which oversees the CDC, Food and Drug Administration and other U.S. health agencies, will now collect daily Covid-19 reports directly. That includes the number of hospitalized patients, available beds and medical equipment like ventilators as well as information used to organize the U.S. pandemic response. 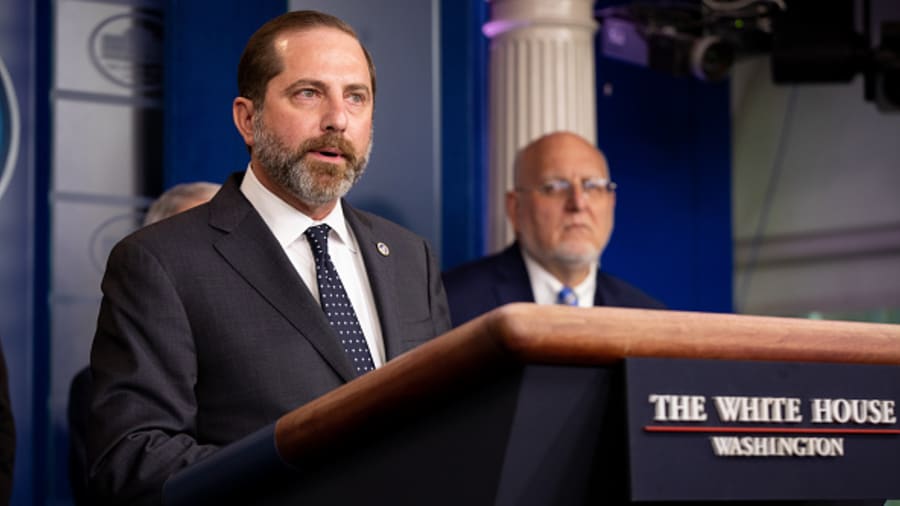 Alex Azar, secretary of Health and Human Services (HHS), speaks during a news conference in the briefing room of the White House in Washington, D.C.  (Amanda Andrade-Rhoades | Bloomberg | Getty Images)

CDC Director Dr. Robert Redfield said Wednesday on a conference call with reporters that states were told to stop sending hospital information to the National Healthcare Safety Network site, the CDC’s system for gathering data, beginning Wednesday. He added that the decision was made in conjunction the CDC.

“In order to meet the needs for flexibility of data gathering, CDC has agreed to remove the National Health Safety Network from the collection process in order to streamline reporting,” he said. “This has no effect on CDCs ability to use data and continue to churn out daily data, the MMWRs and the guidance that we publish.”

Caputo said the change in policy will allow the U.S. to collect more complete data and to do so more quickly. He added that the CDC will still “participate in this streamlined all-of-government response,” but they will no longer control the data reporting element.

Jose Arrieta, chief information officer for HHS, said on Wednesday’s conference call that despite the change in reporting systems, the government will continue to release data occasionally to the public through the CDC. Arrieta said the HHS data was initially for analysis and policy decisions rather than for the general public, but said some of the data is released publicly through the CDC.

He added that HHS is working to make more of its data publicly available.

“We’ve been focused on collecting data so that we could perform analysis and allocate resources in an effective manner,” he said, adding that some data is released through the CDC. “There is a possibility that that we could do it at a larger scale… That’s the ultimate vision.”

Dr. Janis Orlowski, who serves on the working group formed by White House health advisor Dr. Deborah Birx to improve the national data reporting system, said the group was formed because the administration was concerned that some hospitals were misreporting or failing to report critical Covid-19 information to the CDC.

Orlowski, chief health care officer at the Association of American Medical Colleges, said most hospitals were doing their best to report up-to-date information but many were inundated with redundant requests from separate agencies.

“Because [hospitals] were reporting into agencies, and using different portals for the data to be submitted, and besides the portals, they could report to the state, as you can imagine, this became a data issue of how do you coordinate all this,” she said. “So our job became see, can we simplify the reporting process.”

Orlowski said Birx and other administration officials gave their word to the working group, which includes CDC staff, that the change wouldn’t hamper the quality or transparency of the data. However, she said she doesn’t know whether outside researchers, like universities that are tracking the outbreak, will have the same access to the data as before.

“They had verbally told us that transparency would remain,” she said. “And so those of us who are on the working group didn’t see this as the CDC being cut out.”

Former Food and Drug Administration Commissioner Dr. Scott Gottlieb said “the data is still going to be shared with CDC.” He said Wednesday that there has been frustration over the CDC’s data reporting, but that the administration may have been better off fixing those issues within the CDC, rather than trying “to re-create the wheel.”

“I think they would have been better served probably investing in what CDC is doing and the CDC systems because CDC is a better repository for information,” he said on CNBC’s “Squawk Box.” “They have the scientific expertise to cull this data in a way that no other agency does.”

Dr. Bill Winkenwerder, who served as assistant secretary of Defense for health affairs under President George W. Bush from 2001 to 2007, said the decision is a function of an outdated data reporting system that has been under-invested in for year. He said he doesn’t think it’s fair to characterize the decision as necessarily political.

“The key point is the HHS and the White House need this data quickly to coordinate a whole host of decisions that are not made at the CDC level,” Winkenwerder told CNBC. “The one-week lag that was described — that is a long time. Every day counts, so I can understand why they need and want that information.”

HHS needs accurate data quickly so it can make potentially life-saving decisions, such as allocating the nation’s limited supply of remdesivir, the only drug that’s authorized for emergency use in the U.S. to treat Covid-19. He added that it’s crucial for this data to be transparently shared with other agencies and with the public, but he’s glad the reporting system is being overhauled.

“Hopefully once this Covid pandemic is at least more under control or once we get a vaccine, we absolutely need to invest more in updating our data aggregation systems,” Winkenwerder said. “Whatever they can do to fix the data in the interim is great. Long term, it needs to be improved in general.”

President Donald Trump and his administration have come under fire during the pandemic from critics who say the White House is undermining the country’s public health professionals. Last week, Trump criticized the CDC’s guidelines on reopening schools as too tough and expensive and Vice President Mike Pence said the agency would issue additional recommendations.

“As the president said today, we just don’t want the guidance to be too tough,” Pence told reporters last week. “That’s why the CDC will be issuing more guidance going forward, because we know each school system has unique capabilities and different facilities.”

On Tuesday, four former CDC directors wrote in an op-ed published in The Washington Post that the U.S. faces “two opponents” in its efforts to reopen the country: Covid-19 and politicians and others attempting to undermine the CDC.

“Through last week, and into Monday, the administration continued to cast public doubt on the agency’s recommendations and role in informing and guiding the nation’s pandemic response,” they said.