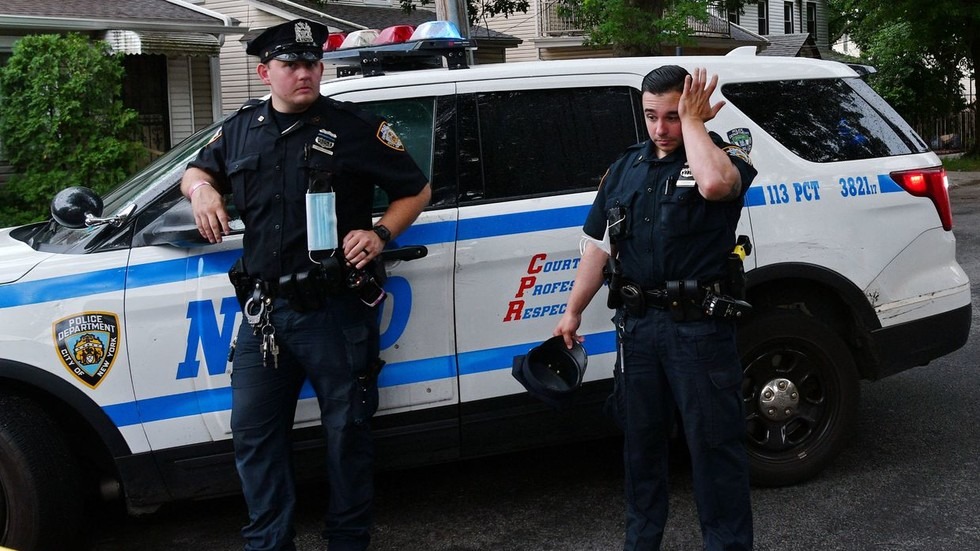 A small group of counter-protesters assaulted three New York Police Department officers, including the most senior uniformed cop with almost 40 years on the force, during a protest in support of the NYPD on the Brooklyn Bridge.

NYPD Chief of Department Terence Monahan was hospitalized with a broken finger and required stitches after a group of demonstrators attacked him and two other officers on the bridge during a ‘Stop the Violence’ protest on Wednesday. Two other cops – a lieutenant and a sergeant, according to local media – were left bleeding from minor head wounds, according to photos released by the NYPD.

These are the injuries our officers sustained. pic.twitter.com/KI9wQKywHH

At least 37 people were arrested during the demonstration, which was backed by NYPD union the Sergeants Benevolent Association. Video of the altercation shows a counter-protester running along the upper level of an on-ramp to the bridge and hitting the cops with a big stick as they struggled with two other protesters through a fence. It’s not clear how the skirmish began.

Pro-cop protesters, including elected officials, police unions, church groups, and community leaders, marched across the bridge only to come face to face with counter-demonstrators from the Occupy City Hall protest, many of whom have been camped out in a park near City Hall (and the on-ramp to the bridge) demanding Mayor Bill de Blasio defund the NYPD to the tune of $1 billion. The city’s budget was submitted weeks ago, yet some occupiers remain in the park.

Monahan, a 38-year officer from the Bronx, was actually filmed hugging protesters and ‘taking a knee’ during a protest last month in Manhattan’s Washington Square Park. However, he also spoke out against a City Council bill introduced earlier this month banning the use of diaphragm-pressing restraint holds – typically involving pressing a knee into a suspect’s back – claiming criminalizing the tactic would be “dangerous.”

New York has seen a spike in crime led by a major uptick in shootings – June of 2020 was the most violent month since 1996 – exacerbated by bail reform, the coronavirus pandemic, and the devastating economic shutdowns that have plunged millions of Americans into poverty. At the same time, the police killing of black security guard George Floyd in Minneapolis in May has triggered months of sometimes-violent protests across the nation, accompanied by a steep rise in anti-cop sentiment. Monahan lamented earlier this month that “it’s tough to be a police officer now.”

Pro- and anti-police demonstrators also clashed in Brooklyn over the weekend, occasionally coming to blows, and a New York Post reporter was allegedly struck in the face by a protester at Manhattan’s City Hall on Monday. Mayor Bill de Blasio has drawn the ire of both sides as he refuses to make a firm commitment to backing either the police, the protesters, or the city business owners and residents caught between both – outside of cosmetic gestures like painting “Black Lives Matter” outside Trump Tower on Fifth Avenue, of course.