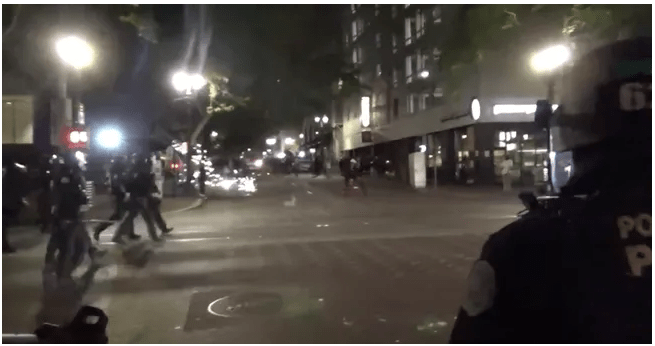 Antifa radicals have been attacking law enforcement for over 45 days in Portland, concentrating in the last couple of weeks on the federal courthouse, as we have reported.

Then on Saturday, it appeared that federal officers may have hit one of the radicals in the head with a less than lethal munition.

Here’s a sample of some of the “peaceful protest.”

The public is fed up with the leftists, even liberal citizens. But what has been the response of the local Democrats in control? Oregon Governor Kate Brown, U.S. Senators Ron Wyden and Jeff Merkley, along with U.S. representatives Earl Blumenauer and Suzanne Bonamici – all blamed the federal response and President Donald Trump for the “escalation in violence.” That takes some nerve, when in fact, it’s been radical extremists attacking the federal building for weeks and it’s the feds who should be demanding recompense from the state and the city for the failure to properly protect the building.

The federal officers have every right to defend the federal courthouse from attack but the liberal folks in Portland were more interested in trying to use it to attack Trump then really dealing with the problem.

So what did all that ridiculous pandering do?

It encouraged the radicals to set up another autonomous zone in the park in Lownsdale Square, across from the federal courthouse. They began setting up tents last night, the same area Occupy Portland used in 2011.

An unofficial Twitter page attributed to a group of anti-capitalist, anti-fascist teens who call themselves the Pacific Northwest Youth Liberation Front said protesters want to establish the Chinook Land Autonomous Territory, or CLAT, in downtown Portland. The Chinook people include several indigenous groups native to the Pacific Northwest.

“People are needed here ALL night long, especially in the early morning! Get on over rn! Bring some tents,” the Twitter page said, sharing an image of a barricade that read “ACAB,” an acronym meaning “All Cops Are Bastards,” and “Black Trans Lives Matter.”

They barricaded the area using “industrial kitchen appliances, road blockades, and flashing traffic signs” and also set several fires. They claim to be fighting for “total liberation” not seeming to understand what country they live in and that everyone already is free. They describe themselves as a “Decentralized network of autonomous youth collectives dedicated to direct action toward total liberation.”

This is the group seemingly largely behind these actions.

But progressive mayor Ted Wheeler is worse than Seattle’s Mayor Jenny Durkan ever was, if you can believe it. He’s allowed Antifa violence for years and they basically have had the run of the city long before the recent riots and violence.

What was the progressive mayor Ted Wheeler’s response to all this?

Unreal. He’s literally blaming the feds for the graffiti the radicals have sprayed on the building everyday. It’s maddening that there are such people in power, destroying what at one point was a beautiful city. You wonder how you get a city like Portland which is a descent into the maelstrom. This is why.

The federal government should send the bill to him.