If you miss Comet NEOWISE this July, you’ll have to wait 6800 years to view it. 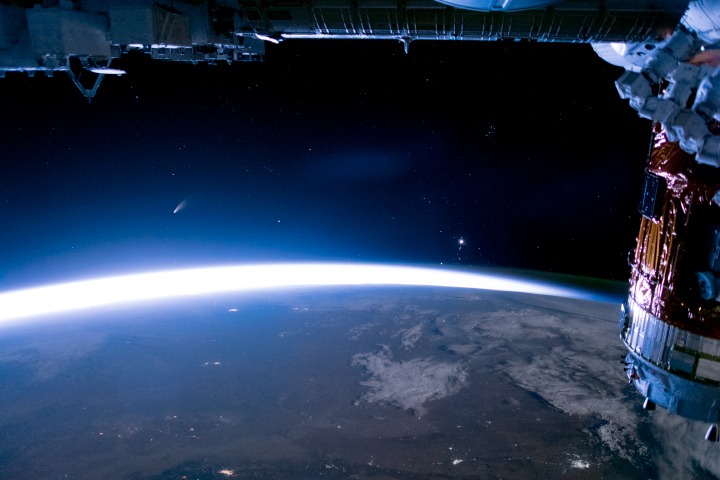 Look up toward the stars this month, and you just might spot the brightest comet to grace Northern Hemisphere skies in decades. In July 2020, comet NEOWISE (short for C/2020 F3 NEOWISE) has thrilled skywatchers in North America, in Europe, and in space. If you don’t spot the comet this time around, you won’t get another chance. It has a long, elliptical orbit, so it will be approximately 6,800 years before NEOWISE returns to the inner parts of the solar system.

The photo above and the time-lapse video below show NEOWISE as viewed from the International Space Station (ISS) on July 5, 2020. An astronaut shot more than 340 photos as the comet rose above the sunlit limb of Earth while the ISS passed over Uzbekistan and central Asia.

Comet Neowise has a nucleus measuring roughly 5 kilometers (3 miles) in diameter, and its dust and ion tails stretch hundreds of thousands to millions of kilometers while pointing away from the Sun. The icy visitor was discovered on March 27, 2020, by NASA’s Near-Earth Object Wide-field Infrared Survey Explorer (NEOWISE) spacecraft as the comet was headed toward the Sun. The comet made its closest approach to the Sun on July 3, and then turned back toward the outer solar system.

Comets are made of frozen leftovers from the formation of the solar system roughly 4.6 billion years ago. The masses of dust, rock, and ice heat up when approaching the Sun; as they get closer, they spew gases and dust into a glowing head and tail. Satellite data indicate the NEOWISE has a dust tail and possibly two ionized gas tails. The comet is made visible by sunlight reflecting off of its gas emissions and dust tail.

“It’s quite rare for a comet to be bright enough that we can see it with the naked eye or even just with binoculars,” said Emily Kramer, a co-investigator of the NEOWISE satellite, in a NASA Science Live webcast. “The last time we had a comet this bright was Hale-Bopp back in 1995-1996.” 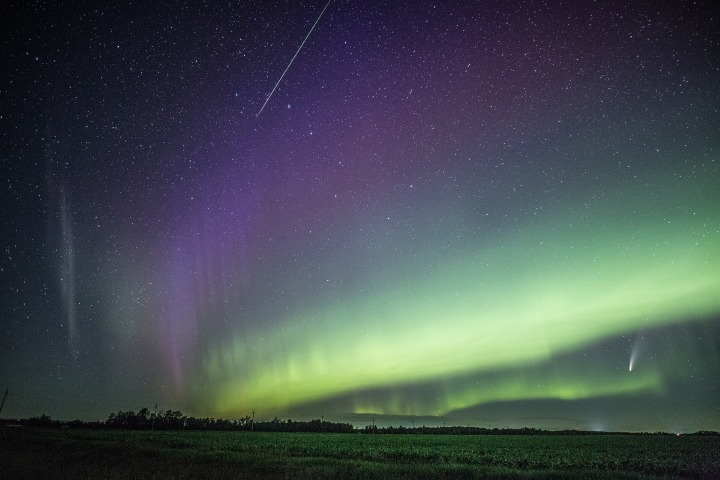 The photo above shows the comet (bottom-right) on July 14, 2020, against the backdrop of a green aurora in western Manitoba, Canada. The bright streak at the top is a meteor. The purple, ribbon-like structure is an aurora-like structure called STEVE (short for Strong Thermal Emission Velocity Enhancement), a phenomenon that was recently discovered with help from citizen scientists. Donna Lach, the photographer and an avid participant in the Aurorasaurus project, observed the scene for three hours and said the comet even out-shined the brilliant aurora at times.

NEOWISE is expected to make its closest approach to Earth on July 22, passing at a harmless distance of 103 million kilometers (64 million miles). From mid-July onward, viewers can spot the comet after sunset, below the Big Dipper in the northwest sky. For best viewing, make sure to find a spot away from city lights and with a clear view of the sky. While you may be able to see it with your naked eye, you might want to bring binoculars or a small telescope.

Astronaut photograph ISS063-E-39888 (top) was acquired on July 5th 2020, with a Nikon D5 digital camera using an 28 millimeter lens and is provided by the ISS Crew Earth Observations Facility and the Earth Science and Remote Sensing Unit, Johnson Space Center. The image was taken by a member of the Expedition 63 crew. Time-lapse animation by Sara Schmidt of the Earth Science and Remote Sensing group at NASA JSC. Aurora and comet photograph by Donna Lach, used with permission. Story by Kasha Patel.