How to best see Comet NEOWISE before it fades into space 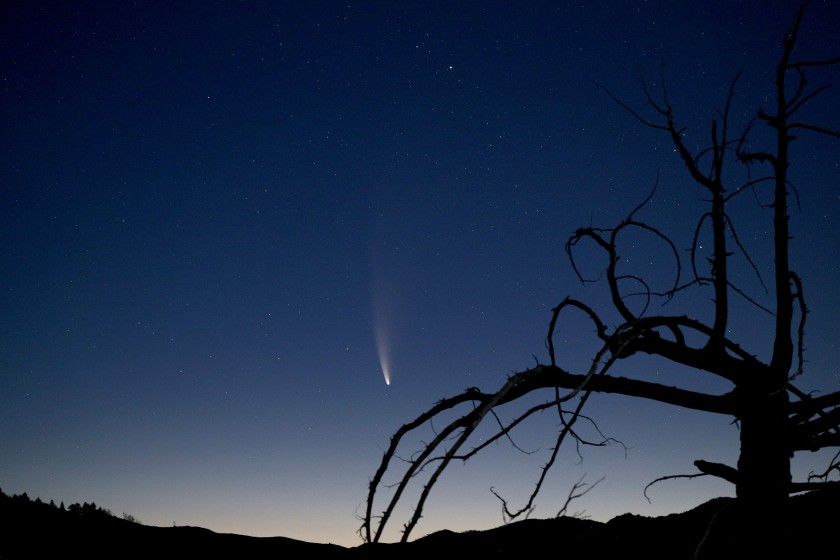 Comet NEOWISE, formally known as C/2020 F3, moves across the sky July 10 from Mount Wilson Road in the Angeles National Forest. The photo was taken with a four-second exposure.(Raul Roa / The Daily Pilot / Los Angeles Times)

Comet NEOWISE is putting on a spectacular fireball show in the night sky. Never heard of it? The glowing-tail beauty has been wowing comet watchers around the world this week. Comets don’t come streaking our way all that often, at least not bright ones you can see with the naked eye.

The essential weekly guide to enjoying the outdoors in Southern California. Insider tips on the best of our beaches, trails, parks, deserts, forests and mountains.

Comets ATLAS and SWAN held bright promise earlier this year after passing close to the sun. That didn’t happen to NEOWISE, which Space.com says has “emphatically” ended a quarter-century drought of spectacular comets. It’s hailed as the best show since the Comet Hale-Bopp in 1997.

What’s that name about?

Like all A-listers, the comet has a Southern California pedigree: The Jet Propulsion Laboratory in La Cañada Flintridge operates the deep space telescope that discovered the comet on March 27. The comet’s official name is C/2020 F3; the telescope’s acronym, NEOWISE, for Near-Earth Object Wide-field Infrared Survey Explorer, was added.

“In its discovery images, Comet NEOWISE appeared as a glowing, fuzzy dot moving across the sky even when it was still pretty far away,” Amy Mainzer, NEOWISE principal investigator at the University of Arizona, said on NASA’s website. “As soon as we saw how close it would come to the sun, we had hopes that it would put on a good show.” (Here are early photos of its discovery.)

The telescope started taking pictures December 2009, was turned off in February 2011, got rebooted and renamed in 2013, and has been producing millions of infrared images of distant comets and asteroids ever since.

Space.com describes NEOWISE’s most visually stunning trait as “a beautiful, gently curved tail of dust which many observers using binoculars and small telescopes have remarked has shown a noticeable yellowish tinge.” Got that? That’s what you’ll be looking for in the sky.

NASA Science Live will air an episode about NEOWISE at noon Pacific time Wednesday on the agency’s website as well as on its social media channels.

What’s the best time to see the comet?

Last weekend, NEOWISE was visible in the pre-dawn hours. Now it has flipped to evening mode, making for more dramatic viewing against the dark night sky. So peel yourself away from Netflix and go outside for a look. If you miss it, this comet won’t be back for about 7,000 years. 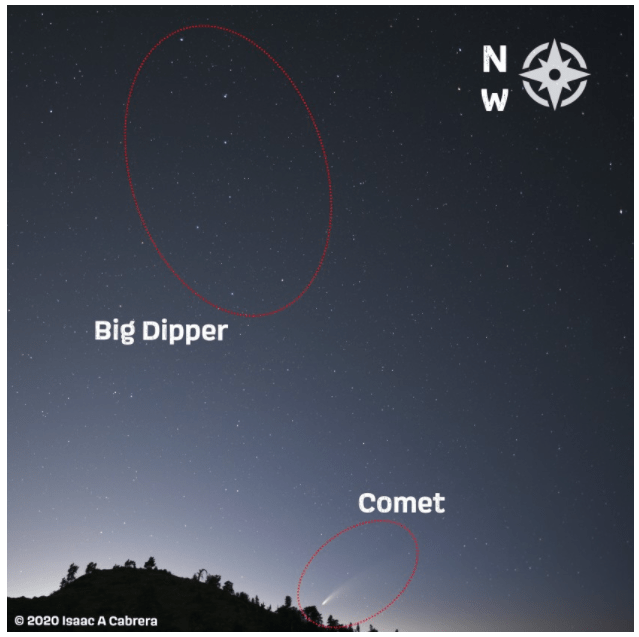 This photo illustration shows where to find Comet NEOWISE in the night sky.
(Isaac Cabrera)

Reader Isaac Cabrera photographed the comet 9:24 p.m. Tuesday night from a point in the San Gabriel Mountains. “It took me about half an hour to find the comet, since a lot of the guides I looked at online were not particularly helpful,” he wrote in an email. (Camera settings: f1.8, 20mm, 20s (exposure), ISO-400.)

NEOWISE will be brightest about an hour and a half after sunset between now and Sunday. Look to the north-northwest and it should be about 10 degrees above the horizon. It will come closest to Earth on July 22. More good news: The sky will be good and dark because the moon is in crescent mode and won’t cast light that could ruin your view.

The comet will begin to fade later in July, though still be visible with a small telescope until it disappears to the outer solar system around mid-August, according to Space.com.

Best ways to see the comet