This proves the Kenosha riots were an extremely organized, Soros-funded, terrorist operation!

Most of Kenosha Riot Arrests Come From Other Cities 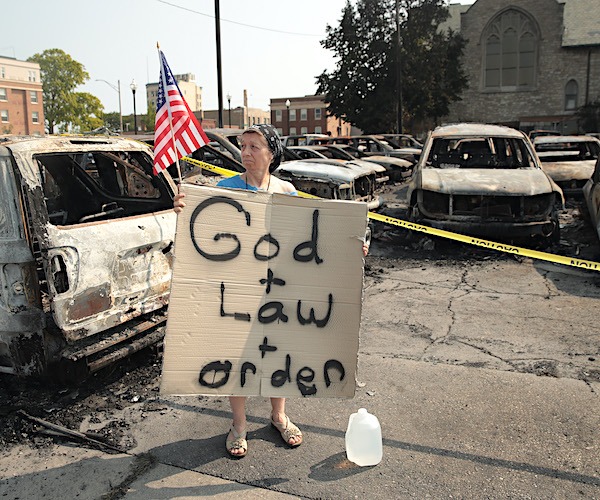 KENOSHA, WISCONSIN – AUGUST 24: A women holds a sign while standing in a used car lot with burned out cars after a night of unrest, on August 24, 2020 in Kenosha, Wisconsin. The unrest stemmed¬†from an incident in which¬†police shot a Black man multiple times in the back as he entered the driver’s side door of a vehicle. (Photo by Scott Olson/Getty Images)

One hundred seventy-five people have been arrested in the week of riots and protests in Kenosha, Wisconsin, that have erupted following a police shooting in the city of 100,000, the majority from outside the municipality’s borders.

More than 20 guns also have been confiscated as of 12:30 p.m. local time Sunday, according to a statement issued by the city’s police department, multiple outlets reported.

Law enforcement in the city located on the western shore of Lake Michigan about 30 miles south of Milwaukee and about 60 miles north of Chicago have arrested 102 people from 44 different towns and cities outside Kenosha. Charges have ranged from curfew violations to “carrying concealed weapons, burglary, and possession of controlled substances,” police said.

“We are currently calculating damage estimates to businesses. Kenosha Police will continue to share information when it becomes available,” read the statement.

In the first two days of rioting following the shooting, 34 fires were attributed to the rioting and 40 business were destroyed, Kenosha police said.

The mayhem followed the shooting of 29-year-old Jacob Blake by police, who were called to a residence Sunday for a report of a “domestic dispute” that involved a vehicle theft.

Police were aware Blake was wanted for on a warrant for felony sexual assault and was under a court order to not approach the home police were called to. The woman who placed the call later told police Blake had sexually assaulted her in her home.

Cops were attempting to arrest Blake on the felony sexual assault warrant on the street when he refused to obey police commands. Police say he was armed with a knife and could not be subdued despite being shot with a stun gun twice.