Are these devastating firestorms being geoengineered before a DEW arsonist triggers the conflagration?! 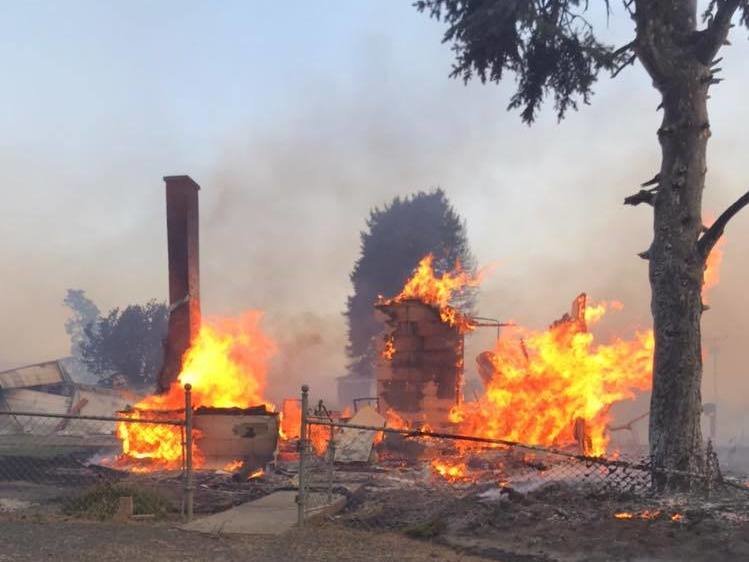 Almost every structure in the small farming town of Malden in eastern Washington state was destroyed by a fast-moving wildfire Monday as high winds created what officials described as a firestorm.

According to the Whitman County Sheriff’s Office, 80% of the town’s structures were destroyed. The town of about 200 people is 35 miles south of Spokane in an agricultural region known as the Palouse.

“The scale of this disaster really can’t be expressed in words,” Whitman County Sheriff Brett Myers said in a statement. “The fire will be extinguished but a community has been changed for a lifetime. I just hope we don’t find the fire took more than homes and buildings. I pray everyone got out in time.”

As of early Tuesday, there were no reports of injuries from the wildfire that swept through Malden.

Officials say the fire was fueled by high winds of up to 45 mph, standing timber and dry fields. Deputies went door to door and used PA systems on their patrol vehicles to tell residents to evacuate the area immediately. Within hours, most of the small town had burned to the ground.

Malden lost its fire station, post office, city hall, library and most of its homes, according to the sheriff’s office.

Myers said he believed all residents in the area had safely fled but couldn’t be sure, according to The Spokesman-Review.

“The fire was too hot and too quick to even get a count,” Myers said.

Malden was not alone in seeing catastrophe on Labor Day — a day Washington Public Lands Commissioner Hilary Franz described as heartbreaking and surreal, due to the intensity of wildfires and the speed with which they spread.

“Today alone, almost 300,000 acres in Washington have burned,” Franz said via social media channels. “Thousands of homes are without power. Many families have had to evacuate their homes and many homes have been lost.”

“At least 80 fires started in Washington in what officials call a historic fire event,” as Spokane Public Radio reports

They’re still taking stock in Whitman County, where the local emergency management agency, the sheriff’s office and fire officials planned to inventory buildings and attempt to contact and account for all residents on Tuesday.

Most of Washington remains under red flag warnings because of the high risk of wildfires. The National Weather Service has declared part of the state and parts of western Oregon as “extremely critical” fire areas.

The wind poses a double threat, as it can quickly propel fires and also frustrate attempts to fight them. The Cold Springs Fire sprinted 60 miles across Okanogan and Douglas counties in just 20 hours, Spokane Public Radio reports. And the winds drove a mass of smoke and sand into the air, forcing officials to ground firefighting planes and helicopters.

“Really our actions are limited to keeping people out of harm’s way and working the edges of the fire as best we can,” Russ Lane, a fire manager with the Washington State Department of Natural Resources, tells the Spokane station.

Franz and other officials are pleading with residents to avoid any activities that could cause sparks and ignite a new blaze.

“We’re still seeing new fire starts in every corner of the state,” Franz said. She added that 90% of the wildfires in Washington’s recorded history have been caused by people.

In addition to Washington and Oregon, parts of California, Arizona and Nevada are seeing “critical fire-weather conditions” the National Weather Service says, citing an ongoing heat wave, very dry fuels, and strong winds that could gust to above 60 mph in some areas.