Even the mainstream media is reporting the utter firestorm devastation which can only be caused by geoengineering and DEWs.

Like ‘a Bomb Went Off’: An Oregon City Destroyed as Wildfires Devastate West Coast
‘WAKE-UP CALL’

President Trump arrived in California on Monday to address the catastrophic wildfires that have already claimed 35 lives along the West Coast. 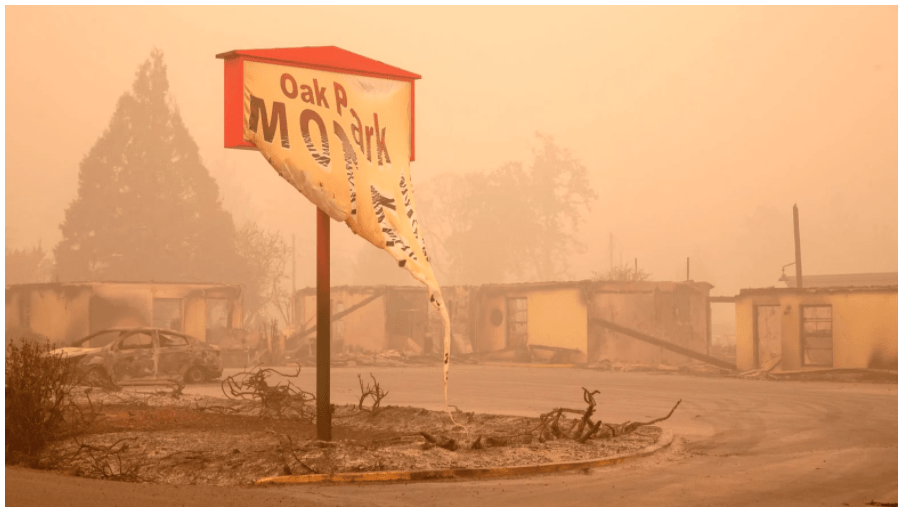 As of Sunday afternoon, there were only about 20 buildings still standing in the city of Detroit, Oregon.

The wildfires raging along the West Coast hit the small, rural enclave three hours outside of Portland over the weekend, burning a majority of the community’s structures—including City Hall, where the fire department’s office is based. Locals have suggested the destruction was as if “a bomb went off.”

“We have approximately 20-25 structures still standing, and the rest are gone,” the Idanha-Detroit Rural Fire Protection District said on their Facebook page, noting that several firefighters currently on the frontlines of these massive blazes had lost their own homes. “I know this must be frustrating for everyone. Fires are still actively burning in Detroit and have kept firefighters busy. Our primary focus is protecting the structures that are still standing.”

Elizabeth Smith, who left her house last week after evacuation orders in Detroit went from caution to “go now” in a matter of hours, told KATU-TV she lost everything from the blaze.

“Our homes are absolutely destroyed. I’ve seen a few videos and photos and my lovely little house that we remodeled 12 years ago in this beautiful canyon area is absolutely flattened,” Smith said.

Smith and her neighbors from the small Oregon city are just some of the hundreds of thousands of residents across the West Coast who have lost their homes in recent days to these disastrous wildfires, which have scorched communities in fallen ash and smoke. So far, 35 people have died from the fires—including at least 24 in California, 10 in Oregon, and one child in Washington. Many residents near the 39 large fires in California, Oregon, Washington, and Colorado remain under evacuation orders, according to the National Interagency Fire Center.

And as upwards of 30,000 emergency personnel continue to fight blazes that have claimed more than 4.6 million acres in 10 states in recent weeks, experts on Monday warned that unpredictable wind gusts and drier weather may only make this disaster worse.

“This week, the weather has shifted so winds we have been seeing moving east to west are now going to change to come from the west—meaning it will completely shift the emergency response,” Meg Krawchuk, an associate professor at the Oregon State University College of Forestry, told The Daily Beast on Monday. “While the winds could be positive, because it may be precipitation, they are also completely changing the course of these fires. Essentially, it means we will have two-headed fires.”

The massive blazes came after a slew of “complex” fires in California, stemming from an unprecedented lightning event in the state that forced thousands to evacuate and scorched hundreds of thousands of acres. Some of the worst fire conditions on Monday continued in Oregon, where more than 30 active fires had burned 900,000 acres across the state. Officials said the Beachie Creek fire, a blaze near Portland that had destroyed almost 200,000 acres and killed four people, was showing no signs of slowing down.

“Warmer and drier conditions from the temperature and winds create drier fuel, which has a short ignition time and catches faster. The winds dry in an increasing way, giving oxygen to the flame and carrying it farther to spread more rapidly,” Krawchuk told The Daily Beast. “This is definitely a wake-up call for a lot of people who don’t usually think about fire.”

The fires along the West Coast have forced state officials to scramble to contain the domino effect, expending emergency services already strained by the coronavirus pandemic and requesting help from neighboring states and the federal government.

And relief may be several days away, according to experts who feared that while the winds would disperse some of the smoke smothering the Bay Area and other parts of the Pacific Northwest, the dry brush might only further fan the flames. The winds, caused by a slow-moving storm system off Oregon’s coast, were expected to last throughout the week—pushing smoke toward the Midwest and Canada.

After a series of rallies in Nevada over the weekend, President Donald Trump traveled to California on Monday for a briefing on the ongoing wildfires—a natural disaster many Democratic lawmakers say represents the latest evidence of catastrophic climate change.

Trump, who has been openly skeptical of climate science, again argued Monday that forest mismanagement is the primary culprit for the catastrophic fires that have raged on the West Coast, a claim he’s repeatedly made over the last few years.

But California Gov. Gavin Newsom, who is slated to meet with Trump on Monday, blasted the “ideological BS” of climate change deniers—and stressed that these fires were a case study for global warming.

During their meeting on Monday, Newsom acknowledged the need for forest management during this ongoing crisis but stressed to the president that “that climate change is real and that is exacerbating this.”

According to the Associated Press, Trump nodded during the California lawmaker’s plea but did not respond. A few minutes later, California Secretary for Natural Resources Wade Crowfoot also urged the president to recognize climate change, prompting Trump to insist that the weather will “start getting cooler, you just watch.”

“I wish science agreed with you,” Crowfoot said, to which Trump responded, “Well, I don’t think science knows actually,” despite countless evidence and federal agencies suggesting the opposite.

Alongside the massive fires raging across the state, smoke from these blazes has polluted the air to harmful levels in various major cities like Los Angeles, San Francisco, Seattle, and Portland.

“We aren’t out of the smoke, yet. Our air is hazardous statewide this morning. Stay indoors as much as possible,” Washington Gov. Jay Inslee tweeted on Monday.

Officials in Detroit, Oregon, were also concerned about the city’s air quality, begging residents not to return to what remained of their homes because “carbon monoxide alarms in standing structures have been activating due to the heavy smoke.”

Democratic presidential candidate Joe Biden slammed Trump on Monday for his denial of climate change, calling the president a “climate arsonist” for ignoring science as “wildfires are burning the suburbs of the west.”

Maureen Kennedy, an assistant professor at the University of Washington Tacoma who specializes in forest management, told The Daily Beast that previous research linked wildfire smoke to various health risks like cardiac and respiratory distress—a deadly side-effect during the ongoing coronavirus pandemic already plaguing the country. Kennedy added that these “presented fires” and the long-term implications are “salient evidence that climate change is here.”

Oregon Gov. Kate Brown on Sunday also stressed that the fires only bolster climate science, stating the devastation that continues to rage across the state was a “wake-up call.”

“This is truly the bellwether for climate change on the West Coast. This is a wake-up call for all of us, that we have got to do everything in our power to tackle climate change,” Brown said in an interview with CBS News, before noting that “decades of mismanagement of our forests in this country” also contributed to the wildfires.

For Krawchuk, the frustration over these disastrous fires stems from the reality that the fire community has been thinking about these “warnings year after year after year.”

“It’s sort of scary of how we actually make this actionable because we have been talking about it for too long,” she explained. “The idea that this is the wakeup call is optimistic and now the issue is making this a catalyst. We need all hands on deck.”