This was the Democrat SCOTUS sabotage strategy all along! 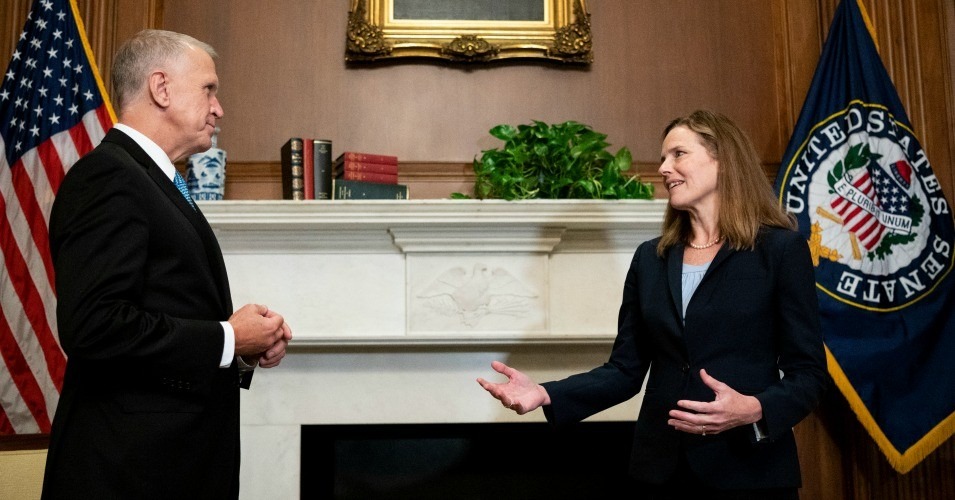 “Rushing to have the hearing under these circumstances just shows that Republicans know they won’t have the votes after Election Day.”

Democratic lawmakers and progressive advocates demanded on Friday and into Saturday that the Senate Judiciary Committee postpone Judge Amy Coney Barrett’s confirmation hearing for the U.S. Supreme Court after at least three Republican senators tested positive for the coronavirus.

Johnson did not attend the White House gathering last Saturday where President Donald Trump announced his nomination of Barrett, but he has been attending lunches with other Republican senators three times per week, including this past week. Lee and Tillis have also been attending the gatherings, suggesting that they may have exposed several of their Senate colleagues. Democratic senators have suspended their in-person lunches in light of the coronavirus pandemic.

The progressive advocacy group Demand Justice was among those who called on the Senate Judiciary Committee to postpone Barrett’s hearings, which are set to begin Oct. 13.

“They need to postpone the hearing because voting on Barrett before the election would gravely damage the legitimacy of the Court itself,” wrote Susan Hennessey, executive editor of Lawfare. “Rushing to have the hearing under these circumstances just shows that Republicans know they won’t have the votes after Election Day.”

Johnson’s diagnosis calls into question—even if the Senate Judiciary Committee moves forward with a virtual hearing—whether Barrett could be confirmed before Election Day, one month from Saturday.

As CNN reported Saturday, “If the three senators remain out this month, it would effectively prevent Barrett from being confirmed to the Supreme Court until they return, which could be after Election Day during a lame-duck session.”

“A lame-duck confirmation is a situation that GOP leaders are eager to avoid in case they lose control of the chamber next month,” reported Manu Raju and Lauren Fox. “The fear is that one or two GOP senators may break ranks after seeing the election results and citing the will of the voters.”

Two Republican senators—Sens. Susan Collins (R-Maine) and Lisa Murkowski (R-Alaska) have already indicated they do not support moving forward with Barrett’s confirmation process before the election, but have not ruled out a confirmation during a potential lame-duck session should Trump lose to Democratic candidate Joe Biden.

Sen. Elizabeth Warren (D-Mass.) tweeted late Friday that with at least two Covid-positive Judiciary Committee members, “The Senate cannot safely proceed on the Supreme Court nomination. We must focus on containing this virus to protect members and staff.”

Sen. Dianne Feinstein (D-Calif.), ranking member of the Judiciary Committee, issued a joint statement Friday along with Senate Minority Leader Chuck Schumer (D-N.Y.), noting the “bipartisan agreement that a virtual confirmation hearing for a lifetime appointment to the federal bench is not an acceptable substitute” for an in-person hearing and calling on committee Chairman Lindsey Graham (R-S.C.) postpone the hearing.

“All circuit court nominees have appeared in person during the pandemic, and there is far more at stake for the American people with this Supreme Court nomination, including the Affordable Care Act being struck down and more than seven million Covid survivors being denied health coverage,” the lawmakers said. “It’s critical that Chairman Graham put the health of senators, the nominee and staff first – and ensure a full and fair hearing that is not rushed, not truncated, and not virtual. Otherwise this already illegitimate process will become a dangerous one.”

David Segal, executive director of progressive campaign group Demand Progress,called for the hearing to be postponed while urging voters to “prepare to push for further postponement thereafter.”

Yep postpone the hearing – and prepare to push for further postponement thereafter. Call your senators, no matter where you are, at 202-899-8938. (Will get script to use once you dial.) https://t.co/hj8UeClo5p

“Call your senators, no matter where you are,” Segal tweeted.