Just like the planned genocide in Paradise, CA, towns in Australia are experiencing the same stealthily set firetraps!

A “shift change” for firefighters in Mallacoota will be carried out by air on Wednesday. 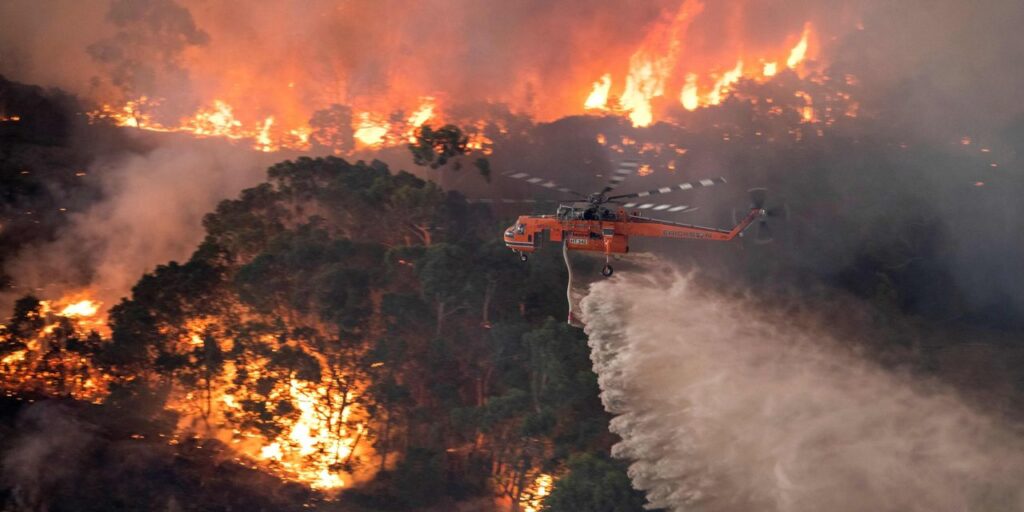 A new team of firefighters will be helicoptered into the Victorian coastal town of Mallacoota to assist the 4,000 people who remain stuck there after the region was ravaged by fire.

Premier Daniel Andrews told reporters on Wednesday “we’ve got people that are isolated in the middle of the fire”.

“We’ve got choppers taking 90 firefighters out of the Mallacoota area, they can’t be removed any other way – we’re essentially doing a shift change by the air,” he said.

View of active fires from parents balcony on Karbeethong Rd in #Mallacoota – that’s just one bad wind change from becoming a serious problem for Karbeethong. pic.twitter.com/1tqghhzvgu

“We’ve never done that before, getting firefighters that are essentially isolated in that Mallacoota community out and fresh teams going in.

“It’s one example of how complex and how challenging these East Gippsland fires are now and will be for a considerable period of time.”

Emergency commissioner Andrew Crisp told reporters more than 500,000 hectares have been burnt out in Victoria, mostly in the East Gippsland area.

“With Mallacoota, we know they have a significant amount of water, but we know we need to get supplies to them,” he said.

Mr Crisp said a barge was being loaded in Melbourne with supplies for “about two weeks”, including food, water and 30,000 litres of fuel.

“Saturday is a significant day for us. It’s about what we do to enable us to be in the best position we can to Saturday,” he added.

Defence force aircraft including Black Hawk helicopters are expected to land in the east of the state on Wednesday with other aircraft and naval vessels due in the coming days.

The aircraft are expected to help move fire crews, supplies and help with evacuations as needed.

This photo needs to be the front page of every paper in Australia for the first day of the new decade. Welcome to the 20’s, Australia. #mallacoota #australiaburns pic.twitter.com/6bcswM3yeU

Naval vessels including the HMAS Choules left Sydney bound for the East Gippsland coast on Tuesday evening and training vessel MV Sycamore has also been deployed.

It comes as thousands of people remain stranded in remote communities because of blazes as firefighters continue their efforts.

Lakes Entrance was given some relief as safety assessments allowed the Princes Highway to re-open between Bairnsdale and Lake Tyers Beach Road on Tuesday evening, allowing people to leave the area.

Sister in a BRIGHT ORANGE work suit blending in with the #Mallacoota sky pic.twitter.com/SfK93GhbUU

There had also been “relatively good news” for Mallacoota and Corryong after a wind change meant the worst of the blazes passed them.

“The wind change has gone through and it is now bypassed that town,” Country Fire Authority chief officer Steve Warrington said of Mallacoota.

“I understand there was a public cheer down at the jetty when that was announced.”

The wind change also helped firefighters battling a blaze in the northeast Victoria-NSW border at Corryong.

But he confirmed there were property losses on the outskirts of the townships, despite the good news.

The state government also announced a bushfire response task force it vows will avoid red tape in dealing with fallout from the blazes.

The developments come after lightning sparked more than a dozen new blazes in Victoria’s alpine region.

Four people remain missing in the fires, with Premier Daniel Andrews earlier confirming they are not firefighters.

State cabinet’s security and emergencies management committee met on Tuesday afternoon and established the bushfire response and recovery task force, to be led by Mr Crisp.

Victorian Emergency Services Minister Lisa Neville said the task force was aimed at ensuring “no barriers, no red tape, no bureaucracy” get in the way of meeting immediate needs and a broader response.

Authorities have started the process of assessing how many properties have been destroyed by the fires, which grew rapidly overnight as self-generated weather systems sparked dry lightning.