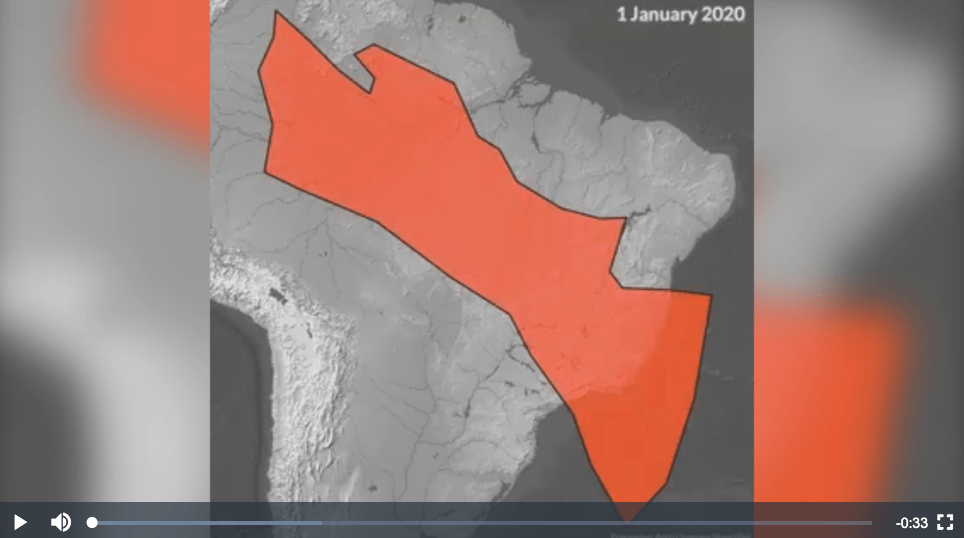 The plume of smoke would cover Europe, west to east, experts have calculated as well as the width of South America

People queue for hours for food with temperatures forecast to rise to danger levels again, in scenes likened to a war zone

Bushfires ravaging Australia have now killed at least 17 people and created a plume of smoke thought to be present over an area greater than that of Europe.

The government has deployed military ships and Navy ships and military aircraft were bringing water, food and fuel to towns where supplies were depleted and roads were cut off by the fires.

Authorities confirmed three bodies were found on Wednesday at Lake Conjola on the south coast of New South Wales. More than 175 homes have been destroyed in the region.

Antti Lipponen, a physicist and research scientist at the Finnish Meteorological Institute, said the plume was 14 times the size of Japan, and superimposing it over a map of Europe, showed it would stretch from Iceland to Turkey.

The size of the cloud symbolised the size of the emergency in southern Australia, where it is feared conditions could worsen further in the next 48 hours.

Forecasters predict very hot and windy conditions for the south on Friday, with temperatures again set to reach 45C or more, and dangerous bushfire conditions for eastern Victoria and New South Wales (NSW) on Saturday. Thousands of firefighters are battling more than 100 blazes in the state of New South Wales (NSW) and nearly 40 in Victoria on Wednesday, with new fires starting daily.

A race against time is under way to rescue by air or sea thousands of people who have fled to beaches on the country’s south and east coasts, as well as deliver supplies. Some 4,000 people in the coastal town of Mallacoota, Victoria, fled to the shore as winds pushed a fire towards their homes.

Victoria emergency commissioner Andrew Crisp told reporters the Australian Defence Force was moving naval assets to Mallacoota on a supply mission that would last two weeks and helicopters would also fly in more firefighters since roads were inaccessible.

“I think that was our biggest threat in terms of what are we doing with the children if we need to go in the water to protect ourselves given the fact that they are only 1, 3 and 5,” tourist Kai Kirschbaum told ABC Australia. “If you’re a good swimmer it doesn’t really matter if you have to be in the water for a longer time, but doing that with three kids that would have been, I think, a nightmare.”

Supermarkets were closed and people were queueing for up to three hours to get food in some areas of New South Wales. On New Year’s Day, it was estimated 50,000 homes were without power, as phone networks were down and fuel ran low. Some residents were forced to camp on wharves after multiple fires near Mallacoota, cutting off road access. Nearby, 100 people took shelter in a school.

Conditions cooled on Wednesday, but the fire danger remained very high across Victoria state, where four people are missing.

Since the fires started in September more than 1,000 homes have burnt, with the blazes destroying communities while wiping out wildlife in unprecedented numbers.

“It was like a war zone. Or something out of a movie,” said Paul Murphy, from Lake Conjola.

More than a dozen people were reported to be trapped in the Belowra Valley, inland in NSW, after fires cut off road access to the area and wrecked homes. There were fears 600 cattle would die within days without emergency feed.

Pippa Biglia told The Sydney Morning Herald her neighbour had been killed. “It burned through his place and in a matter of minutes it was at my mum and dad’s house,” she said. “It came from every direction and there was nothing anyone could do about it.”

In the city of Bairnsdale in East Gippsland, Victoria, donations of clothes, blankets and long-life food were being collected for people who had lost everything. More than 200 homes in East Gippsland have been razed to the ground.

Even with three months of summer to go, the early start to Australia’s summer wildfires has led authorities to rate this season the worst on record and sparked debate about whether Prime Minister Scott Morrison’s conservative government has taken enough action on climate change. Australia is the world’s largest exporter of coal and liquefied natural gas, but Mr Morrison rejected calls last month to downsize Australia’s coal industry.

Up to 500 million mammals, birds and reptiles – including 8,000 koalas – have been killed, say ecologists from Sydney University, prompting fears entire species of animals and plant life may be lost for ever.

More than 300 baby flying foxes have been abandoned by their mothers trying to survive, experts said.

Jenny Packwood, a wildlife rescuer, told the Herald: “Mothers are abandoning babies at two weeks after birth because there is no food for them. Last week we had 300 come in, and we’ve been flat out feeding since then.

“I’ve never seen anything like this before – we’re calling it a starvation event.”

Other experts told how the wildfires had obliterated all the small creatures that keep forests alive, leaving species such as bats vulnerable to local extinction.

Koala Crisis wrote on Facebook: “Not one carer KC has spoken to has seen bees, insects, grubs, worms, snails, beetles, millipedes, for months. Nothing struggles through the dustbowls which are now covering millions of hectares in all states.

“There’s no grass for the ’roos, no insects for the birds, the leaves on eucalypts are brittle, ensuring starvation for koalas, gliders, possums, birds, insects.”

The leader of the minor Australian Greens party, Richard Di Natale, has demanded a royal commission, the nation’s highest form of inquiry, on the wildfire crisis.

“If he (Morrison) refuses to do so, we will be moving for a parliamentary commission of inquiry with royal commission-like powers as soon as parliament returns,” Mr Di Natale said in a statement.

The Independent has asked the Australian government to respond.