BUSHFIREgate: For a cataclysmic bushfire season that began in August 2019, it took the Australian government until January 2020 to declare an emergency!

State of emergency declared in parts of Australia ravaged by wildfires 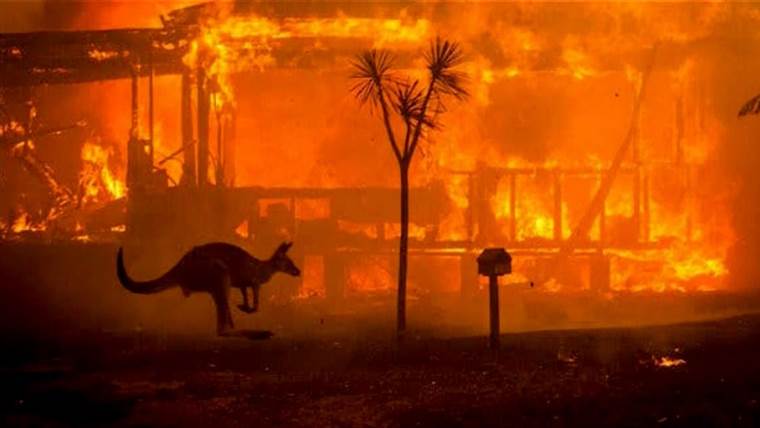 At least eight people have died since Monday as the wildfires are expected to worsen across Australia.

A weeklong state of emergency has been called in the Australian state of New South Wales as deadly wildfires continue to ravage communities, forcing thousands from their homes.

At least eight people have been killed by the fires in the eastern states of New South Wales and Victoria since Monday, including volunteer firefighters, officials have said. At least 17 have died since the fires began.

The emergency period begins on Friday and marks the third time such a declaration was made since the fires began in November.

Gladys Berejiklia, the state governor, told a press conference: “We don’t take these decisions lightly but we also want to make sure we’re taking every single precaution to be prepared for what could be a horrible day on Saturday.”

This a couple of hours after the Wingan fire started and while there were evacuations going from the coast we were working to slow the fire to give them time to get out. Sunday 29th late afternoon. This same fire has now reached Mallacoota. pic.twitter.com/2OzEnMX3Mj

In the coastal town of Mallacoota, Victoria, where roughly 4,000 people were stranded on the beach while trying to escape the flames earlier this week were finally being relocated by the country’s Defence Force on Thursday.

An emergency declaration was also made in the Australian Capital Territory, which includes Canberra, in response to thick smoke and dangerously poor air quality. The smog resulted in the cancellation of Canberra’s New Year’s Eve celebration and national parks and public libraries in the region have been closed to encourage people to stay indoors.

Conditions are anticipated to worsen in the coming days. Australia’s Bureau of Meteorology said temperatures are expected to soar above 104 degrees in western parts of the country Thursday, while similar temperatures are forecast in parts of New South Wales and Victoria into the weekend.

The fires are in part the result of a prolonged drought. The months of January through November were the second driest period on record since 1902, the Bureau of Meteorology said.

Average rainfall has also been down most months nationwide since early 2017. New South Wales, in particular, has seen three years of rainfall falling short by about 5 inches of the historic average.

The country also recorded its hottest day in mid-December at 107.4 degrees.

In addition to the fires, the drought has left the country with low drinking water supplies. Its total storage was sitting at only 45.8 percent as of Wednesday, down 8 percent from last year. New South Wales is seeing the worst levels, with water storage down to 24.5 percent.

Experts warn that these extreme weather conditions are a mark of climate change.

But the country’s Prime Minister Scott Morrison has said there were “many other factors” responsible for the fires, and the link to climate change is not credible.

The public has also expressed outrage over the government’s response, with the hashtags #NotMyPrimeMinister and #ScotMoResign trending. On Thursday, an angry group of residents in New South Wales confronted Morrison yelling expletives over their frustration of rural fire crews not receiving enough funding and resources.

“No, you’re an idiot mate. You really are,” one man was heard shouting in the town of Cobargo, captured in video by the Australian Broadcasting Corporation. “You won’t be getting any votes around here buddy,” another man said.

Morrison responded saying he understood the “very strong feelings that people have, they’ve lost everything.”

The government has committed financial support of up to $4,200 for volunteer firefighters across the country to compensate for lost income during their service.

Thirty-nine firefighters and two liaison officers from across the United States also arrived in Melbourne Thursday to support the more than 1,000 local crew. Another 71 firefighters from the U.S. and Canada are set to arrive in Australia next week.

The fires have had far-reaching effects. In New Zealand, snow on the mountains of South Island approximately 1,250 miles away has turned brown due to the smoke and dust blowing from the flames, according to the local forecaster Weather Watch.