Why Doesn’t Press Ask Kamala Harris About Covering Up Sex Abuse Of Children?

by Jeff Dunetz
THE LID 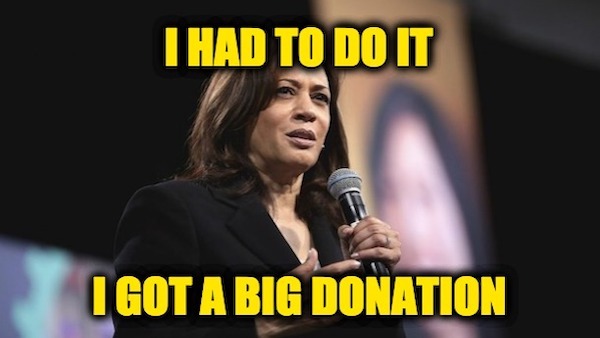 Since the day she was named Joe Biden’s V.P. Kamala Harris (D-CA), the mainstream media has described Kamala Harris as a “moderate” who is so wonderful she practically walks on water. Sadly the media doesn’t vet Democrats, because if they did some vetting of Harris’ history as a prosecutor they would have discovered her disturbing record as the San Francisco DA–She refused to pursue child molestation criminal cases against Catholic priests investigated by her predecessor And when the victims asked her for help with their civil cases against those molesters the victims say she covered up the evidence. Coincidently (if you believe in coincidences) Kamala Harris received substantial campaign donations from people and organizations associated with the accused molesters and their defense.

In his book, Profiles in Corruption: Abuse of Power by America’s Progressive Elite, Peter Schweizer unveils how Harris refused to pursue the case. And also exposes the fact that many of the law firms and lawyers who were representing the archdiocese on a variety of legal matters — including priests that had been identified as possible culprits — gave significant contributions to Harris’s political campaign. Some of them had never given contributions to a race like this before, but they came up with the cash for Kamala Harris.

Eventually, the archdiocese turned over the documents, and they were horrific. Supposedly the papers revealed the names of forty current and ex-priests who were accused of sexual abuse. DA Hallinan took the docs and began the process of bringing them to justice,

However, many of the cases were past what had been the statute of limitations. And just as the cases were heating up, the U.S. Supreme Court decision overturned a 1994 California law that retroactively eliminated the statute of limitations for sexual abuse cases. So instead of criminal prosecution for the older cases, Hallinan was forced to change his strategy. He wanted to hold the offenders accountable by releasing the clergy abuse files to the public and aiding the victims in civil cases.

But then Terence Hallinan made a big mistake. He lost his reelection bid to Kamala Harris. Of course, she had a little help from the local Catholic organizations that were freaking out over the prospect for Hallinan releasing the documents and helping the abuse victims. As Peter Schweizer explained in Profiles in Corruption: Abuse of Power by America’s Progressive Elite:

Harris had no particular ties to the Catholic Church or Catholic organizations, but the money still came in large, unprecedented sums. Lawyer Joseph Russoniello represented the church on a wide variety of issues, including the handling of the church abuse scandal. He served on the Catholic Church’s National Review Board (NRB) of the U.S. Conference of Catholic Bishops. The purpose of the NRB was to review Catholic Church abuse cases. Russoniello was also a partner in the San Francisco law firm Cooley Godward. Russoniello donated the maximum amount by law to her campaign, $1,250, and his law firm added another $2,250. He also sat on Harris’s advisory council when she was San Francisco, district attorney. Another law firm, Bingham McCutcheon, which handled legal matters for the archdiocese concerning Catholic Charities, donated $2,825, the maximum allowed. Curiously, Bingham McCutcheon had only donated to two other candidates running for office in San Francisco before, for a total of $650. As with Russoniello, their support was unusual.

Another law firm, Arguedas, Cassman Francisco priest against abuse claims at the time. They donated $4,550 to Harris. The lawyer in the case, Cristina Arguedas, also served on Kamala Harris’s advisory council.

Beyond these law firms, board members of San Francisco Catholic archdiocese–related organizations and their family members donated another $50,950 to Harris’s campaign.

We don’t know if it was 100% a quid pro quo, but it certainly smells like it because after she took office,  the investigations of the abusers stopped as did the cooperation with the civil suits. While her predecessor was going to release the papers from the archdiocese, Harris refused. “District Attorney Harris focuses her efforts on putting child molesters in prison,” her office claimed. “We’re not interested in selling out our victims to look good in the paper.” However, victims and victims advocates wanted the information released. For example:

They’re full of shit,” said Joey Piscitelli [a victim] and the northwest regional director of Survivors Network of Those Abused by Priests (SNAP), the largest and most active victims group. “You can quote me on that. They’re not protecting the victims.”

Rick Simons, an attorney who represented multiple victims of clergy abuse, also attacked Harris’s actions. Hiding the records “shows policy of ignoring the rights of children by one of the largest institutions of the city and county of San Francisco, and in the Bay Area.”

D.A. Kamala Harris refused to help the abuse victims in their civil actions. Interviewed by the liberal Intercept, victims spoke the refusal of Kamala Harris to give them access to the archdiocese files that would help them with their cases, or even talk to them when they asked for help:

“It went from Terence Hallinan going hundred miles an hour, full speed ahead, after the Catholic Church to Kamala Harris doing absolutely nothing and taking it backwards hundred miles an hour,” said Joey Piscitelli, a sexual assault survivor, who a jury found had been molested as a student while attending Salesian College Preparatory, a Catholic high school in Richmond, California.

Piscitelli had met with Hallinan’s office to discuss his case and the ongoing investigation into the church. But, he said, when Harris took over, his access to the office was shut off and his requests for clergy abuse files were ignored. Piscitelli resorted to handing out flyers and picketing outside the district attorney’s office on San Francisco’s McAllister Street.

When Piscitelli was asking Kamala Harris for help, his abuser was working at the Saints Peter and Paul Church in San Francisco, a position that placed him in an environment filled with children. In other words, Harris didn’t even care that the man was in another location where he could abuse kids.

Dominic De Lucca, a Burlingame, California, resident who says he was raped by a local priest when he was 12 years old, also said he was shocked that Harris declined to aggressively pursue clergy abuse cases and refused to release the files. “I remember Kamala Harris,” said De Lucca. “She didn’t want to have any meetings.” He went on, “She wanted the public to think this is an issue that happened years ago, that it doesn’t happen anymore. Let’s just move on.”

Terence McAteer, a resident of Nevada City, California, says he was raped as a child by Austin Peter Keegan, an infamous San Francisco priest. McAteer said he sees no value in Harris’s decision to conceal the clergy abuse files, which had been used to indict his abuser but remain secret to this day. “Why not tell the story?” said McAteer. “I have no problem with my file being released. I don’t have any great secrets. It’s already in the newspaper. I think the whole cloak of secrecy with the Catholic Church needs to be exposed.”

Several survivors of clergy abuse said they believed that Harris had declined to release the files in deference to the Catholic Church, which has historically held sway as a major political force in San Francisco.

The Intercept published a video of its interview of Joey Piscitelli. The video is at the bottom of this post.

Schweizer reported that “in April 2010, a journalist with the San Francisco Weekly asked for the records through California’s Public Records Act. Harris’s office denied the request, offering conflicting explanations as to why they could not provide them.

Even after Kamala Harris left office, the records couldn’t be shared because they disappeared “In 2019, I [Peter Schwiezer] requested those records through a California attorney. The San Francisco district attorney’s office responded that they no longer had them in their possession. Were they destroyed? Were they moved somewhere else? It remains a disturbing mystery.”

Look, the above story is crucial, especially in the context of the 2020 election.

It is another example of how the mainstream media covers for liberal candidates. If Kamala Harris was a Republican, the fact that she threw sexual abuse victims under the bus and seems to have done it for campaign donations would be front-page news in the N.Y. Times and the Washington Post. It’s not like it was a secret, Peter Schweizer’s book,  Profiles in Corruption: Abuse of Power by America’s Progressive Elite was a best seller.

Obviously, I don’t agree with Kamala Harris’ extreme leftist political positions, But IMHO this is much worse. How can any human being ignore the cries of sexual abuse victims? They were children for heaven’s sake.  When she took over from Terence Hallinan, Kamala Harris had all the information to help the victims, but she did nothing except hide the evidence. Heck, the Democrats tried to impeach a president for making a phone call they didn’t like, but at their convention, they nominate a woman who covered up child molestation, for Vice President. That ranks only slightly higher than the molesters themselves.

And one last thing. Most of the information in this post came from Peter Schweizer’s book,  Profiles in Corruption: Abuse of Power by America’s Progressive Elite. My post doesn’t even cover everything the book reveals about Harris, and there’s much more. Via Peter’s painstaking research, his tome shows corrupt acts by Joe Biden, Cory Booker, Elizabeth Warren, Bernie Sanders. Sherrod Brown, Amy Klobuchar, and Los Angeles Mayor Eric Garcetti.

Regular readers of this site know I am a big fan of Peter Schweizer’s work. Like much of his previous work, Profiles in Corruption: Abuse of Power by America’s Progressive Elite is a must-read for anyone who believes it wrong when those with political power get to operate by a different set of rules than us, regular people. To be honest, I can’t wait for the next one.

The video below is the Intercept interview of Joey Piscitelli:

During her decade-and-a-half tenure as a chief prosecutor, Harris would fail to prosecute a single case of priest abuse and her office would strangely hide vital records on abuses that had occurred, despite the protests of victims’ groups.

Harris’s predecessor as San Francisco district attorney, Terence Hallinan, was aware of and had prosecuted numerous Catholic priests on sexual misconduct involving children. And he had been gathering case files for even more… Hallinan’s office had launched an investigation and quickly discovered that the San Francisco Archdiocese had extensive internal records concerning complaints going back some seventy-five years. In spring of 2002, Hallinan demanded the church turn them over to his office.