Who funds the riotous American left & why? The globalist billionaire class, which uses it to build corporate socialism 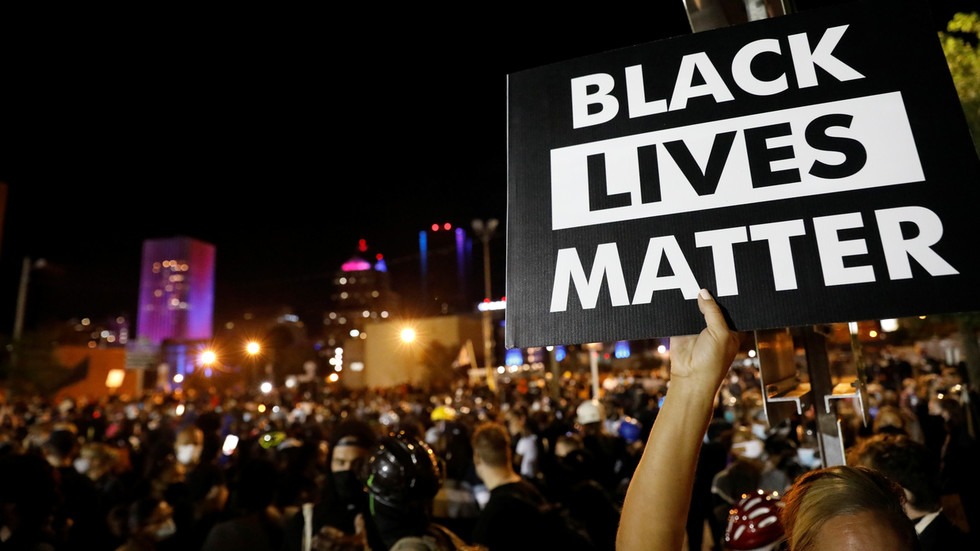 FILE PHOTO: A demonstrator holds up a “Black Lives Matter” sign during a protest over the death of a Black man, Daniel Prude, after police put a spit hood over his head during an arrest on March 23, in Rochester, New York, U.S. September 6, 2020 © REUTERS / Brendan McDermid

Michael Rectenwald is an author of ten books, including the most recent, Beyond Woke. He was Professor of Liberal Arts at NYU from 2008 through 2019.

Why do giant corporations and billionaires fund Black Lives Matter and Antifa, both avowed socialist groups? And why do the leftists accept their aid? They both want a kind of socialism, but only one of them could get their way.

If you’re at all familiar with the corporate and billionaire funding sources behind Black Lives Matter and Antifa and the socialist commitments of these groups and their leaders, you’ve probably wondered why the ‘capitalist class’ would support a movement whose doctrine is apparently antithetical to their own interests. Aren’t these funders capitalists after all, and don’t capitalists naturally oppose socialism?

And why do American leftists dance like marionettes attached to strings pulled by globalist billionaires? Don’t they understand that they’re actually serving the masters they claim to oppose?

The answer is not so simple as the World Socialist Website suggests: “The aims of the Black Lives Matter movement are aligned with those of Wall Street and the US government.” Nor is the answer that BLM/Antifa have merely ‘sold out’ to capitalists. Nor is the donor class making a mistake, or merely interested in racial equality. The answer is that the corporate and billionaire elites prefer a kind of socialism – namely, ‘corporate socialism’.

And what is corporate socialism? Corporate socialism is not merely government bailouts for corporations. It is a two-tiered system of ‘actually-existing socialism’ on the ground, paralleled by a set of corporate monopolies on top. (‘Actually-existing socialism’ is a pejorative term used mostly by dissidents in socialist countries to refer to what life was really like under socialism, rather than in the perfidious books of Marx and his epigones.)

Wealth for the few, ‘economic equality’ under reduced conditions for the many – corporate socialism is a form of neo-feudalism.

In Wall Street and FDR, historian Anthony C Sutton described corporate socialism, as developed in the 19thth century, and distinguished it from state socialism, as follows: “[The] robber baron schema is also, under different labels, the socialist plan. The difference between a corporate state monopoly and a socialist state monopoly is essentially only the identity of the group controlling the power structure. The essence of socialism is monopoly control by the state using hired planners and academic sponges. On the other hand, Rockefeller, Morgan, and their corporate friends aimed to acquire and control their monopoly and to maximize its profits through influence in the state political apparatus; this, while it still needs hired planners and academic sponges, is a discreet and far more subtle process than outright state ownership under socialism…We call this phenomenon of corporate legal monopoly – market control acquired by using political influence – by the name of corporate socialism.”

To ensure and appreciate profits to the fullest, corporate socialists seek to eliminate competition and the free market. As Sutton wrote, for the 19th-century corporate socialists: “The only sure road to the acquisition of massive wealth was monopoly: drive out your competitors, reduce competition, eliminate laissez-faire, and above all get state protection for your industry through compliant politicians and government regulation.”

And both systems use socialist-communist ideology – or the recent incarnations, ‘social justice’ or ‘woke’ ideology – to advance their agendas. For corporate socialists, corporate monopoly is the desired end and socialist ideology is among the means.

Socialist ideology works to the benefit of corporate socialists because it demonizes competition and the free market in an effort to eliminate them. This explains why capitalist corporations like Amazon and mega-wealthy capitalist donors like George Soros and Tom Steyer actually fund organizations with explicitly socialist agendas, like Black Lives Matter, and why Google, YouTube, Facebook, Twitter, and other internet giants apparently favor leftist and even socialist over ‘rightwing’ content and users.

Corporate socialism, the coronavirus lockdowns, and the riots

We can see the corporate socialist plan in action with the Covid-19 lockdowns and the Black Lives Matter/Antifa riots. The draconian lockdown measures employed by Democratic governors and mayors and the destruction perpetrated by the rioters are doing the work that corporate socialists want done. Is it any wonder that corporate elites favor leftist politics? In addition to destabilizing the nation state, leftist politics are helping to destroy small businesses, thus eliminating competitors.

As the Foundation for Economic Education (FEE) points out, the lockdowns and riots have combined to level a one-two punch that is knocking out millions of small businesses – “the backbone of the American economy”– all across America. FEE reported that “…7.5 million small businesses in America are at risk of closing their doors for good. A more recent survey showed that even with federal loans, close to half of all small business owners say they’ll have to shut down for good. The toll has already been severe. In New York alone, stay-at-home orders have forced the permanent closure of more than 100,000 small businesses.”

Moreover, minority-owned businesses are the most at-risk. Even New York Governor Andrew Cuomo agrees: “They are 90 percent of New York’s businesses and they’re facing the toughest challenges.”

As small businesses have been crushed by the combination of draconian lockdowns and riotous lunacy, corporate giants like Amazon have thrived like never before. The two developments ‘just so happen’ to move us closer to corporate-run socialism.

As BBC News noted, at least three of the tech giants – Amazon, Apple, and Facebook – have appreciated massive gains during the lockdowns, gains which were no doubt abetted by riots that cost one to two billion in property damages. During the three months ending with June, Amazon’s “quarterly profit of $5.2bn (£4bn) was the biggest since the company’s start in 1994 and came despite heavy spending on protective gear and other measures due to the virus.”

Amazon’s sales rose by 40 percent in the three months ending in June. As reported by TechCrunch, Facebook and its WhatsApp and Instagram platforms saw a 15 percent rise in users, which brought revenues to a grand total of $17.74 billion in the first quarter.

Facebook’s total users climbed to three billion internet users in March, or two-thirds of the world’s internet users, a record. Apple’s revenues soared during the same period, with quarterly earnings rising 11 percent year-on-year to $59.7 billion. “Walmart, the country’s largest grocer, said profits rose four percent, to $3.99 billion,” during the first quarter of 2020, as reported by the Washington Post.

These same corporations are also major supporters of Black Lives Matter and affiliated groups. As CNET reported, “Google has committed $12 million, while both Facebook and Amazon are donating $10 million to various groups that fight against racial injustice. Apple is pledging a whopping $100 million for a new Racial Equity and Justice Initiative that will ‘challenge the systemic barriers to opportunity and dignity that exist for communities of color, and particularly for the black community’ according to Apple CEO Tim Cook.”

Is it just a coincidence that the number of small businesses have been nearly cut in half by the Covid-19 lockdowns and the Black Lives Matter/Antifa riots, while the corporate giants have consolidated their grip on the economy, as well as their power over individual expression on the internet and beyond? Or, do the lockdowns and the riots prove that corporate socialism is afoot? And is “woke capitalism” merely a concerted PR campaign for appeasing activists and black people in order to curry favor and avoid cancel culture? Or, does woke capitalism actually express globalist, corporate socialist interests? What would a politics that serves such interests look like?

To benefit the globalist agenda of corporate socialists, those of monopolies or near monopolies, a political creed would likely promote the free movement of labor across national borders and thus would be internationalist rather than nationalist.

The global corporate monopolies or would-be monopolies would likely benefit from the creation of utterly new identity types for new niche markets, and thus would welcome and encourage gender pluralism, transgenderism and other identity morphisms. The disruption of stable gender identity categories erodes and contributes to the dismantling of the family, or the last bastion of influence between the masses and corporate power.

Ultimately, the global capitalist corporation would benefit from a singular globalized governmental monopoly with one set of laws, and thus would promote a borderless internationalism under a global government, preferably under their complete control, otherwise known as globalism. And the corporate socialists would benefit from the elimination of small businesses.

How does this line up with contemporary leftism? It has the same objectives. Leftism encourages unfettered immigration. It encourages gender pluralism and transgenderism and openly calls for the dissolution of the family. It seeks to destroy historical memory, inherited culture, Christianity, and the nation state. It aims at a one-world monopoly of government. And it despises small business and free enterprise.

Thus, leftist politics align perfectly with the globalist interests of monopolistic corporations. And corporate socialists are the beneficiaries of their ‘activism’.