There are reasons why President Trump was not prescribed HCQ for his bout with Covid.

Follow the money: Why hydroxychloroquine may have been denied to COVID-stricken Trump

There may be a financial reason Trump was not given hydroxychloroquine, an exceptionally effective, inexpensive treatment for covid.

by By Joel S. Hirschhorn 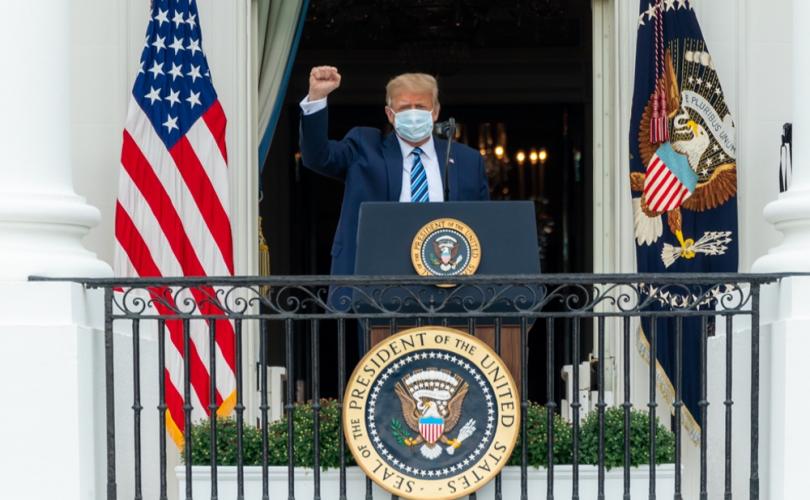 President Donald J. Trump address a gathering of peaceful protesters in support of law and order from the Blue Room Balcony on the South Lawn of the White House Saturday, October 10, 2020, in his first official event since recovering from the coronavirus. Shealah Craighead / White House Flickr

October 19, 2020 (LifeSiteNews) – Narcissist Dr. Anthony Fauci is terrorizing the public again with endless media appearances.  Rather than talk about medicines that can cure the coronavirus, like those given to President Trump, he is peddling fear by talking about 300,000 to 400,000 deaths.  He pushes his favorite solutions, namely masks and lockdowns.  Leftist media can’t get enough Fauci.  [Interestingly, he is the highest-paid federal employee with a salary of $417,608 versus $400,000 for the president.]

There is some mystery about why hospitalized President Trump was infused with the dubious, ultra-expensive medicine remdesivir and an experimental antibodies medicine.  Why not use hydroxychloroquine?  He previously took it safely and correctly promoted it.  Mountains of evidence have vindicated him.  HCQ has proven, better health benefits than remdesivir for treating the coronavirus.

Perhaps the ill disrupter president’s doctors were convinced to use remdesivir by establishment interests – namely a large drug company Gilead, the Gates foundation and Fauci – rather than HCQ, used safely by millions of people worldwide.

Many physicians strongly believe that an HCQ cocktail makes more public health sense.  Remdesivir can only be used for hospitalized patients.  But millions of people could take HCQ to stay out of hospital.  If President Trump had been given HCQ it would have promoted its wide use.  Oops, but that would threaten the billions of dollars to be made from remdesivir.  Such wide use of HCQ would negate the need for devastating lockdowns, a benefit not offered by remdesivir.

Though President Trump took HCQ as a prophylactic without any issues, he apparently did not stay on a weekly low dose together with zinc every day as many physicians believe necessary.  Conservative pundit Dennis Prager has been doing this for months.  “Rudy Giuliani says he is taking hydroxychloroquine despite testing negative twice for the coronavirus.”  The two people sitting on either side of him at the White House Garden Amy Coney Barrett announcement event tested positive for covid. Rudy was negative. Representative Louie Gohmert also announced his use of HCQ.  Brazilian President Bolsonaro proudly announced his successful use of HCQ.

Call it speculation, but perhaps one reason HCQ was not given to the president is a mostly unknown lawsuit in federal court against the federal government (FDA) by the Association of American Physicians & Surgeons.  The goal is to protect medical freedom and unblock physician access to HCQ by releasing the government stockpile that could save thousands of lives weekly.  It invokes “release of the HCQ Stockpile could save 50,000-100,000 American lives.”  This is forward-looking, but the same numbers apply to past death numbers: As much as half or more of the over 200,000 deaths were preventable! Maybe some senior advisors warned the president that using HCQ might lose the case.  Just maybe.

For months articles appeared highlighting the competition between HCQ and remdesivir to fight the pandemic.  But the competition was lopsided, like a kite competing against a jet plane.  Why?  So much money and powerful people pushing remdesivir.  So little money to be made from using HCQ.

What about the medical and scientific proof?  It is like night and day.  Remdesivir has only been shown to modestly reduce hospital time by a few days.  In contrast, HCQ in countless studies has been shown to cut hospitalizations and deaths.  When remdesivir was in clinical studies the government (Fauci) and Gilead cleverly changed what measured outcome effectiveness.  The protocol was changed after the trial started.  Rather than measure death, length of hospital stay, a far less rigorous measure, was deemed to determine success against COVID-19.  Why?  Because remdesivir did not reduce the death rate.  With billions of dollars at stake, they needed a way to make the drug a market success, despite a cost of thousands of dollars per patient.

Also, the government approved the drug even though phase three of the randomized clinical study had not been completed.  Note that Fauci blocked HCQ because of a lack of an acceptable randomized study.

Data on remdesvir just published shows it “had little effect in patients with moderate COVID-19 in 105 hospitals in the United States, Europe, and Asia in a randomized, controlled trial… adding to a mixed picture of the drug in randomized clinical trials (RCTs), which are considered the gold standard for gauging interventions.”  Similarly, a physician on an emergency medicine blog presented a detailed analysis and concluded “Combining all the evidence we have thus far, remdesivir is far from a savior in COVID-19.”

In a strange timing coincidence, the same day that news hit about Trump catching the virus The Washington Post had a major story with the headline “Remdesivir may not cure coronavirus, but it’s on track to make billions for Gilead.”  What first appears as a puff piece promoting remdesivir reveals on close reading a number of points that should shake up people.

Here are some examples:

As to granting standard of care recognition for remdesivir, it has been noted that the National Institutes of Health (NIH) panel had members with financial ties to the manufacturer, Gilead, and that the same panel ruled against HCQ as a standard of care.

Back in May, it was noted correctly that “there is no fair test of the two top contending treatments being conducted.”  Fauci was clearly seen as a promoter of remdesivir.  And, just as more work would show, this article correctly noted the serious side-effect, namely “abnormal liver function.”

Indeed, the European drugs regulator said recently that its safety committee was reviewing reports of acute kidney injury in some COVID-19 patients who had been given remdesivir.  A noted researcher concluded: “Remdesivir can cause severe kidney failure (requiring dialysis, kidney transplant), liver failure, genetic mutation, heart problems up to cardiac arrest, among others. This is the truth.”

Another source said we “strongly believe that Veklury (remdesivir) is a harmful drug and that this evidence has been concealed by Gilead.  We believe that the lobbying operation conducted in the media and certain public health authorities in order to discredit hydroxychloroquine, specifically in hospitals, was intended to make Velkury (remdesivir) the only solution in this situation.”

Trump will have to be checked for some time for side effects from remdesivir.

Also, there are no health concerns yet about the still experimental antibodies medicine from Regeneron also given to President Trump.

Recently, a noted physician said, “Remdesivir’s fight against Hydroxychloroquine (HCQ) is somewhat symbolic of the fight of medical journals, of corrupt institutions against field medicine, of the many general practitioners who are at the bedside.”

Letting physicians use HCQ use would greatly reduce dependence on a vaccine.  It is perfectly consistent with the Great Barrington Declaration, a highly praised strategy to curb lockdowns and open up society and the economy.

Important new positive results on HCQ merit attention.  Recently a California doctor received attention when he went public that he had successfully used an HCQ cocktail to cure over 1,700 people of the virus without any deaths.  That could be done safely for millions of Americans.  Doctor Tyson said that between 75 and 80 percent of the over 200,000 deaths thus far could have been prevented by using HCQ.  If the leftist media was not biased, that would be national news. That some doctors are using HCQ despite the hazards they face helps explain the lower death rate despite rising cases of the coronavirus.

A new report looked at five randomized controlled clinical trials enrolling 5,577 outpatients in the US, Canada and Spain; it found HCQ used for prophylaxis or early treatment was associated with a 24 percent reduction in COVID-19 infection, hospitalization or death without serious adverse events.  If zinc had also been used, more success would have been likely.  This is the latest of 133 studies of early treatment with HCQ, all positive with a median improvement of 64 percent.  Follow the science, not Fauci!  Give our doctors medical freedom to prescribe their patients what they believe most effective.

In sum, the president has been given three prescription medicines, including a new antibodies cocktail (from Regeneron) that the president has spoken about very positively [and which Fauci immediately downplayed], a traditional steroid as well as remdesivir that the president has not talked about.  But no HCQ.  One can only imagine the demand from ordinary Americans for such a powerful VIP treatment regime.  The president deserved a powerful approach, and it seems totally effective.  But the nonuse of HCQ merits discussion.

Dr. Hirschhorn has a Ph.D. in Materials Engineering. He has a long history of working on health issues, including being a full professor at the University of Wisconsin, Madison, a senior official at the Congressional Office of Technology Assessment and the National Governors Association.  He has authored a number of books and hundreds of articles and has served as an executive volunteer at a major hospital for over ten years.