Joe Biden was exposed as a hardcore, state-sponsored influence peddler.

After final debate, Biden’s campaign is left hanging on the ‘character’ of a high-stakes influence peddler 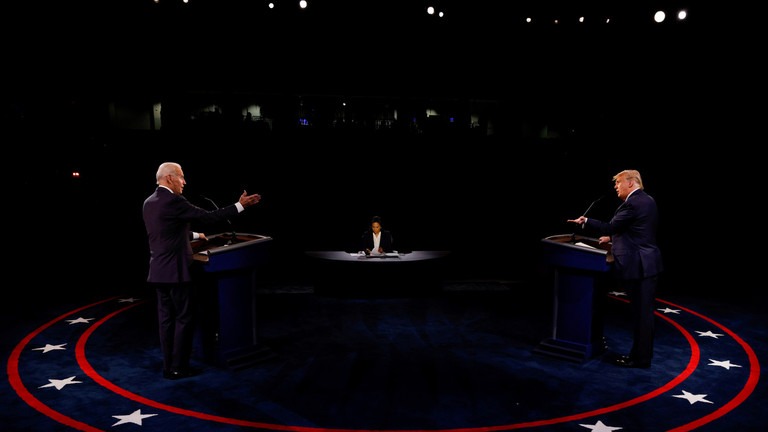 Michael Rectenwald is an author of ten books, including the most recent, Beyond Woke. He was Professor of Liberal Arts at NYU from 2008 through 2019.

Trump scored a decisive win in the final debate, as Biden, although lobbed softballs, teetered. The former VP rested his case on “character,” despite recent exposures of a global influence-peddling scheme undertaken in his name.

Trump scored a decisive win in the final debate, as Biden, although lobbed softballs, teetered. The former VP rested his case on “character,” despite recent exposures of a global influence-peddling scheme undertaken in his name.

In the second and last 2020 presidential debate, held at Belmont University in Nashville, Tennessee, Joe Biden and President Donald Trump answered questions about fighting Covid-19, American families, race in America, climate change, national security and leadership. As skewed as most topics were toward Democratic wheelhouses, Trump managed to do well in nearly all of the segments, securing what can only be seen as a victory, especially considering the odds against him.

Amid growing allegations about Biden’s involvement in an international graft scheme fronted by his son Hunter Biden, Trump nevertheless had long odds in a debate moderated by Kristen Welker, an ardent Democrat. Trump not only faced a political opponent, he also faced the narratives of a mainstream media that has been an unabashed accomplice intent on destroying his presidency for the last four years, and is now hell-bent on foiling his re-election bid. In the end, Trump managed to pull a rabbit out of his hat by posting a solid performance and shaking Biden with the allegations of corruption, while holding his own or outright winning on most topics.

On Covid-19, while Biden demagogued by pointing to 220,000 American deaths, Trump pointed to Biden’s handling of H1N1 (swine flu) and contrasted that with his own management of a pandemic that has affected most of the world. After the president said that “we’re learning to live with it,” Biden turned to the camera, addressing the American public, and said, “people are learning to die with it.” Trump pointed to the misery caused by lockdowns in Democratic-run cities and states, while claiming that Biden would lock down the country if one person among the massive bureaucracy recommended it. In all, on a topic cherry-picked by his opposition, Trump emerged unscathed and thus strengthened his standing.

For the second topic, national security, the questions revolved almost exclusively around “foreign interference” in US elections. It was at this point that Trump first invoked the brewing Biden scandal. The story of Hunter Biden’s laptop, emails and business contacts, and their connection to his father, has made the rounds on Trump-friendly media for many weeks. But the major media establishment has worked to memory-hole the story, or otherwise to ascribe the revelations to a “Russian misinformation campaign.” Yet, Trump managed to air Biden’s dirty laundry with frequent allusions to his family’s business deals in Ukraine, Russia, China and Iraq.

The topic of immigration worked to Trump’s favor as he repeatedly asked Biden, “who built the cages, Joe?” He was referring to the cages immigrant children were placed in at the border – that were built under the Obama-Biden administration – which were turned into a Democratic talking point against Trump’s policies on fighting illegal immigration. And the president won when he referred to the “catch and release” policy that kept criminal immigrants in American communities, until he abolished it.

The topic of race should have played to Biden’s strengths, given that Trump has been called a racist by the media and the Democratic Party since embarking on his 2016 presidential bid. But Trump pointed to Biden’s passing of the 1994 crime bill that led to the disproportionate imprisonment of blacks for drug use. Notably, Biden was forced to admit that the bill was a “mistake.” Trump then highlighted his own record on black and Hispanic employment, his development of “opportunity zones” and his investment in historically black colleges and universities. When Biden tried to underscore his superior “character,” Trump again raised the specter of Hunter Biden’s multiple international business deals and the former vice president’s alleged involvement in them.

Finally, when it came to climate change, Trump claimed there were record drops in CO2 emissions in the US under his administration and underscored the supposed $100 trillion cost of Biden’s energy plan. Neither is exactly true – emissions declined under Trump, but slower than before, and the $100 trillion cost refers to the Green New Deal from which Biden had sought to distance himself despite calling it a “crucial framework.” But Trump played well around these issues, turning the tables and forcing Biden to admit that his energy plan included the elimination of fossil fuels. Trump then appealed to voters in states like Ohio, Oklahoma, Pennsylvania and Texas, where workers rely on jobs in oil and natural gas. The veracity of climate change never surfaced.

In the end, Biden’s campaign and the Democratic platform, including the New Green Deal, now rest on his “character.” Biden’s last call to character was more than a little ironic in light of allegations regarding the apparent use of his office to enrich his family and himself, potentially at the expense of national interests and security.