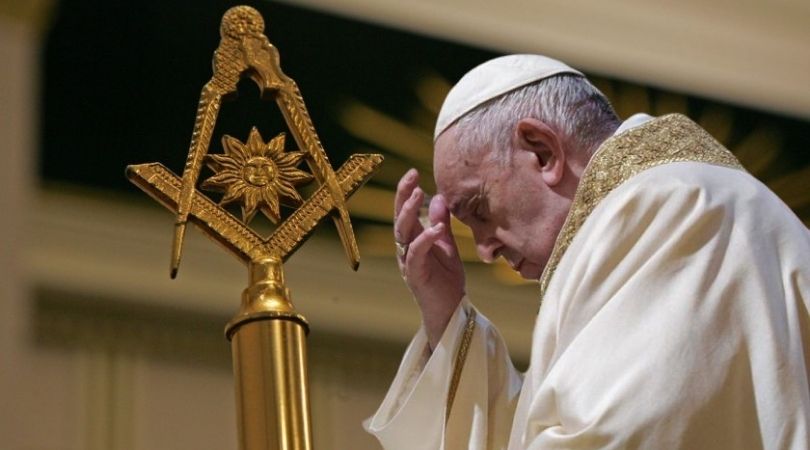 ROME (ChurchMilitant.com) – Italy’s biggest Masonic lodge is eulogizing Pope Francis’ encyclical Fratelli Tutti (All Brothers) as “close to the ideals that have constituted the very foundations of Freemasonry from the very beginning.”

Titled “A Masonic Value,” the cover article in the October issue of the Grand Orient lodge’s journal Erasmus extols the pope for expressing “apertis verbis” (in explicit words) a “key to universal fraternity” consistent with the doctrine of Freemasonry.

Fratelli Tutti has “many similarities with Masonic principles and vision,” Erasmus notes, explaining how “for over 300 years the principle of fraternity has been indelibly written in the Masonic triad placed … in the temples together with those of liberty and equality.”

“The realization of a universal brotherhood is from the origins of the great mission and the great dream of Freemasonry,” it underscores.

The commendation from Italy’s biggest lodge for the recent encyclical follows close on the heels of an endorsement from Spain’s main lodge, the Gran Logia de España, which claimed that the encyclical “demonstrates how far away the present Catholic Church is from its former positions.”

The faithful who enroll in Masonic associations are in a state of grave sin and may not receive Holy Communion.Tweet

Eight popes in the course of 200 years have issued 20 legal interdicts condemning Freemasonry and never have any of the pronouncements been revoked.

The Erasmus article cites the falsified version of St. Francis of Assisi’s visit to Sultan Malik al-Kamil in Egypt, which claims the saint visited the Sultan for dialogue, not evangelism.

The article gushes over the pontiff’s “openness to Islam,” observing that “Bergoglio in the encyclical does not hesitate to acknowledge that he felt inspired in a special way” by the grand imam of al-Azhar Ahmad Al-Tayyeb, with whom he signed his Human Fraternity document in Abu Dhabi in 2019.

Stressing the prerequisite of fraternity for the triad of liberty, equality and fraternity to function, the article labels it “the principles that Freemasonry has always pursued and preserved for the elevation of humanity.”

The lodge article goes on to praises the pope for identifying “the fanaticisms that also exist among Christians and in Catholic circles … lashing out against the death penalty and against life imprisonment, which he [Francis] defines as a ‘hidden death penalty.'”

In mid-October, Fr. Frank Unterhalt from the Paderborn diocese identified clear Masonic leitmotifs in the encyclical’s “tone of religious indifferentism and the call to universal fraternity.”

“The French Revolution is of particular importance in Masonic strategy,” Unterhalt wrote. “It is striking that Fratelli Tutti literally adopts its slogan when the headline of [paragraph] numbers 103 to 105 reads ‘Liberty, Equality and Fraternity.'”

“The striving for universal ecumenism of religions has always been a concern of Freemasonry on the way to its actual goal, namely to bring about the breakthrough of that self-constructed religion in which all human beings are supposedly in agreement,” the German priest pointed out.

Unterhalt notes that “the agenda that took shape in Abu Dhabi is, of course, not new, but the exact implementation of the Masonic ideology in Lessing’s drama Nathan the Wise, which is based on the lodges’ creed that truth and religion are relative.”

Gotthold Ephraim Lessing (1729–81) an influential Enlightenment philosopher and writer, painted in “the Parable of the Ring the picture of the supposed fraternal unity of the three so-called ‘Abrahamic religions,’ which in their historical conditionality were only of relative importance and interchangeable.”

Throughout history, the Catholic Church, through its Magisterium, has condemned any attempt towards “unity” with other sects or religions.

“Certainly, such attempts can nowise be approved by Catholics, founded as they are on that false opinion which considers all religions to be more or less good and praiseworthy,” Pope Pius XI declared in Mortalium Animos (1928), his encyclical against religious unity and the ecumenical movement.

Pope Leo XIII in Humanum Genus emphasizes that “the ultimate and principal aim” of Freemasonry “was to destroy to its very foundations any civil or religious order established throughout Christendom, and bring about in its place a new order founded on laws drawn out of the entrails of naturalism.”

In his bull In Eminenti Apostolatus (1738), Pope Clement XII condemned Freemasonry for its reliance on mere natural virtue while ignoring Christ’s unique role as Savior.

As prefect of the Congregation for the Doctrine of the Faith (CDF), Cdl. Joseph Ratzinger (later Pope Benedict XVI) categorically stated that “the Church’s negative judgment in regard to Masonic association remains unchanged since their principles have always been considered irreconcilable with the doctrine of the Church and therefore membership in them remains forbidden.”

The striving for universal ecumenism of religions has always been a concern of Freemasonry on the way to its actual goal.Tweet

“The faithful who enroll in Masonic associations are in a state of grave sin and may not receive Holy Communion,” the CDF statement declared.

In his book on Christian brotherhood, Die Christliche Brüderlichkeit, Ratzinger concludes that, according to the Bible, “only the limited application of the idea of brotherhood is Christian.”

According to the New Testament, brothers (and sisters) are those who belong in the unity of God’s chosen people. Believers only become brothers in virtue of their common participation in Christ’s sonship, Ratzinger stresses.