Is President Trump getting ready to take on the Neocons? 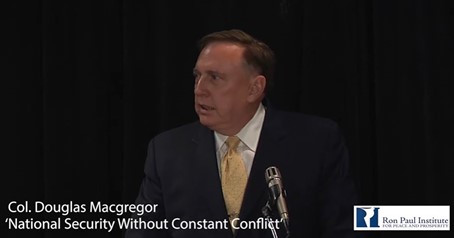 In what may go down in history as a tragic example of “a day late and a dollar short,” President Trump today named US combat veteran Col. Douglas Macgregor to be senior advisor to acting Defense Secretary Christopher Miller. Trump’s recently-fired Defense Secretary Mark Esper was another in a nearly four-year-long line of terrible personnel choices that together with the ongoing Democratic party-led slow-motion coup has crippled the Trump Administration in its most important mission: Putting America first when it comes to foreign policy.

Col. Macgregor is one of the most highly decorated US combat veterans, who unlike those officers with high political ambitions has actually smelled the stench of war. After blazing through Iraq in a tank in the first Gulf War, Col. Macgregor began to question the wisdom of a US global military empire that was emerging to take the place of the massive anti-Soviet machine that had sustained the mestastatic growth of the very military-industrial complex that President Eisenhower warned of in his farewell address.

There is a good argument that men of war are among the best allies in the fight against war, and Macgregor is no exception. His experience in the unwise application of massive US military force steeled him against those who would unleash those dogs too readily and with little consideration given to the actual interests of the United States.

As might be expected, Macgregor’s hesitation to sign on to the US global military empire made him public enemy number one to the Beltway neocons, who’ve never seen a war they don’t like but who have also never seen a day in military uniform. These are the wimps like Max Boot, who lob their scribbled missiles from the safety of their well-paid sinecures but who would need a change of skivvies at the slightest belch from an actual weapon.

One can only sit back and ponder what might have been, as we witness the culmination of nearly four years of a slow-motion coup against the duly-elected President of the United States, if President Trump had brought on board a full slate of men and women like Col. Doug Macgregor, who were living and breathing Trump’s campaign slogan of putting America first when it comes to foreign policy.

With perhaps weeks left in the Trump Administration (barring the miracle of actually counting valid votes), there is still a great deal that Trump and Macgregor can achieve. Bring troops home from Afghanistan now. Esper reportedly quit over that issue. Bring troops home from Syria. Defund NATO. Declassify all the “Russiagate” documents. Declassify everything that exposes the deep state coup against Trump.

Col. Macgregor is, full disclosure, a cherished friend of your author. He spoke at Dr. Paul’s Congressional Liberty Lunches and no doubt had great influence on Republican Members who were skeptical of endless war but also cautious over sounding too peacenik. Macgregor embodies the idea of a muscular defense of the United States that rejects the siren song of the neocons and globalists.

We are grateful that Col. Macgregor has spoken at two Ron Paul Institute conferences. Each time he outlined what would have been a highly successful Trump foreign policy. What an historic tragedy that Trump only paid attention to this far too late. Unless…