Just how much has CIA Director Gina Haspel conspired with the British Intel Community to take down Trump? 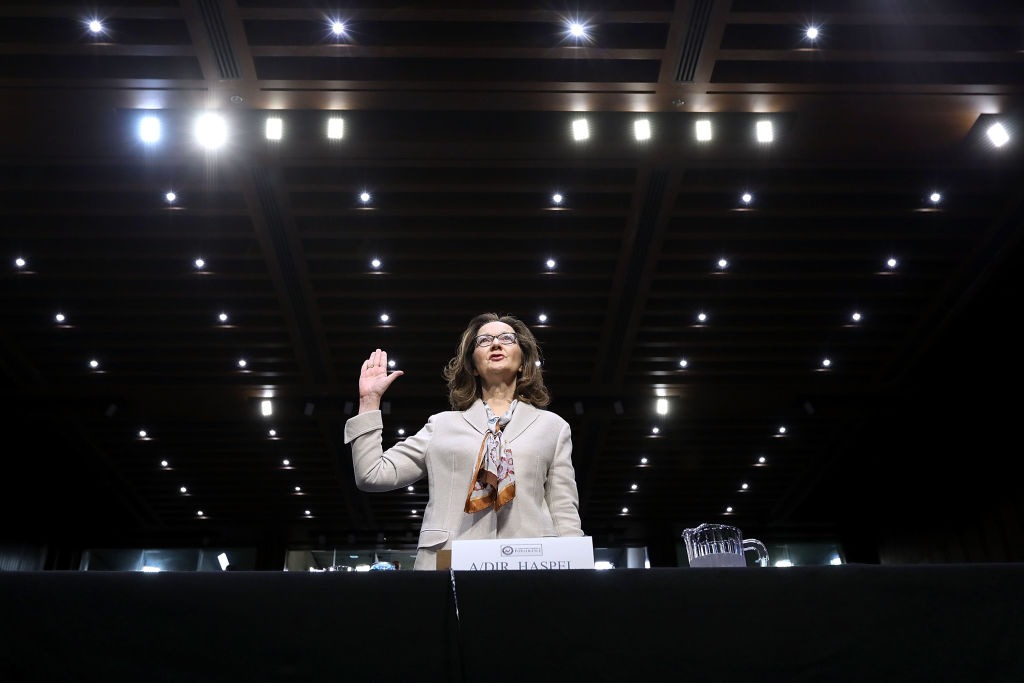 WASHINGTON, DC – MAY 09: Central Intelligence Agency Deputy Director Gina Haspel is sworn in before the Senate Intelligence Committee during her confirmation hearing to become the next CIA director in the Hart Senate Office Building May 9, 2018 in Washington, DC. If confirmed, Haspel would be the first woman to lead the nation’s biggest spy agency. Haspel ran a secret ‘black site’ CIA prison in Thailand after September 11, 2001, where detainees were subjected to brutal interrogation techniques and she was later involved in approving the destruction of videotapes of interrogation sessions at that prison. (Photo by Chip Somodevilla/Getty Images)

We have raised and discussed serious matters of fact and questions about the role of CIA Director Gina Haspel in the Anti-Trump conspiracy. It appears Haspel (while serving as London Chief of Station from 2014 to early 2017) was an active, knowledgeable party to the efforts to target candidate Trump with an FBI-instigated foreign counterintelligence operation. That seditious conspiracy carried forward to a more sophisticated and aggressive plan to carry out a soft coup against President Donald J. Trump.

Looking back on news reporting concerning Haspel, we turn (with caution) to a Washington Post article from July 2019 by Shane Harris, titled: “The quiet director: How Gina Haspel manages the CIA’s volatile relationship with Trump”. We are supposed to believe that Haspel and her office did not cooperate with the reporter for the article. Harris disclaims Haspel involvement by writing:

“This report is based on interviews with 26 current and former officials who have worked with Haspel in the United States, particularly when she served in senior management roles at headquarters, and in London, where Haspel served two tours as the CIA’s top representative — chief of station — a plum post that is usually the steppingstone to the agency’s highest ranks.”

No Washington Post article in the last decade has contained such a scrupulous sourcing statement. Of course, Haspel had nothing to do with the article. Remember that, won’t you?

Haspel, twice-over Chief of Station in London, had close connections with the British intelligence and security services. Given the nature of the “special relationship” between the two countries, that is hardly surprising. Harris’s interviews of British intelligence officers take things a step further, however:

“… what she lacked in after-hours sociability she made up for with deep professional ties to the upper echelon of the British security establishment. ‘She had access to anyone in our service,’ the former British intelligence official said.”

Harris goes on to explain:

“Haspel has become the CIA’s linchpin to the Secret Intelligence Service, or MI6, its most important foreign partner. Her British colleagues say that she knows them so well — warts and all — that they call her the ‘honorary U.K. desk officer.'”

In the next paragraph, Harris notes breathlessly:

“… Trump has accused the United Kingdom of conspiring with American intelligence to spy on his presidential campaign.”

President Trump certainly has made that claim, and one believes for very good reasons that seem to compound weekly. Reasons that make the “intelligence community” and 95% of “official Washington” extremely nervous. It is the sort of statement that presidential aides and counsels look nervous about, wring their hands and respectfully, earnestly plead: “But Mr. President, you just can’t say that sort of thing!” Truth be damned.

Concurrent with the FBI’s anti-Trump foreign counterintelligence operation, launched from the United Kingdom (with Haspel’s affirmative “coordination”), keep in mind that the UK’s version of the National Security Agency — the Government Communications Headquarters (GCHQ) — was engaged in an aggressive Signals Intelligence campaign later codified in UK law as the Investigatory Powers Act (and referred to colloquially as the “Snoopers’ Charter”). Having the British run an aggressive intelligence collection operation against Team Trump targets, bypassing US legal prohibitions, and then laundering the intelligence “take” back to US officials via the UK-US liaison relationship is precisely something an “honorary UK desk officer” might be good and adept at accomplishing.

Certainly, these subjects and questions deserve closer examination, without the phony prophylactic defense of grave warnings about “sources and methods.” No one examining the coup against President Trump is seriously interested in the precise technical collection techniques of GCHQ — they just want to know if the Brits were involved in an attempt to subvert a presidential campaign and then overturn the results of an election. CIA Director Gina Haspel can answer all of those questions, and she does not even have to touch upon classified information to do so. The American public is due her answers.

Chris Farrell is a former counterintelligence case officer. For the past 20 years, he has served as the Director of Investigations & Research for Judicial Watch. The views expressed are the author’s alone, and not necessarily those of Judicial Watch.