Well this is awfully odd … or is it? GOP won all 27 races considered a toss-up!

‘Experts’ listed 27 House races as toss-ups, but Republicans won all 27 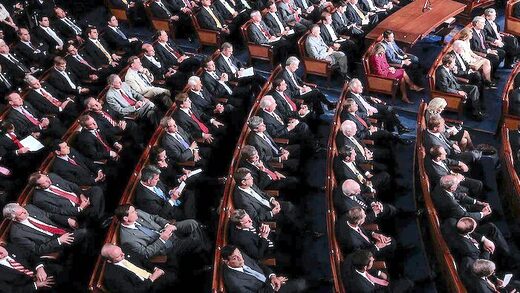 On Monday, Burgess Owens, a former NFL player and vocal critic of Colin Kaepernick, was declared the winner of Utah’s 4th Congressional District.

Despite running against an incumbent and trailing by 11% in final polling, Owens prevailed in a race deemed a “toss-up” by Cook Political Report, a “nonpartisan” election and campaign analysis group popular among legacy media outlets.

Ahead of the 2020 election, Cook listed 27 races as “toss-ups,” meaning they were too close to predict one way or the other. Republicans won all 27.

That’s not a typo. Despite being assured by that conservatism was about to drown beneath an impending “blue wave,” Republicans won every single close race.

Despite nearly unanimous predictions that Democrats would further cement control of the House, they now hold just a 218-204 advantage, with Republicans poised to pick up more seats, as they lead in 8 of the remaining 13 races.

Republican dominance in supposedly 50-50 districts is yet another reminder of just how wrong polls were in 2020, and how wrong they have been for some time. What should embarrass pollsters most, though, is not the fact that they were wrong, but how one-sided they were in the process.

Across the board, pollsters routinely underrepresented support for Republicans while falsely painting a picture of impending Democrat dominance. Are the American people supposed to think that it’s a coincidence that nearly every time a poll missed the mark in 2020 — which was often — it was in favor of Democrats?

How many state and federal races were impacted by incorrect polling that showed stronger support for Democrats than actually existed? Think of the donors who refrained from giving to a candidate because the polls indicated that the race was already over. How many candidates missed out on key endorsements or support from outside entities because they were viewed as a lost cause?

We’ll never know the answer to these questions, but what we do know is that pollsters will continue to mislead and misinform so long as they have a media willing to prop them up. It’s a cycle we’ve seen far too often: the leftist legacy media creates a narrative, then promotes polls which reinforce that narrative. When the polls turn out to be an inaccurate representation of reality — like in 2016, 2018 and 2020 — the media quickly moves on to the next news cycle, never taking responsibility or facing retribution for the error in their ways.

Will the American people ever wake up and demand more? Will they stop funding the legacy media which propagates the failed predictions of pollsters en masse? Right now, it’s hard to say. I guess you could call it a toss-up.