As devout Christians and faithful citizens of the United States of America, you have intense and heartfelt concern for the fate of your beloved country. 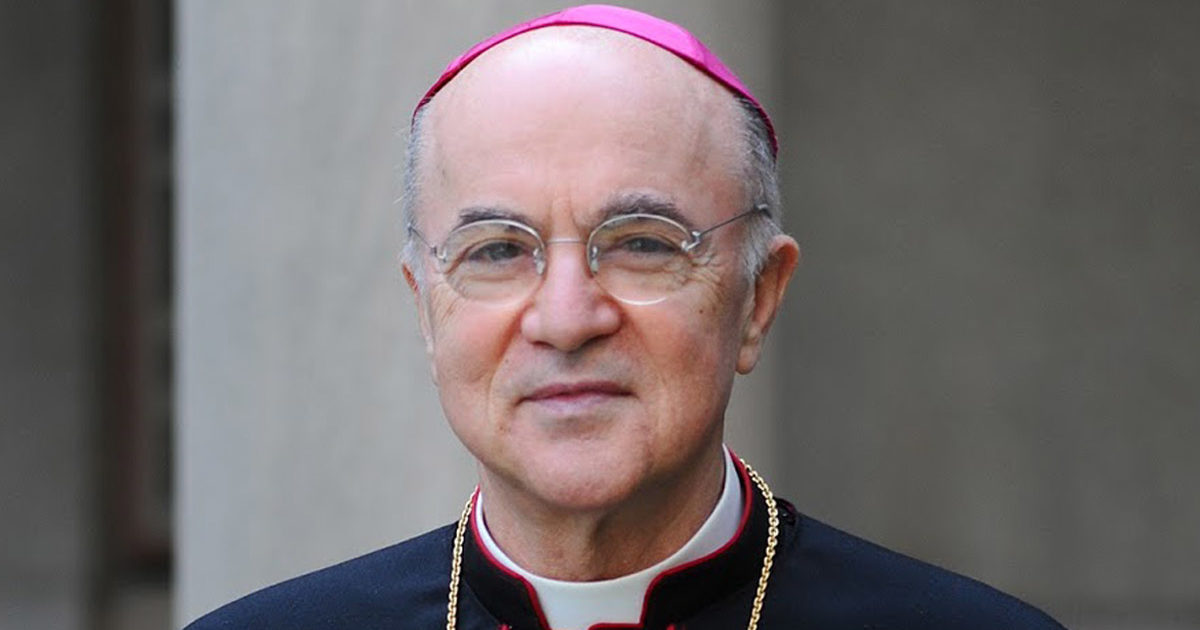 The following is a Nov. 4, 2020 message from Archbishop Carlo Maria Viganò addressed to “American Catholics and to all Americans of good will.”

As devout Christians and faithful citizens of the United States of America, you have intense and heartfelt concern for the fate of your beloved country while the final results of the Presidential election are still uncertain.

News of electoral fraud is multiplying, despite the shameful attempts of the mainstream media to censor the truth of the facts in order to give their candidate the advantage. There are states in which the number of votes is greater than the number of voters; others in which the mail-in vote seems to be exclusively in favor of Joe Biden; others in which the counting of ballots has been suspended for no reason or where sensational tampering has been discovered: always and only against President Donald J. Trump, always and only in favor of Biden.

In truth, for months now we have been witnessing a continuous trickle of staggered news, of manipulated or censored information, of crimes that have been silenced or covered up in the face of striking evidence and irrefutable testimony. We have seen the deep state organize itself, well in advance, to carry out the most colossal electoral fraud in history, in order to ensure the defeat of the man who has strenuously opposed the establishment of the New World Order that is wanted by the children of darkness. In this battle, you have not failed, as is your sacred duty, to make your own contribution by taking the side of the Good. Others, enslaved by vices or blinded by infernal hatred against Our Lord, have taken the side of Evil.

Do not think that the children of darkness act with honesty, and do not be scandalized if they operate with deception. Do you perhaps believe that Satan’s followers are honest, sincere, and loyal? The Lord has warned us against the Devil: “He was a murderer from the beginning and does not stand in truth, because there is no truth in him. When he tells a lie, he speaks in character, because he is a liar and the father of lies” (Jn 8:44).

In these hours, while the gates of Hell seem to prevail, allow me to address myself to you with an appeal, which I trust that you will respond to promptly and with generosity. I ask you to make an act of trust in God, an act of humility and filial devotion to The Lord of Armies. I ask that all of you pray the Holy Rosary, if possible in your families or with your dear ones, your friends, your brothers and sisters, your colleagues, your fellow soldiers. Pray with the abandonment of children who know how to have recourse to their Most Holy Mother to ask her to intercede before the throne of the Divine Majesty. Pray with a sincere soul, with a pure heart, in the certainty of being heard and answered. Ask her – she who is the Help of Christians, Auxilium Christianorum – to defeat the forces of the Enemy; ask her – she who is terrible as an army set in battle array (Song 6:10) – to grant the victory to the forces of Good and to inflict a humiliating defeat on the forces of Evil.

Have your children pray, using the holy words that you have taught them: those confident prayers will rise to God and will not remain unheard. Have the elderly and sick pray, so that they may offer their sufferings in union with the sufferings that Our Lord suffered on the Cross when he shed His Precious Blood for Our Redemption. Have young ladies and women pray, so that they turn to her who is the model of purity and motherhood. And you, men, must also pray: your courage, your honor and your boldness will be refreshed and strengthened. All of you, take up this spiritual weapon, before which Satan and his minions retreat furiously, because they fear the Most Holy Virgin, she who is Almighty by Grace, even more than Almighty God.

Do not allow yourselves to be discouraged by the deceptions of the Enemy, even more so in this terrible hour in which the impudence of lying and fraud dares to challenge Heaven. Our adversaries’ hours are numbered if you will pray, if we will all pray with Faith and with the true ardor of Charity. May the Lord grant that one single devout and faithful voice rise from your homes, your churches, and your streets! This voice will not remain unheard, because it will be the voice of a people that cries out, in the moment when the storm rages most fiercely, “Save us, Lord, we are perishing!” (Mt 8:25).

The days that await us are a precious occasion for all of you, and for those who unite themselves spiritually to you from every part of the world. You have the honor and privilege of being able to participate in the victory of this spiritual battle, to wield the powerful weapon of the Holy Rosary as our fathers did at Lepanto to repel the enemy armies.

Pray with the certainty of Our Lord’s promise: “Ask and it shall be given unto you, seek and you shall find, knock and the door shall be opened unto you” (Lk 11:9). The King of Kings, from whom you ask the salvation of your Nation, will reward your Faith. Your testimony, remember this, will touch the heart of Our Lord, multiplying the heavenly Graces which are, more than ever, indispensable in order to achieve victory.

May my appeal, which I address to you and to all people who recognize the Lordship of God, find you to be generous apostles and courageous witnesses of the spiritual rebirth of your beloved country, and with it the entire world. Non praevalebunt.

God bless and protect the United States of America!

One Nation under God