This little act shows that even Joe Biden knows he got crushed on Election Day! 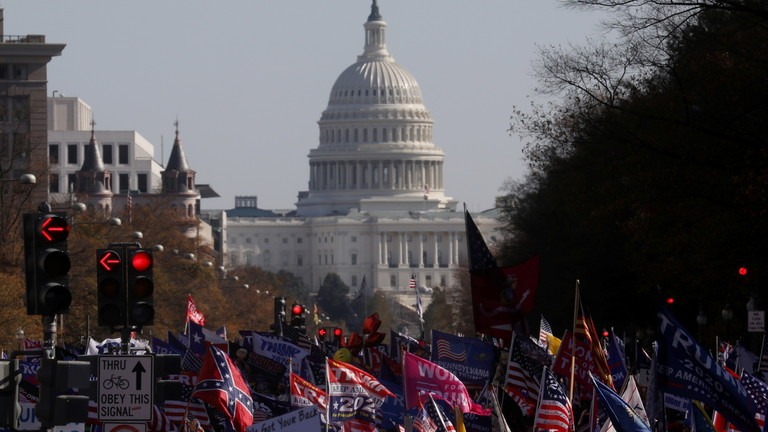 Rumors of ‘pardon’ for Trump come after the ‘Million MAGA March’ in support of the current president on November 14, 2020. © REUTERS/Leah Millis

Nebojsa Malic is a Serbian-American journalist, blogger and translator, who wrote a regular column for Antiwar.com from 2000 to 2015, and is now senior writer at RT.

Using NBC News as a conduit, Democrats are trying to persuade President Donald Trump and his supporters to surrender and maybe expect mercy. Barack Obama’s name-dropping of Genghis Khan offers a clue of what that might look like.

Citing five anonymous sources “familiar with the discussions” in the camp of Joe Biden, the media-anointed president-elect, NBC reported on Tuesday that he doesn’t want his presidency to be “consumed by investigations” of Trump.

“Biden has raised concerns that investigations would further divide a country he is trying to unite and risk making every day of his presidency about Trump,” according to the anonymous officials.

The Democrats just spent four years investigating Trump for phantom ‘Russian collusion,’ had the FBI spy on his campaign using the fabricated ‘Steele Dossier,’ and even impeached him over a phone call to Ukraine that mentioned something Biden publicly boasted about doing. If you believe they are going to drop this vindictive streak for the sake of “unity” now, you sound like someone who might be interested in helping a humble Nigerian prince share his wealth. So what gives?

Parallel to the “news” story – signed by the second presidential debate moderator Kristen Welker, by the way – NBC also ran a “hot take” think piece by a Democrat lawyer Michael Conway, making the exact same argument. Biden should pardon Trump, Conway argued, for the sake of peace and unity.

Keep in mind that Trump has not conceded the election and is trying to dispute the results in several states through litigation, while the mainstream media insist Biden won and social media platforms are suppressing any suggestions otherwise as “disputed” or “misinformation.”  Meanwhile, tens of thousands of Trump supporters rallied across America last weekend in what they called a ‘Million MAGA March’ to protest the “stolen” election.

The admission that some 73+ million Trump voters might get angry if Biden goes after him is buried midway through Conway’s argument, between reminders that state and local prosecutors can still prosecute Trump and that a pardon would mean an admission of guilt. Go back to the piece co-authored by Welker and sure enough, the same exact reasoning is there as well – all the way at the end and attributed to Biden himself.

Of course, there’s a stick behind the implied carrot, as one of the unnamed NBC sources made sure to note that the Biden DOJ will “look into” the actions of Trump officials between now and the inauguration should they not capitulate.

“While they’re not looking for broad criminal indictments, they do want to make sure that people don’t think there are no ramifications for any of their actions between now and the new presidency,” the person supposedly told NBC.

Judging by the vitriol that Conway’s proposal was met with online, it’s not difficult to guess that the Democrat base is vehemently opposed to any notion of clemency for Trump or his supporters. However, if there is one thing we’ve learned about the Democrats during this election cycle is that they always fall in line and do what they’re told. Recall the frightening speed with which the entire field of primary candidates bent the knee this spring, once the party decided Biden would be the nominee.

As for what the purported mercy towards Trump and his supporters might look like, however, the Republicans would be wise to heed the words of Biden’s former boss. A day before the dual NBC stories, former President Barack Obama opened his interview with his Atlantic sycophant Jeffrey Goldberg by admiring Genghis Khan’s policy of “mercy” for the conquered.

“If you open the gates, we’ll just kill you quickly and take your women and enslave your children, but we won’t slaughter them. But if you hold out, then we’ll slowly boil you in oil and peel off your skin,” Obama quoted to Golberg, in what the Atlantic editor interpreted as an indirect comment on the Trump presidency.

“In any case, Obama has more respect for Genghis Khan than he has for Donald Trump,” Goldberg opined.

Could it be because for all of his tweets supposedly “directing” DOJ to prosecute political opponents, Trump never actually did? Quick, how many Obama-Biden administration people went to jail, or even suffered any sort of consequences, for manufacturing the ‘Russiagate’ scandal, spying on Trump’s campaign using the fabricated ‘Steele Dossier’ or doctoring evidence to railroad his aides?

If you answered none, you’d be wrong – but only technically. The sole person sentenced, a FBI lawyer who altered evidence to clear the way for the FISA warrant to spy on Trump’s campaign, pleaded guilty to a lesser charge and faces lesser punishment than any of the Trump aides caught up in Robert Mueller’s witch hunt. The others made millions from book deals or got cushy cable pundit jobs.

There’s a lesson in there somewhere, but only for people willing to learn.