For anyone who really wants to know what’s going on in Iran right now, just read the comment section at this ZeroHedge.com article: https://www.zerohedge.com/geopolitical/you-killed-our-geniuses-regime-crackdown-intensifies-iranians-flood-streets-third-day

The most truthful and insightful comments that call out the current fake Iranian protests as a classic CIA-MI6-MOSSAD regime change operation were actually posted in serious protest by Zero Hedge’s readership to that naked propaganda piece.  The ZH article actually refers to a REUTER’s propaganda piece that extols the virtues of all the fake protesters the C.I.A. paid to show up in Tehran USING YOUR TAX DOLLARS.  Wow!

First question: how did ZeroHedge.com go from being one of the edgiest Alt Media websites on the Internet, to becoming a prolific purveyor or propaganda and prevarication?

It’s as if the Zero Hedge site was actually set up from the very beginning to slowly, yet stealthily, corral its readers into the camp of political correctness regarding all things having to do with Israel.

With each passing week, the typical edgy ZH articles are interspersed with Neocon-contrived content that is suspiciously in favor of the Neocon warmongering agenda or Zionist plan for Mideast domination or key element of the Greater Israel project.

Now how did that happen, except with highly purposeful design?!

Now, here’s how they do it.

And this “Typical Zionist Media-Control Scheme” almost always works like a charm.

First, they find an Internet content innovator and/or producer.

They vet him or her or them so that they know their obvious character flaws and major points of vulnerability and other weak points that can be pressed when the time is right.

Only in these cases, they not only need money to start the new media operation, they also need money desperately to cover other serious expenses.

Those expenses could vary from a crack cocaine habit to a crystal meth addiction, from a black heroin dependence to a marijuana craving.  The crushing monthly cost could also be an alimony payment under threat of imprisonment, or a loan shark IOU or a gambling debt with the mob.  The [TARGETED] individual could also be saddled with massive medical bills or an upcoming medical procedure for a life-threatening disease for themselves or a loved one.  Maybe they just lost their job … or their house … or their spouse.

Obviously, the preceding list is endless.  The key point is that the controllers identify what the individual desperately needs by way of finances.  Then, the perps exploit that need to the max when the time arrives for the targeted individual to be dictated to.

But, first, the controllers completely capitalize or fund a critical part of the ICI’s new Internet-based alternative news platform to get them established on the World Wide Web.  After all, it’s wasn’t memed the World Wide Web for nothing, yes?

The controllers might pay for everything in sight necessary to get the site going and growing fast.  Or, they might just financed the most vital start-up costs to incarcerate the ICI into a prison of loans and other type of debt.  These same perps have total control over things like SEO and other site placement techniques on the Internet, so the process of building a big audience can occur practically overnight.

Next, the unsuspecting ICI is encouraged (or forced) to work their tail off filling their platform with original content in a way that, perhaps, only they and their small group can do.  Then, when the perfect time comes like it just did with the assassination of Iranian General Qasem Soleimani, the website is sent pure propaganda pieces that are then shoved down the throats of their highly disillusioned readers.

However, that was then.

But that’s really how the Neocon Zionist media mavens have always gotten away with this crafty takeover scheme … … … until 2020.

SOTN Editor’s Note: If there’s one thing that has really shocked the SOTN editors, writers, researchers and associated content producers since the election of Donald Trump, it’s the sheer number of supposedly Alt Media new platforms that have completely left the reservation of truthfulness and patriotism.  Of course, transparent psyops and cunning media operations such as Q (also known as QAnon), as well as others like Serial Brain 2, did a LOT of damage to the worldwide Truth Movement.  In the process, many Alt Media platforms got completely taken over or co-opted by those Neocon black operations, many not even knowing what happened to them.

There’s much more that can be written about the countless Zionist-run media black ops being conducted across the World Wide Web at this very moment, but you get the picture (see below screenshot). 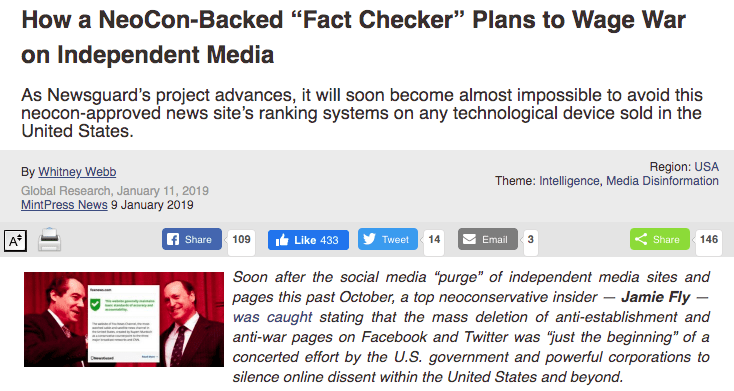 Almost the entire Right side of the Alt Media, and we don’t just mean the Alt Right, has been totally taken over by Neocon Zionist propaganda and prevarication (see the above photo). That slow-motion epidemic of “propaganda and prevarication” is now so entrenched it really can’t be fixed.  Hence, the world is now ready for the next generation of solitary truth-tellers who just run their platforms in a small way—not like ZeroHedge.com.

KEY POINT: NeoCON Zionist Donald Trump, also known as Don the Con, is the de facto leader, spearhead and torchbearer of this utterly fake media movement designed to stampede America’s youth into yet another war for Israel.  As far as the many LOST Alt Media sites are now concerned, Trump can do no wrong in the very same way Adolf Hitler could no wrong in Nazi Germany pre-World War II.

How, pray tell, could Zero Hedge still be permitted to run those Google ads next to some of the most radioactive content on the Internet, unless there was a catch.

Well, there is a catch—a HUGE catch, and it goes like this.

A mammoth news site like Zero Hedge is allowed to run with just about any content they so desire as long as they push the Neocon Zionist agenda when ordered to.  And, those ZH editors know that if they fail to honor the secret agreements put in place since the very beginning, they do so on pain of ….

KEY POINT: Here’s another article just posted at Zero Hedge today authored by The Gatestone Institute—a far-right Neocon think tank whose previous chairman was none other than Neocon Zionist and Israel Firster John Bolton: https://www.zerohedge.com/geopolitical/turkey-muscles-israel-greece-cyprus-eastmed-gas-pipeline-deal.  ZH has been reposting more propaganda pieces by Gatestone lately which makes no sense whatsoever unless they have been forced to or paid handsomely to.

This is how it’s always done.  Some of these websites can post the most foul or ridiculous or radioactive content imaginable as long as they support all things having to do with Israel, Zionism, Neocon warmongering, etc.   See how they co-opted the whole place?!

One last crucial factoid: one of the biggest Alt Right sites on the net today — Breitbart.com was founded by Israel-controlled conservative Andrew Breitbart.   This is why BREITBART aggressively promotes all things positive toward Israel.  It should be noted that Breitbart is a feeder site for many other Alt Right websites.  Get the picture: 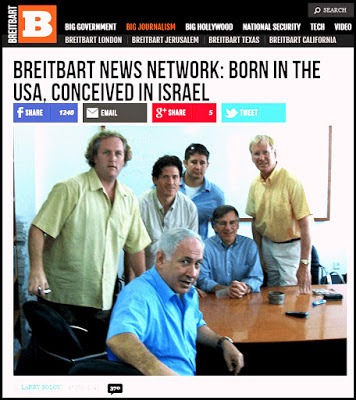 This article was supposed to be about the “CIA, MI6, MOSSAD Running Massive Regime Change Psyop in Iran”.  And it is, but it also explains an extremely important element regarding critical media control exerted by the all-powerful Western Intel Community.

You see, the Zio-Anglo-American Axis can only get away with this type of regime change when the mainstream media marches in lockstep with all their utterly fake news about the targeted “regime and militants” … and when the Alt Media is sufficiently suppressed and/or totally controlled.  Because of the potential virality of radioactive “memes and messages”, once the truth leaks out from a truth-telling Alt Media site, there’s no putting the genie back in the bottle.  And, such hard news releases can really throw a wrench into the CIA black ops.  After all, surprise and secrecy are the very backbone of their covert operations necessary to pull off a color revolution.

This kind of unwanted media exposure for the C.I.A. has already happened on numerous occasions.  In light of the many spy agencies and secret services that regularly read websites like SOTN and others (e.g. The Saker and Moon of Alabama), they’re sometimes being clued into the well-hidden back stories while CIA psyops and conspiracies are actually still in progress.  So while the Internet has given the dark side another way to pollute cyber-space with disinformation, misinformation, false information, there are also truth portals that nations-states can now access which augment the information/data acquired by their own intelligence-gathering apparatus.

The bottom line here is that the whole media game has changed irreversibly.  The Powers That Be unwittingly created a new media space whereby a little website like SOTN can start each and every day releasing hundreds of flaming arrows into the Deep State castle.  And, there really is nothing the controllers can do about it because setting up a new Alt Media website or YouTube channel or Twitter account or Facebook page or Instagram account takes but a few minutes.

KEY POINT: For instance, it was this platform that started the meme: “Epstein didn’t kill himself”.  Now that’s a gamechanger. See: The Lynchpin MEME That Will Take Down the Shadow Government

Lastly, it’s important to note that the protests in Iran are a total flop because some in the Alt Media space have informed patriotic Iranians via various exposés that only CIA-paid traitors ever show up for these ridiculously fake protests.  Who but seditious Mossad agents and CIA contractors would ever show up at the Tehran city square and risk death.  Hence, whenever people are killed and injured by the government (often by strategically positioned Mossad snipers), it’s the CIA-MI6-MOSSAD cabal who ought to be blamed, since they are the real provocateurs and/or perpetrators.  When aggressive action is necessary, the Iranian government is only responding to those black ops in a manner that ensures protection of the citizenry and guarantees national sovereignty.