The Great Game Continues in the Shia Crescent

Ed.’s note: Confused about what is going on in Iraq, Iran and the Middle East? Of course it is confusing and is meant to be confusing because it is all part of the “great game.” That “great game” also includes Israel providing technology and know how to China to assist China in building the technological infrastructure for China’s B&RI. Resistance in Iran is going to have to be broken and once Iran is destabilized then collapsed, Iran will more than likely take over the stan countries. It is also very likely Iran and Israel at the highest levels coordinate for this strategic plan while simultaneously building their military capacity. It is also probably accurate to say Russia is also working very closely with Iran to coordinate this strategy for China’s B&RI. While the Pentagon looks to be developing tactical strategies to prevent this from happening that might explain why the US will continue to occupy Iraq.
BREAKING: IRAQI INSURGENTS BOMB U.S BASE – CASUALTIES REPORTED

Iran’s President Hassan Rouhani attended Glasgow Caledonian University in Scotland, graduating in 1995 with an M.Phil. degree in Law. Rouhani is close to Jack Straw and Straw is very close to Lord Levy. And Lord Levy is very close to Lord Rothschild. Jack Straw says “in Hassan Rouhani’s Iran, you can feel the winds change.” “Winds changing” is an understatement. They are gust winds blowing at high velocity directly from the City of London and from Israel’s direction. All very high level British intrigue going on here in Iran. It was Jack Straw who appointed Daniel Bethlehem who developed the “Bethlehem Doctrine” used in justifying the assassination of General Soleinami under false pretenses Pompeo probably knew about when he informed President Trump. From 1979 to 2013, Rouhani held a number of important positions in the Velayat-e Faqih‘s key institutions, as “the man in power but in the shadows.” Hassan Rouhani’s job it appears considering his education and position is through Shia law to continue to perpetuate the spread of the “revolution.” The “revolution” is designed to keep confrontation in place. Why not gradually move from “revolutionary Shia” to a more conciliatory peaceful religious position? Iran’s Mohammad Javad Zarif who is now an Iranian career diplomat, spent 20 years from the age of 17 studying in the United States. Kind of makes us look harder at John Kerry and whether or not his connections to Mohammad Javad Zarif have anything to do with all that is unfolding here?Mike Pompeo accuses John Kerry of ‘actively undermining’ U.S. with Iran meetingsJohn and Javad, the Odd Couple Who Struck the Iran DealLies, the Bethlehem Doctrine, and the Illegal Murder of SoleimaniThis is what Iran should be: a happy, prosperous, hard working and loving people. Instead, Iranians are kept in a state of perpetual religious Shia law enslavement that Iranians with western intelligence connections have like Hassan Rouhani who inculcates fear which leads to animosity and hatred. Note that this lovely young Iranian woman is not wearing a hijab. See the consequences? A people living in constant primitive religious fear need weapons and related hardware to protect them from all the other nasties in the world who want to harm them.

The US has now denied Javad Zariff a visa to enter the US in order for Zariff to get to the UN at the direction of the US Secretary of State Mike Pompeo. Mohammad Javad Zarif was likely going to go to the UN to announce “there would be no more talks about prisoner exchanges with the US following the killing of Maj. Gen. Qassem Soleimani.” Then when you consider Mike Pompeo and some US congressional members, their real capacity for understanding what is going on here comes into serious question. GOP Rep. Paul Gosar of Arizona tweeted a fake photo of former President Barack Obama and Iranian President Hassan Rouhani that appears to show the two men smiling and shaking hands. Do these American politicians comprehend what is happening here? Rep. Paul Gosar obviously doesn’t. What is Iran and its President Hassan Rouhani’s final decision? To kick all US forces out of the region. That is precisely what China, Russia, Israel and Iran would like nothing better to happen now that America being dragged into wars in the region for the past 23 years has destroyed entire swaths of infrastructure and has killed untold numbers of civilians tarnishing Americans forever. Americans are still getting killed in Afghanistan. What for? Think there are people in the Pentagon who want to reestablish “American exceptionalism” in the region? Would anyone care to guess where the trillion$ of dollars went to flowing through the Pentagon?

Trillions of Dollars in U.S. Military Spending Are Unaccounted-For

And they all have their Swiss bank accounts including Rouhani so we can see this is all being coordinated at the very highest levels between all these countries. What has to be figured out is who is aligning with who in all this? These people are all connected to the Rothschild’s private intelligence networks with Russia’s Vladimir Putin and America’s President Trump completely surrounded (Israel firster Zionist billionaires) by these private intelligence networks to perpetuate war (Iran continues to purchase billions in Russian military hardware), profits and destabilization to build Rothschild’s new NWO model for the world: China. The Pentagon would like nothing better than for Iran to obtain as much weaponry as it possibly can. With Lockheed Martin operating out of Israel, the prospect of shooting each other’s drones down allowing the “enemy” to obtain the technology justifies further expenditure on weapons and technology to “stay ahead” of the competition. It is sort of ridiculous for Americans to be cheering on this US military confrontation with Iran when the deeper circumstances are seriously considered here. Where did Iran obtain the technology to do this with pinpoint accuracy: CNN VIDEO OF U.S AIRBASE RUINS: Iran Entirely Destroys Airbase – ‘Unimaginable Damage!’
________

Source: State of the Nation

“SOLEIMANIgate is just one of a Series of Black Operations and Psyops Executed to Blow Up the Shia Crescent, Over-throw the Iraqi Government, Maintain the U.S. Occupation of Iraq, Push the Greater Israel project and Thwart China’s Belt and Road Initiative in the Middle East. All of these Warmongering Schemes make up IRAQgate. The Neocon Zionist’s Main Goal is Regime Change in Tehran in 2020.” — Intelligence Analyst & Former U.S. Military Officer

President Trump has always wanted to steal Iraq’s oil (see tweet above). Well, now we have proof from the Iraqi Prime Minister’s own testimony that Trump wanted the oil and much more. And that Trump was willing to do whatever he had to to successfully coerce the courageous PM including assassination. See: Repugnant U.S. Presidential Perogative: Declare Enemy Leaders Terrorists, Assassinate Them via Predator Drones

The back story to Trump’s transparent war crimes actually goes much deeper that multiple illegal assassinations; it actually concerns the complete decapitation of the entire military field leadership of Iran and Iraq responsible for the neutralization of ISIS.

Rarely does this raw truth leak out, but the Zio-Anglo-American Axis will not tolerate anyone messing with their ISIS terror groups and countless terrorist cells. Hence, Trump, acting as an agent of the real ISIS (ISRAELI SECRET INTELLIGENCE SERVICE), issued warnings to the Iraqi prime minster that served to blow wide open SOLEIMANIgate. As follows:

Every day that goes by reveals more about the complex and convoluted plot being carried out by the Trump administration to keep Iraq as a feudal state.

There are several reasons for this bellicose foreign policy being implemented throughout Iraq. Not only will President Trump never speak about these, he has done his level best to deceive the American people as he misrepresents himself as a peacemaker when he is, in reality, a hardcore warmonger. See: Trump Illegally Waging Undeclared War in Iraq with Israel

Trump’s unveiled deceitfulness and treachery is best illustrated by his signature scandal known as SOLEIMANIgate.

Because Trump himself was the star of his own reality show — SOLEIMANIgate — his role form start to finish reveals him to be an extraordinary CON MAN. A con man whose presidential actions have had awesome consequences for the entire Middle East.

The following 3 previous exposés lay bare the perfidious conduct that Trump is guilty of. Until now he was able to always worm his way of his nefarious deeds. This time, however, his own words and actions incriminate his as no other POTUS in history has ever done.

SOLEIMANIgate Blown Wide Open
SOLEIMANIgate: Was Trump blackmailed or bribed to assassinate the Iranian hero? Or, was he a willing co-conspirator in the murderous plot?
BLOWBACK COMING: The Illicit Assassination of General Qasem Soleimani by Trump Was an Act of War and Epic Blunder 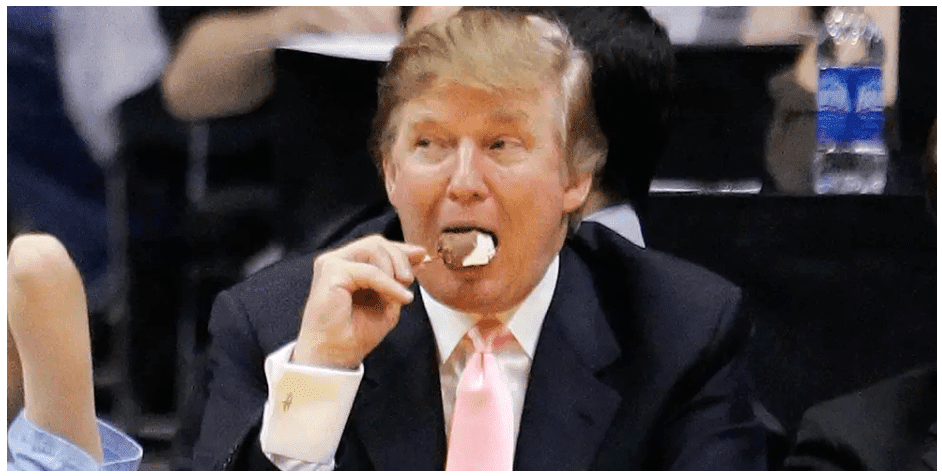 Photo from: SOLEIMANIgate: The significance of this single Trump episode speaks volumes about his malicious intent, malevolent purpose and malignant attitude

The preceding photo says it all about Trump.

His MOSSAD handlers obviously staged the photo-op so that his base of Trumptards would be energized by his ‘cool demeanor’ in the aftermath of his cold-blooded assassination of the Iranian hero … who really defeated ISIS.

In hindsight, it’s now clear that Trump’s SOLEIMANIgate scandal was an extremely calculated black operation designed to remove a HUGE obstacle for the Neocon Zionists who want to conquer Iran.

Trump’s brash and illicit assassination of the Iranian Major General speaks volumes about what Trump is willing to do for his Zionist masters in Israel. Shamelessly murdering the single greatest warrior who wiped out ISIS, while Trump himself claimed to do so, will define his disastrous legacy as it will inevitably produce some catastrophic instant karma.

Not only did Trump own the despicable killing of general Soleimani, he reveled in it as few world leaders have ever done in human history.

That his masters in Tel Aviv would order Trump to perpetrate such a heinous war crime is quite telling about the real mission. Vastly disrupting the peace-making in the Shia Crescent that had been taking place was a primary Israeli goal. For it is the Shia Crescent that poses the greatest threat to Israeli dominance in the Northern Levant.

Clearly, the Zionists know that a military and/or economic alliance between Iran and Iraq ultimately spells disaster for the apartheid state. They also know that the systematic militarization of the Shia Crescent will introduce existential threats to Israel that cannot be tolerated by the grand poobahs in Jerusalem.

This is exactly why the MOSSAD, CIA and MI6 implemented the black operation and psyop now known as SOLEIMANIgate. While it was a HUGE gamble, the perps knew they had a lot to lose were Tehran and Baghdad to make common cause.

As the following comment makes abundantly clear, Trump’s main mission in all of this was to blow up the Shia Crescent, and, boy, has he done that.