‘We have to make a living’

Some restaurants are defying California lockdown rules: ‘We have to make a living’ 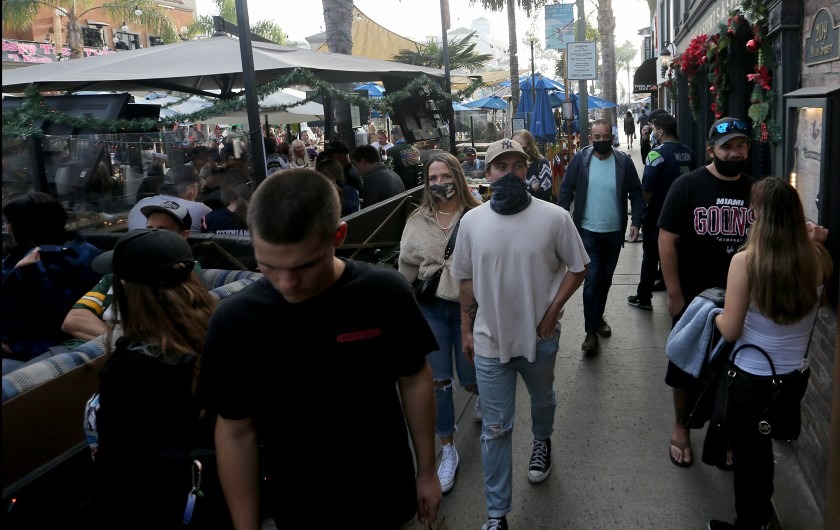 Dino Ferraro texted friends from a concrete bench next to the Huntington Beach Pier on Monday as he tried to sort out his worries.

He has mounting bills — more than $100,000 from back rent owed for his two restaurants, Capone’s Italian Cucina and Black Trumpet Bistro, both a quick drive from the water.

He spent thousands of dollars deep-cleaning and disinfecting both businesses, three times each in the past months, he said, along with complying “with every demand required.”

Now, like thousands of other restaurants in much of California, he began Monday with a new set of restrictions, including a suspension of outdoor dining, which had been a lifeline for his business.

California officials issued the stay-at-home order as COVID-19 cases continued surging to unprecedented levels, pushing hospitals’ precious intensive care beds perilously close to capacity. And officials warn the situation will likely get worse before it gets better as more people who were infected over Thanksgiving weekend fall ill.

Health experts have said this period is among the most dangerous points of the pandemic as the coronavirus spreads rapidly through the state.

But for Ferraro and others, the economic toll poses its own existential threat. While many businesses in areas covered by the state’s new regional stay-at-home order appear to be complying, some are trying to figure out ways to keep their businesses going.

Ferraro said he was “experimenting” with staying open, offering outdoor dining and a few indoor tables spread 12 feet apart at both locations.

He had to close during lunch but was happy to provide masks for people coming by for dinner who neglected to bring them.

He says he and his family are “not in denial about the virus, but we have to move forward. We have to make a living. We do feel for the people at risk. They should stay home.”

The timing of the state’s latest order is the newest blow, in a year full of them, for many businesses — which have been battered by coronavirus restrictions — and to the psyche of Californians, who for months have lived with its threat hanging over their heads.

Officials, though, have said desperate times call for drastic measures. The number of new daily coronavirus cases has skyrocketed to a level that would have been unthinkable just weeks ago. California hospitals are already contending with an unprecedented wave of more than 10,000 COVID-19 patients, and the state is on the brink of recording its 20,000th death from the illness.

“Once people die, they’re gone from our lives forever — and there’s no way to measure that impact at all,” L.A. County Public Health Director Barbara Ferrer said during a briefing Monday. “And every death is a tragedy, particularly those deaths that, in some ways, if we were all better at doing our part, we could be preventing right now.”

Southern California and the San Joaquin Valley are already below that threshold — as of Monday their ICU availability had tumbled to 10.9% and 6.3%, respectively.

On Monday, San Luis Obispo, Santa Barbara and Ventura counties said they might seek approval from the state to create their own Central Coast region, allowing them to assess restrictions without being tied to the much more heavily populated counties to the south.

“Being kept in the Southern California region any longer could cause preventable educational and economic hardships to communities in the Central Coast Region,” Ventura County officials said in a statement.

Dr. Robert Kim-Farley, a medical epidemiologist and infectious disease expert at the UCLA Fielding School of Public Health, said he thought the state’s regional approach was reasonable, given that if, say, Ventura County’s ICUs are overloaded, L.A. County’s hospitals have historically been called upon to help.

With a court case being heard on Tuesday challenging L.A. County’s ban on outdoor dining, Ferrer declined to comment on the lawsuit but did say there was ample evidence that outdoor restaurant dining was too risky to allow now, with the virus so much more widespread than before.

“We could tolerate that risk before,” Ferrer said, when only 1 in 800 people in L.A. County were out and about and contagious with the virus. Now that 1 in 145 are contagious and the hospital system is about to be overwhelmed, “you have to look at all of the activities and say: ‘We need to reduce risk as much as possible everywhere.’”

One of the cities covered under the new state order is Huntington Beach in Orange County, which has long been a hotbed of resistance to pandemic-inspired governmental restrictions and even to wearing masks. But its pier and downtown district were fairly quiet Monday, just after the new rules took effect.

An exception was Basilico’s, a restaurant that has garnered national attention for promoting a no-mask rule — and received plenty of support in the process from both local and visiting customers.

Drivers pulled up steadily Monday to pick up their orders of chicken parmesan and other rustic-style dishes. Inside, workers said they were almost sold out of their $25 T-shirts emblazoned with the phrase, “Leave the mask, take the cannoli,” a play on words inspired by the film “The Godfather.”

“How many shirts do you have left?” asked Roxanne Marie, a diner from Lakewood digging into the house salad with two of her friends. The women were accompanied by their boxers and her Beauceron, a well-behaved French herding dog observing a group of nine adults and children streaming in.

“If other restaurants would just be brave enough to open up, like this one, the economy would improve. These officials are clamping down and they probably don’t want anyone dying on their watch. But you know, people are dying, and that’s from broken hearts, loneliness and depression. We can’t stay home all the time, there’s nothing to do.”

It’s unclear if restaurants that defy the ban will face action from local or state officials. Orange County’s sheriff has said his deputies will not be dispatched to calls involving face coverings, gatherings or stay-at-home rules, calling compliance “a matter of personal responsibility and not a matter of law enforcement.”

Some Orange County leaders say they are lobbying the governor to consider a different approach that would not lump their county in the same region as L.A., which has been hit harder by COVID.

Ferraro, who grew up helping his mother make pizza and lasagna, says he is not just concerned about himself. He said he had 58 employees and that meant “58 families are getting fed — how can we think of layoffs?”