Who really bioengineered this coronavirus global pandemic? And why? 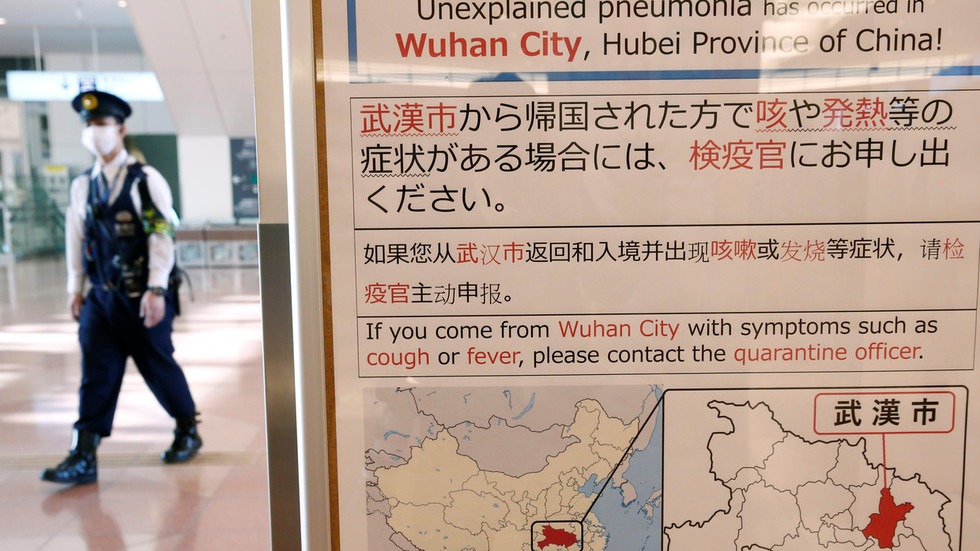 A policeman wearing a mask walks past a quarantine notice about the outbreak of a novel coronavirus in Wuhan, China at an airport in Tokyo, Japan, January 20, 2020. © Reuters / Kim Kyung-Hoon

The deadly pneumonia-like illness that has sickened hundreds and killed nine in and near Wuhan, China has turned up in the US, despite precautions, as China’s neighbors ratchet up screening efforts to prevent a global pandemic.

A Snohomish County, Washington man has become the first officially confirmed novel coronavirus case in the US. Local officials have not named the man, who is said to be very sick. He was hospitalized with pneumonia last week after returning from the Wuhan region, where the illness has already claimed nine lives, according to Chinese authorities.

It’s not immediately clear how many other Americans may have been exposed to the disease, which is believed to have its origins in a seafood and poultry market in the city of Wuhan, home to 11 million people.

Over 440 cases had been confirmed by Wednesday in China, cropping up in cities including Beijing, Shenzhen and Shanghai; cases have also been reported in Thailand, South Korea, Japan, Taiwan, and – now – the US. Infectious disease experts from Imperial College London estimated the disease toll to be much higher, however, suggesting on Saturday that at least 1,723 people might be infected.

The US Centers for Disease Control and Prevention set up screening points at airports in San Francisco, Los Angeles, and New York on Friday in hopes of catching coronavirus carriers before they made it into the country, but they were apparently too late – or too far south – for US Patient Zero. While the CDC has claimed the threat to Americans is low, it also claims to be taking “proactive preparedness precautions.”

Russian airports in Moscow, Ekaterinburg and Irkutsk stepped up screening of travelers arriving from China to try to identify infected people on Tuesday, after it became clear the virus is able to spread from human to human. India has also expanded thermal screening of passengers arriving from China, including Hong Kong, to seven airports, among them Chennai, Bengaluru, Hyderabad and Cochin, in addition to New Delhi, Mumbai and Kolkata.

The sole South Korean airport operating direct flights to Wuhan set up special gates for passengers back on January 3, while Singapore also expanded travelers’ temperature screenings at Changi airport. Malaysia beefed up its own evaluations at the major airport in Kuala Lumpur, and the Bangladesh aviation watchdog also ordered screenings for travelers from China to look for any signs of the illness. Australian health officials, meanwhile, are distributing pamphlets and asking everyone coming from Wuhan to identify themselves if they feel any symptoms.

It’s not entirely clear how easily the virus – which causes pneumonia-like symptoms including fever, cough, shortness of breath, and chest tightness – spreads from person to person, or what predisposes a person to contracting (or dying from) it, but authorities believe it initially jumped from animals at the Wuhan market to humans. The World Health Organization is due to weigh in on Wednesday on whether the outbreak will be declared an international public health emergency.