Australian PM Scott Morrison has been accused of lacking leadership during the bushfire crisis – by the man he replaced after a party room coup.

Malcolm Turnbull, who was deposed in 2018, told the BBC that Mr Morrison had misled the country by “downplaying” the influence of global warming.

Mr Morrison apologised last month for taking a US holiday amid the fires. He has insisted his policies are adequate.

But Mr Turnbull said he “cannot explain” his successor’s approach.

In a wide-ranging interview, Mr Turnbull also said US President Donald Trump was the world’s “leading climate denier” and that America’s lack of leadership was “extremely damaging”.

Mr Turnbull said “everybody knew we were in a very dry time” before the fire season, and that it “was likely to be very bad”.

“Rather than doing what a leader should do… [Mr Morrison] downplayed it, and at times discounted the influence of climate change, which is just nonsense from a scientific point of view. So that’s misleading people,” said Mr Turnbull.

“Then of course [he] chose to go away on holiday in Hawaii at the peak of the crisis. So I can’t explain any of that.

“It’s just not consistent with the way in which a prime minister would or should act in a national crisis like this.” 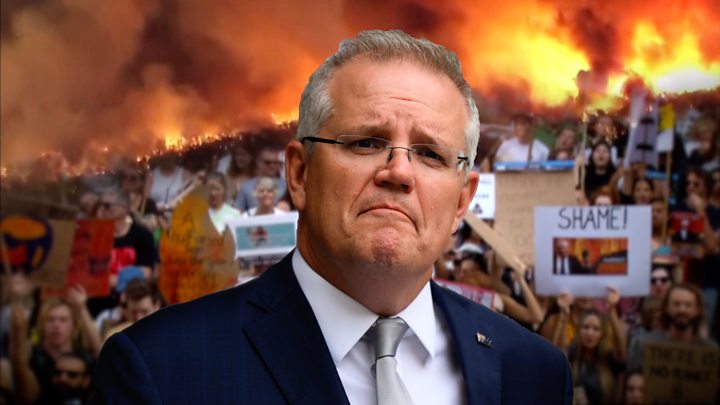 Can Australia’s PM Scott Morrison recover from the fires?

Since September, bushfires have scarred Australia. At least 30 people have died, livelihoods have been lost along with thousands of homes, while the catastrophic impact on wildlife may never be known.

Mr Morrison has conceded he caused “great anxiety in Australia” by taking his family to the US as record-breaking heat exacerbated fires.

“I know there are some who’ve tried to make political points and score points in the midst of these disasters, and that’s disappointing,” he said before Christmas.

He asserted that climate change was “one of many factors” responsible for the blazes.

As the fires have raged, so has the debate about climate change and its part in Australia’s destructive summer.

Mr Turnbull took aim at former colleagues in the governing Liberal Party, accusing another ex-prime minister, Tony Abbott, of being “probably the most prominent climate denier in Australian politics, but there are plenty of others” who were engaged in a “war against science”.

“It is an extraordinarily irrational and self-destructive approach,” Mr Turnbull said.

Mr Turnbull’s prime ministership began in 2015 when he removed Mr Abbott, a long-time rival. He was in power for three years before being ousted in similar fashion.

It was a fevered period in Australian politics, and Mr Turnbull was castigated by a senior minister as being spiteful and indecisive. He also faced criticism externally for not doing more while in power.

Shortly before he was replaced, Mr Turnbull abandoned his government’s flagship energy policy in a last-ditch concession to his party’s right wing.

The policy would have set in legislation Australia’s emissions target, which has long been criticised as inadequate for a wealthy nation. The 2030 target of a 26% reduction on 2005 levels is one of the weakest among G20 nations.

But the University of Oxford graduate, and former barrister and banker told the BBC he was the victim of a ruthless political insurgency.

“The right [wing] in the Liberal Party essentially operate like terrorists,” he said.

“Now I’m not suggesting that they use guns and bombs or anything like that, but their approach is one of intimidation.

“And they basically say to the rest of the party…if you don’t do what we want, we will blow the show up. Famously one of the coup leaders said to me, ‘you have to give in to the terrorists’.” 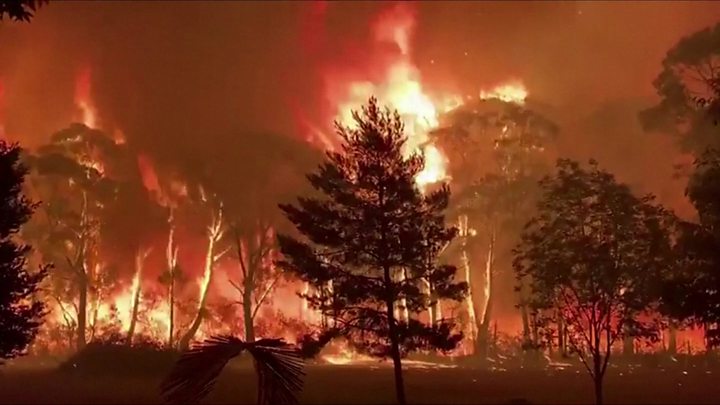 There is also a picture with Mr Trump. Not so much a happy snap – the pair famously clashed over a refugee swap deal and there’s hostility, too, over the environment.

“Trump is playing a very destructive role in terms of climate action. Trump makes no bones about it. He says global warming is rubbish,” Mr Turnbull said.

“Trump is trying to put a brake on global action to reduce emissions. The lack of American leadership is extremely damaging.”

“How many more lives and homes have to be lost before the climate change deniers acknowledge they are wrong?”