SEATTLE SHOOTING: Why are there so many Gladio-style shootings in sanctuary cities?

1 dead and 7 injured, including 9-year-old boy, in mass shooting on downtown Seattle sidewalk

The area around Third Avenue and Pine Street has long been one of the grittiest in downtown Seattle, a grim reputation underscored Wednesday when gunfire erupted during the evening commute, leaving a woman dead and seven others injured, including a 9-year-old boy, and a suspect or suspects still at large.

It was the third shooting in the downtown area in a little more than 24 hours, including an incident earlier Wednesday afternoon where police shot and wounded a man who was reported to have had a gun. On Tuesday, a 55-year-old man was found dying from a gunshot wound in a stairwell at Westlake Center, less than a block away from Wednesday’s mayhem.

The shooting Wednesday occurred around 5 p.m. outside the McDonald’s on the southeast corner of the intersection, just as hundreds of commuters crowded into one of the busiest transit corridors in the country. Witnesses reported a volley of gunfire and a surge of panicked people running for cover.

Douglas Converse was standing right outside Westlake Station when he heard the gunfire. Converse, 60, said he saw two people collapse near Pine and Third.

“I saw a couple of bodies go down,” Converse said. “I saw everybody go running, and I wanted to see if I could be any help.”

Police Chief Carmen Best, who responded to the scene, said the shooting happened after a dispute outside the McDonald’s. Police believe there were multiple shooters, but they don’t know how many, and it wasn’t clear Wednesday whether any of the injured had been among the shooters or part of the argument.

“Everything is possible at this point,” Best said during a news conference Wednesday night.

Police had not announced any arrests. Detectives were interviewing witnesses and gathering video from business surveillance cameras for review, Best said.

“There were a lot of people outside, guns came out, and people started running,” Best said. 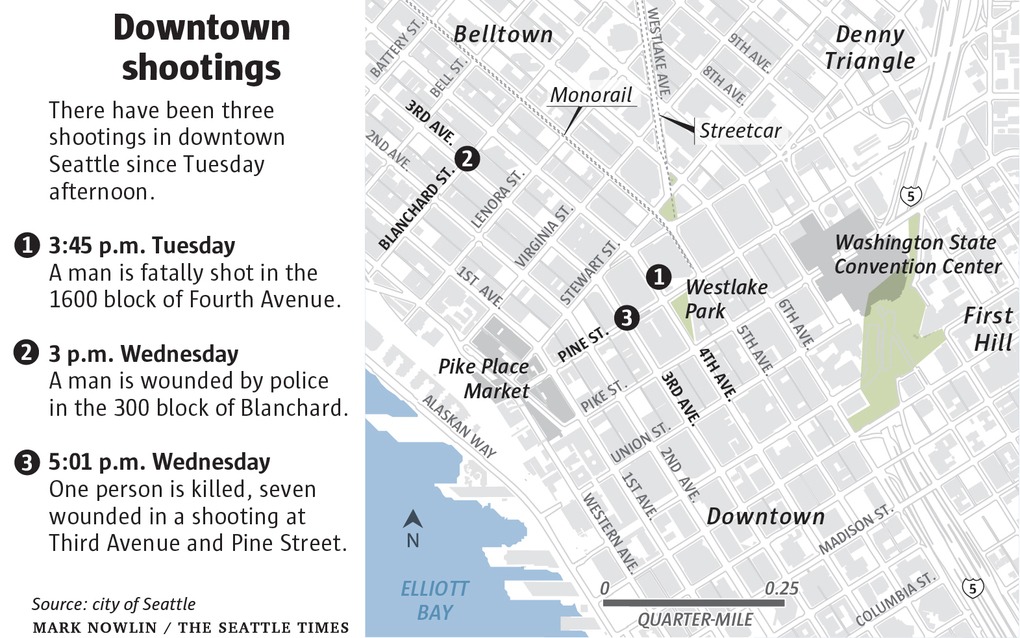 According to Seattle Fire and Susan Gregg, a spokeswoman at Harborview Medical Center, a woman in her 50s was in critical condition and a 9-year-old boy had been upgraded from serious condition to satisfactory. A 32-year-old man also was at the hospital in satisfactory condition, while four men, ages 21, 34, 35 and 49, had been treated and released by Wednesday evening. The victims were suffering from gunshot wounds to the legs, chest, buttocks and abdomen.

The woman who died at the scene was in her 40s, according to fire department spokesman David Cuerpo. A body under a sheet was visible on the sidewalk outside the McDonald’s.

Officers responding to the shooting scene found the victims in about a one-block radius, Best said.

One of the people shot was an Amazon employee, a spokesperson for the company confirmed. They were shot outside the company’s Blue Shift offices, which are in the Macy’s building, and were moved inside the building to receive medical care from first responders.

“We are deeply troubled by tonight’s events and our thoughts go out to everyone impacted by this tragedy,” the spokesperson said in a statement.

Tyler Parsons, 25, was working the register at Victrola Coffee Roasters at Pine and Third on Wednesday evening when the shooting occurred. He said he heard no shots — they play music loud in the store, Parsons said — but customers started dropping to the ground.

He waited a couple of minutes before walking back out. Victrola is inside a larger retail and office space; Parsons went into the building lobby, he said, and saw two victims: one outside, lying in front of the building, visibly injured but alive and moving. The second victim was inside the lobby, up against the security desk, with an apparent gunshot wound to the leg. He muttered, “I think I got shot, I think I got shot,” Parsons said.

Police taped off the entire block, including the coffee shop.

“We’re just kind of hanging out here,” said a shaken-sounding Parsons, while he was waiting until he and others still in the building could leave. The shooting was “just kind of terrifying. Terrifying it’s so close.”

“We’re just trying to figure out how to get out of here safe,” Parsons said.

Alex Bennett, a former nurse who lives above the McDonald’s at Third and Pine, was getting coffee at Victrola when she heard a volley of gunfire.

“Everyone in the coffee shop went down on the ground, hiding behind tables,” she said. “The security guard locked the door.”

Out on the street, she described chaos as people getting off buses were met by people running from the scene of the shooting. She also saw people who’d collapsed on the sidewalk, including one man in his 30s who had been shot in the leg outside the coffee shop.

Bennett helped a security guard who was putting pressure on the man’s wound.

Bennett reassured the man he’d be OK and kept him calm until police and medics arrived. At the man’s request, Bennett texted his wife to tell her what had happened. She said she got a message back, that the wife was in San Diego but was heading to the airport to get a flight back to Seattle.

Within a couple minutes of the gunfire, Bennett said she saw an officer running toward the shooting with an assault-style rifle. Another shooting victim made it into the coffee shop and was helped by people inside, she said.

Samantha Cook, 40, of Edmonds, said she was refilling her Orca card in Westlake Station when she heard the shots.

We need your support

In-depth journalism takes time and effort to produce, and it depends on paying subscribers. If you value these kinds of stories, consider subscribing.

“I was on the first set of escalators,” Cook said. “There were a lot of gunshots that started going off — maybe 10 or 11. It was just rapid fire.”

The scene was chaotic, she said.

“Everyone started flooding the [light-rail] tunnels,” she said.

The police response to both downtown shootings Wednesday snarled a major commute corridor for public transit. Westlake Station was evacuated after the shooting, at the request of law enforcement, but full light-rail service resumed later. King County Metro Transit buses in the area were being rerouted and were far behind schedule.

Washington Gov. Jay Inslee issued a statement saying he joined Best and Seattle Mayor Jenny Durkan in urging anyone with information about the shooting to call the tip line at 206-233-5000.

“I am horrified and dismayed to hear about the shooting in Seattle tonight,” he said. “We grieve for the one individual confirmed dead in the shooting, and wish a full and speedy recovery to those who were injured.”

In a statement, the Downtown Seattle Association called on public officials “to devote the resources necessary to improve safety in downtown and take back Third Avenue from the criminals who have laid claim to it.”

“The heart of our city should feel safe and welcoming for all who live, work and visit here,” the statement said. “On behalf of residents, small business owners, employers and visitors, we say enough is enough.”

Wednesday’s shooting happened near another shooting that occurred Nov. 9, 2016, when five people were wounded outside a 7-Eleven on Third between Pike and Pine. Witnesses said some people were arguing when the gunman began to walk away, and then turned around and fired into the crowd. Downtown had additional police presence because of an anti-Trump rally that started at Westlake Center earlier in the evening. Police said the shooting was not related to the protest.