CORONAVIRUS: A Bio-Attack that Poses ‘a real threat to China’s economy’

Why the coronavirus is a real threat to China’s economy 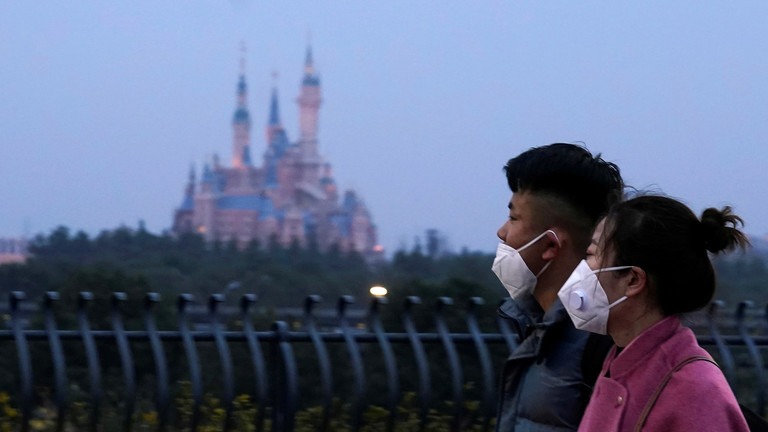 Visitors walk past Shanghai Disney Resort, that will be closed during the Chinese Lunar New Year © Reuters / Aly Song

The deadly new coronavirus has started spreading across China and beyond and has infected hundreds of people. The outbreak has already started to take a toll on the nation’s economy right ahead of the Chinese New Year.

As the death toll and the number of confirmed cases is rapidly rising, China has put on lockdown cities in Hubei province, including Wuhan, from where the outbreak is believed to have originated.

The virus is set to disrupt the plans for thousands of Chinese right before one of the biggest national holidays — the Lunar New Year, or Spring Festival — that kicked off on Friday. This is one of the busiest periods for travelling, as the holiday is traditionally celebrated with family and is definitely a hot shopping season, when people spend money on leisure and gifts.

With the transport links to the effected cities closed, China’s State Railway Group said passengers could get refunds for rail tickets nationwide from January 24. Apart from cancellation of flights to and from Wuhan, some air carriers are already avoiding the city. Chinese passengers who booked flights to or from Wuhan can ask for a free refund from airlines, the nation’s civil aviation regulator announced earlier this week.

Meanwhile, cities have started to prevent people from large gatherings in an apparent attempt to stop the risk of infection. On Thursday, Beijing cancelled major public events, including Chinese New Year temple fairs. Another major city, Shanghai, which is much closer to the epicenter of the outbreak, cancelled some activities scheduled for the holiday season and said that some tourist attractions will be closed, including some parks, viewpoints on the skyscrapers and main museums.

The local tourism industry has also begun to prepare, as one of the largest Chinese online travel agencies, Trip.com, also known as Ctrip, offered its clients free cancellation on all hotels, car rentals and tickets for tourist attractions in Wuhan. Some other agencies, including Meituan, ly.com (also known as Tongcheng-Elong), qyer.com and Alibaba’s Fliggy have reportedly followed suit.

The biggest movie-going week has also been disrupted by the deadly virus. All seven Chinese films, that were set for release this weekend and expected to generate as much as $1 billion in ticket sales, announced they were pulling the screenings.

While the withdrawal of film premieres might not be a big deal, it could discourage people from leaving home and spending money, thus affecting local businesses during the usually hot sales season.

The epidemic came as investors are still reeling from US-China trade tensions, driving down some key Asian stock markets. Despite Hong Kong’s Hang Seng index edging higher on Friday, it finished the week down 3.8 percent, posting the largest weekly decline since November 2019.

The Shanghai stock exchange was closed on Friday due to the public holiday, and finished the week in the red on Thursday, with the Shanghai Composite index losing 3.17 percent in one week.

The Nikkei 225 in Japan closed a fraction higher on Friday, but fell nearly one percent compared to the previous week.

Meanwhile the virus has also had an effect on the oil markets, with futures for both global benchmarks Brent and WTI tumbling this week. China is one of the major importers of crude and its demand is far greater than that of the US. The outbreak could cut oil demand by 260,000 barrels per day and push prices down by $3 per barrel, Goldman Sachs has warned.

Can the new virus be as deadly as SARS?

The new coronavirus is so far less lethal than a similar virus outbreak that spread from China in the early 2000s, known as severe acute respiratory syndrome (SARS). However, there are concerns about the disturbing similarities in the way the disease is spreading, with fears that it could be even worse, as China today has a much better transport infrastructure and links to other countries.

“If you look at what happened in 2003, estimates range from [reducing GDP in China] by 0.5% to 2%, half a percent for Southeast Asia, and the stock markets sold off double digits,” billionaire investor Paul Tudor told CNBC during the World Economic Forum in Davos.

Others think that it may be too early to speak about macro effects of the virus, as the World Health Organization (WHO) has recently calmed investors when it did not qualify the outbreak as a global emergency.