Why the Impeachment Trial may Come to an Abrupt End 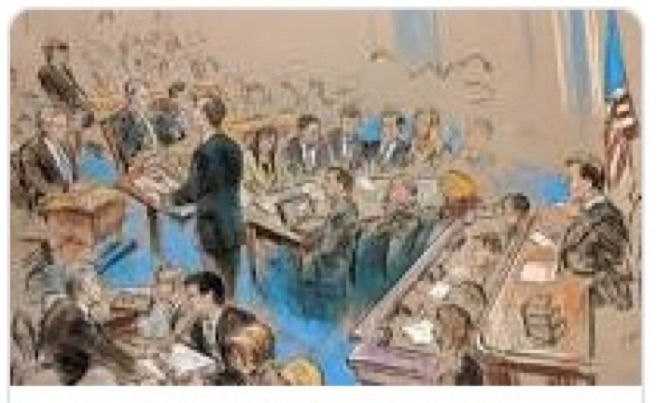 “If we don’t impeach this guy, he will get reelected”–Rep. Al Green (D-TX)

For only the third time in American history, a President of the United States has been impeached by the House of Representatives, in this case, on the grounds of Abuse of Power and Obstruction of Congress. The first article purports to be based upon a phone call with the President of Ukraine, where he is alleged to have withheld foreign aid unless Ukraine were to investigate former Vice President Joe Biden, a potential political rival in the 2020 Presidential Election. The second alleges that the President has defied Congress by refusing to honor subpoenas for witnesses and evidence in support of these allegations. The principal problem with these charges is that they do not obviously qualify as violations of the US Constitution, which specifies that impeachment requires “Treason, Bribery, or other high Crimes and Misdemeanors”, which are not among the offense with which Donald J. Trump has been charged.

The present trial cannot be understood without appreciating the partisan character of the proceeding. The Founding Fathers were wary that, in a divided Congress, where the House was dominated by the members of one party but the presidency held by a member of the other, impeachment could become a tool of policy where, because of purely political differences, the House would bring articles of impeachment as instruments to remove a president whose policies they did not support rather than because of any real crimes or misdemeanors. Indeed, this trial is fraught with indications that this may be precisely such a case, where allegations of collusion between the President and Russia (known as “Russiagate”) have dominated the media for nearly three years now and where the latest incarnation (known as “Ukrainegate”) appears to many impartial observers to be nothing more than a thinly veiled version of Russiagate 2.0.
The Mueller investigation, which was widely expected by Democrats to create a powerful case for impeachment over Russiagate, fell flat, when its ostensible author, Robert Mueller, former head of the FBI and lauded as akin to a national hero, turned out, during his Congressional testimony, not to know the contents of his own report and where no proof of collusion has ever emerged either then or since. Indeed, it turned out that the allegations of Russian collusion were introduced by Hillary Clinton’s campaign managers, Robbie Mook and John Podesta, in an effort to distract attention from her incompetent campaign, Podesta’s involverment in Pizzagate (the US franchise of the world-wide phenomenon known as Pedogate), and her own financial entanglements with Russia, involving the sale of 20% of US uranium reserves to Russia through the Canadian company, Uranium One, with the approval of then-Prsident Barack Obama.
Indeed, investigations by the Inspector General of the Department of Justice, Michael Horowitz, have exposed the abuse of the FISA Court to obtain warrants to conduct surveillance on parties connected to the Trump campaign, which were justified on the basis of a dossier fabricated by former MI6 agent, Christopher Steele, who has admitted under oath to a British Court that he composed it as an employee of Hillary Clinton and the Democratic National Committee. It was an indispensable element in (what was called Operation Crossfire Hurricane, involving many high ranking members of the federal government, including John Brennan, James Comey, Andrew McCabe, and even Susan Rice and (ultimately) Barack Obama. When Federal Prosecutor John Durham’s investigation becomes public information, it may reveal the greatest political scandal in the history of the United States–with perhaps the exception of Trump’s impeachment.

Even though House Speaker Nancy Pelosi urged various committees of the House to conduct their hearings expeditiously, emphasizing that fashioning articles of impeachment was a matter of national security and of the greatest urgency, once they had been drafted, she refused to send them to the Senate for trial, attempting to manage how the Senate would conduct the trial as the Speaker of the House. Mitch McConnell, the Senate Majority Leader, however, was not disposed to play Nancy’s game, where, under pressure from members of her own party, she reluctantly forwarded them to the Senate on 15 January 2020, nearly a month after they had been adopted by the House on an overwhelmingly party-line vote taken on 18 December 2019, whereupon McConnell moved forward to resolve the matters pending for the trial by the Senate to take place, including especially formalizing the rules under which the trial would proceed.
On Monday, 20 January 2020, the Senate Majority Leader eased up on his plan for a tight two-day schedule to allow each side to have three days to present its case and allowing the House evidence to be admitted for the trial. McConnell did not change the rules for admitting witnesses or new documents, however. During a series of votes about specific witnesses, moreover, he prevailed–again and again–on straight 53-47 party-line votes, a powerful affirmation of the widely-held expectation that the President was most unlikely to be removed from office, a result that requires a 2/3 (or 67 vote) majority in the Senate. While that has never seriously been in doubt, there were questions about whether Mitt Romney, a harsh Trump critic, or Susan Collins or Lisa Murkowski might vote in favor of witnesses. As matters now stand, there appears to be no prospect for the introduction of new evidence or testimony during the trial by the Senate.
The Prosecution thus has three days to present its case–Wednesday, Thursday and Friday–while the Defense will then begin on Saturday and continue on Monday and Tuesday, absent a motion to dismiss, which may be expected when the Prosecution rests. Such a motion contends that, even if everything the Prosecution has alleged were true, no impeachable offense has been committee and therefore the charges should be dismissed. Alan Dershowitz, the brilliant Constitutional authority, has made that argument during interviews on cable networks, where many believe it will carry the day. The Democrats have been hampered by arguing, on the one hand, that the case for impeachment is overwhelming, but also, on the other, that additional witnesses and evidence are indispensable. They can’t have it both ways. The President’s tenure in office seems to be secure and his trial may come to an abrupt end just a few days hence.