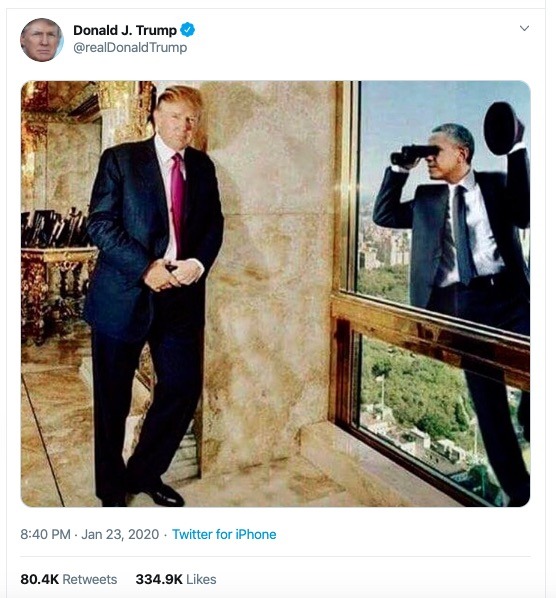 “Even if we impeach this guy, he will get reelected”—Contra Rep. Al Green (D-TX)

Watching the House present its case against the President, it became apparent why Nancy Pelosi had stalled for nearly a month before sending the Articles of Impeachment to the Senate. As a retired professor who has thousands of hours of public speaking experience, including hundreds of PowerPoint presentations, it was obvious that the mode, style and timing of the presentations by the House Manages were too slick, too smooth and too professional to have been their own work. My best guess is that this was a scripted-by-Hollywood production, where, were I to hazard a guess, my candidate for producer would be Rob Reiner, with input from anti-Trump zealots such as Robert Di Nero, where his role in “Taxi Driver” served as preparation for shooting up Donald J. Trump. This was an extremely well-written text where each presentation was rehearsed, counting on repetition to have a powerful effect, like The Force, upon the weak-minded.

While claims of Russian hacking have been debunked by our country’s leading experts on cyber-security, such as Bill Binney and Ray McGovern, the Democrats continue to plead the case for Russian intervention in our elections, making that claim a pillar of their argument that Trump represents a threat to national security on the ground that, having enlisted the assistance of Russia to steal the election of 2016, unless he is booted out through impeachment, he is going to do it again—offering a pretext in advance for why they are likely to suffer an humiliating defeat in 2020, even though there was no Russian involvement. The files were downloaded directly from the server by Seth Rich, an IT guy for the DNC, who supported Bernie and was disillusions at the brutality with which Debbie Wasserman Schultz sabotaged his campaign, shifting 13 primaries Bernie won to Hillary’s column to guarantee she would be their candidate.

What Veteran Intelligence Professionals for Sanity (VIPS) discovered was that the files had been downloaded in real time directly from the server at a rate that would have been impossible for distant hacking. Moreover, the familiar internet personality, Kim Dotcom has explained how he assisted Seth Rich in performing this task, where Seth appears to have transmitted these files to Julian Assange via Craig Murray, the UK Ambassador to Uzbekistan. Based upon my research, John Podesta appears to have wanted to make an example of a whistleblower and didn’t care if the evidence was not airtight and arranged to have him shot, where he survived the shooting with three non-life-threatening wounds and was treated at Washington Medical Center. According to a fourth-year resident who was there, he was doing fine until LEOs swarmed the facility and cut of treatment. He can’t guarantee Seth was allowed to die, but it looks that way.

So the very idea that Trump used Russia in 2016 and was now using Ukraine to set up his opponent, Joe Biden, in 2020 was based upon a false premise. The Democrats are not explaining that the US has a treaty with Ukraine in relation to criminal investigations; that asking for its government’s assistance to investigate Joe Biden and Burisma, a gas company where Joe’s son, Hunter, was on the Board of Directors with remuneration of $50,000 a month (with no discernible qualifications), was therefore appropriate and that the matter of withholding foreign aid did not even arise during the conversation. Indeed, the Federal Elections Commission has ruled that information about an opponent does not qualify as something of value under election campaign laws and where the request was entirely proper and within the scope of the President’s authority. Indeed, the U.S. Constitution invests the conduct of foreign policy in the nation’s chief executive officer.

While we have abundant proof of sleights-of-hand and abuses of authority and position, they were not committed by the President but by those who have sought, first, to deny him success in 2016 and now have continued their “resistance” against him in relation to 2020. Even the complaint form for whistleblowers was changed in advance to allow a party with no first-hand knowledge to subject their opinions, which was clearly an ad hoc move to initiate a campaign of disinformation against the President. The “whistleblower” has been identified as Eric Ciaramella, who was a member of the National Security staff who had worked for and supported Joe Biden in the past. He appears to have made his initial contact with Adam Schiff’s staff and, in all likelihood, even met with Adam Schiff himself, even though Schiff has repeatedly denied it. As many as two dozen staffers were listening into the call, the transcript of which has been released leaving no room for serious doubt that Trump had done anything wrong for any objective observer.

But it was perceived as an opportunity to attack him. Even though there was no bona fide basis for his complaint, which was based upon second and third-hand information he was given by partisan holdovers from the Obama administration, many of whom were involved in the abuse of the FISA court to justify warrants for FBI surveillance on his campaign. Indeed, the third and fourth of the four FISA warrants that were issued to justify surveillance of Carter Page, initially, and others associated with the Trump camp have been declared to be invalid, where they were supported by fake citations. The first and second are likely to succumb to review as well, which means that the investigations and convictions (of Paul Manafort, Michael Flynn, and Roger Stone, for example), which were justified on their basis, are going to be thereby tainted and ultimately reversed as “fruit of the poisonous tree”, an abuse of process that parallels the abuse of process in bringing impeachment charges against a president because they don’t like his policies.

The Founding Fathers feared that impeachment could be abused, which they sought to counter with the requirement of a 2/3 (67) votes to remove a president from office. Not one of the Senators on either side of the aisle appears to have been swayed by arguments of the House managers, who even included Trump’s joke about Hillary’s missing emails at a rally, “Russia, if you’re listening, I hope you’re able to find the 30,000 emails that are missing,” he said. “I think you will probably be rewarded mightily by our press”, as if it had been serious. And Schiff severely damaged his case by concluding remarks claiming to have a source who reported Trump had threatened Senators that, if they voted to oust him, he would have their ‘heads on a pike”. Several Senators were grossly offended, but no more so than when Schiff parodied Trump’s conversation with the President of Ukraine without acknowledging that it bore no discernible resemblance to the actual conversation, which we can all read for ourselves. The defense has begun and, without any doubt, it will prevail.

James H. Fetzer, Ph,D., a former US Marine Corps officer, is McKnight Processor Emeritus on the Duluth Campus of the University of Minnesota and co-founder of moonrockbooks.com.