How the coronavirus was traced back to the British Crown

CORONAVIRUS TRACED TO THE BRITISH CROWN

by AMERICANS FOR INNOVATION

Pirbright Institute is controlled by the Queen’s Golden Share

SERCO used its control of the U.S. Patent Office to issue its British bio company a patent on the Coronavirus in record time—that’s pure fraud 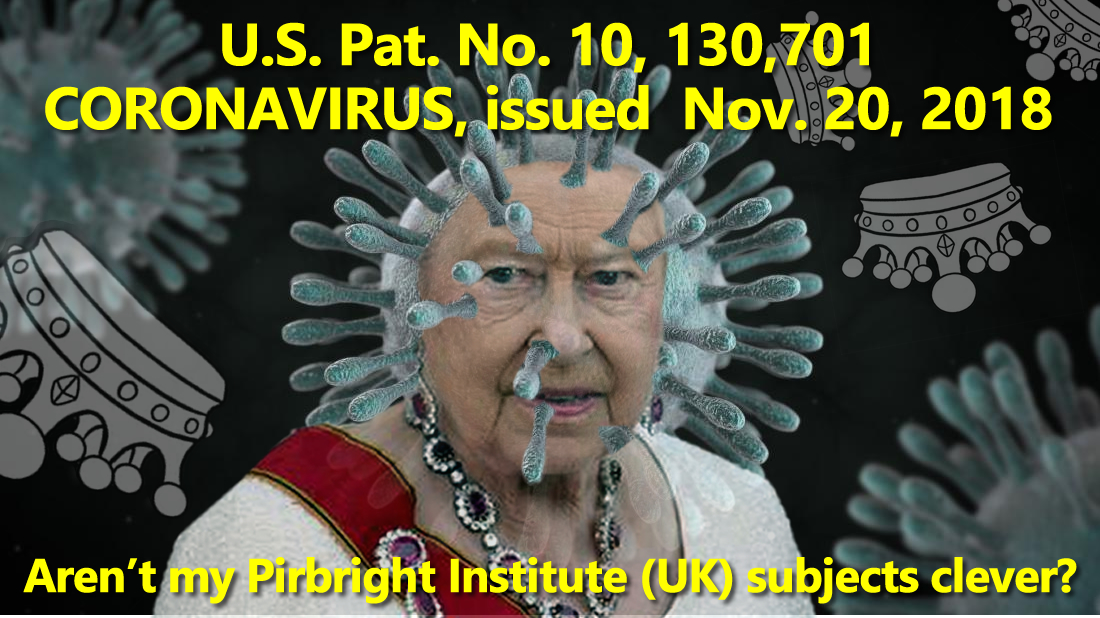 Fig. 1—The Queen’s company The Pirbright Institute holds U.S. Patent No. 10,130,701 on CORONAVIRUS. Pirbright tracks back to SERCO, which has the contract with the U.S. Patent Office to award its own patent application! This “inequitable conduct” in patent legal terms is fraud and invalidates the claim while the world fights this British-American Pilgrims Society-inspired emerging pandemic, in our opinion.
Graphic: AFI/AIM/The Conclave/The Cave Dwellers.
Reader Notice: New evidence is flooding in on Coronavirus and The Pirbright Institute. Therefore, rather than wait until all the evidence links are processed, we decided to go ahead and publish. Return several times over the next days to pick up the new evidence.

(JAN. 30, 2020)—The Coronavirus outbreak was just announced a health emergency by the World Health Organization (WHO). Tellingly, WHO is one of its creatorsas we will show below.

The Pirbright Institute is a British charity (Co. No. 00559784) that has a charter from the Queen. It is controlled by the UK Government’s Biotechnology and Biological Research Council (BBSRC). In turn, UK Research and Innovation oversees BBSRC.

BBSRC was created in 1994 by taking over the biological science activities of the Science and Engineering Research Council (SERC). In 1986, SERC was defunded by Sir Geoffrey E. Pattie, the Minister of State for Industry and Information. He simultaneously incorporated a commercial SERCO and merged RCA into it. Later he took control of Marconi, then merged it into GEC.

See also AFI. (Jan. 11, 2018). Meet The Person Who Can Remotely Crash Planes And Can Read Your Mind. Americans for Innovation.

Our research has tracked the Burroughs Wellcome & Co. involvement with bogus vaccines back to their experiments on 60,000 whites and black in British concentration camps during the Second Boer War that was promoted by the disciples of Cecil Rhodes like Viscount Alfred Milner, Winston Churchill and John Buchan, among others—all founders of the Pilgrims Society in London (1902), then New York (1903).

See AFI. (Jun 03, 2018). Spy-gate is directed by the Crown’s courtiers in the UK, not by Russia. Americans for Innovation.

On May 17, 2006, the U.S. Patent Office awarded the processing of all patents to SERCO—a company controlled by the British Crown. Those contracts have been renewed and are presently in operation.

In just 17 months, the SERCO-managed patent examiner Bao Q. Li issued the Coronavirus U.S. Pat. No. 10,130,701to Pirbright with almost no objections (that means it was probably a rubber stamp). This process normally takes three or more years.

Neither Pirbright nor the U.S. Patent Office disclosed their conflicts of interest in the issuance of this Coronavirus patent.

On the British side, everything about this Coronavirus tracks back to the Queen, the eugenics-loving Pilgrims Society, Crown Agents and her corrupt Privy Council courtiers (British Pilgrims Society suck ups).