CORONAVIRUSgate: Are they enforcing quarantines on cruise ships to spread the coronavirus at ports around the world?

Keeping passengers on ship may have helped spread of coronavirus, says one lawyer 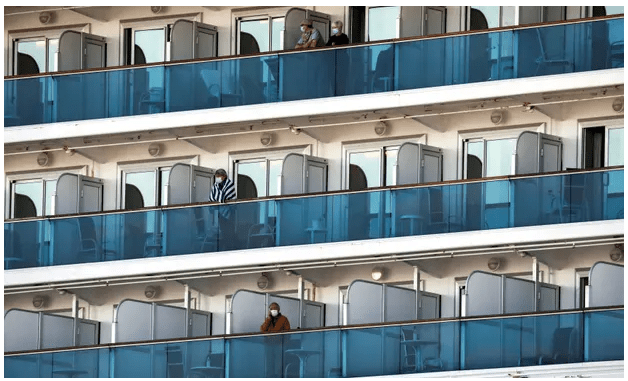 Thousands of people have spent the past two weeks in quarantine on the Diamond Princess cruise ship. Photograph: Athit Perawongmetha/Reuters

Quarantine conditions imposed on a stricken ship in Japan are both morally dubious and appear counterproductive, according to health experts who fear the vessel has become an incubator for the coronavirus Covid-19.

Thousands of people have spent the past two weeks stuck onboard the Diamond Princess cruise ship, which now accounts for the biggest cluster of cases outside mainland China. More than 540 passengers in the Japanese port Yokohama are confirmed to have the virus, after 88 additional cases were confirmed on Tuesday.

Experts are still trying to understand how easily the virus transmits, but there are fears that the conditions on the ship – quarantined after a passenger who disembarked in Hong Kong tested positive – have allowed the disease to spread more rapidly.

Roojin Habibi, a lawyer specialising in global health law, said the quarantine measure was an experiment carried out in real-time, and that it had turned the ship into “a boiling pot of transmission”.

On Tuesday morning, the UK government, which has come under increased pressure to intervene, said that it was working to organise an evacuation flight for 74 British passengers. The announcement came after the US chartered a flight on Sunday and several other countries announced plans to do so. About 200 Australian passengers were expected to be evacuated on a Qantas flight on Wednesday and taken to a location on the Australian mainland where they will be isolated for two weeks.

Dr Clare Wenham, an assistant professor of global health policy at the London School of Economics and Political Science, said the evacuation of US citizens raised broader questions about whether it was really necessary for people to remain on the ship. “The Americans are being allowed to disembark in some form to get to the airport. If that’s deemed safe, why can’t everyone else get off and be put in quarantine elsewhere?”

The decision to quarantine about 3,700 crew and passengers on the vessel was morally dubious, she added.

Japanese officials have defended the quarantine, and say that precautions have been taken to stop the disease from spreading on the ship. These includes providing staff with masks, encouraging handwashing and closing communal bars and restaurants.

The vast majority of people who catch the virus will recover, according to the World Health Organization, which has confirmed that data from the Chinese province of Hubei, the centre of the outbreak, suggested about 2% of cases were fatal.

Dr Michael Ryan, the chief of emergencies at WHO, said last week that countries should respect the human rights of travellers. “It’s really important that there’s an appropriate risk management approach being taken here,” he said.

It is not clear if all passengers on the Diamond Princess will face further quarantine in their home countries. On Monday, David Abel, a passenger who has posted video diaries from the ship, spoke about the psychological impact on those affected. “It’s all getting to us now – not just me, other passengers as well. It’s the not-knowing factor that is the real challenge,” he said in a YouTube video. On Tuesday morning he said he had been told that he had tested positive, but later said he doubted the results.

For the past two weeks, passengers have been mostly confined to their cabins, while staff wearing masks have delivered food to their rooms. The ship’s crew members, meanwhile, have reportedly continued to share bathrooms and eat together, which has prompted questions about the effectiveness of the quarantine measures.

Mark Eccleston-Turner, a lecturer in law at Keele University specialising in global health law, said conditions on the ship were worrying and said that human rights appeared to have become “a secondary concern during this outbreak”.

Under the International Covenant on Civil and Political Rights, any restrictions on civil liberties that are introduced in the name of public health must meet certain requirements to be considered lawful and legitimate, he said.

Such measures should not be arbitrary or discriminatory, they must be deemed strictly necessary, the least intrusive and restrictive option available and, among other things, based on scientific evidence.

While quarantines can meet these criteria, he said, the measures imposed on the ship do not appear to do so. “It is quite arbitrary in nature. Typically when you quarantine people in public health to prevent onward spread of a virus, you are quarantining people who you know have an infectious agent – people you know are unwell. The vast majority of people on this cruise ship are not infected and were not infected at the point that the quarantine began,” he said.

It was disappointing, he added, that the World Health Organization had not taken are stronger stance against such policies – particularly the wide-ranging restrictions introduced in China.

There are fears about the long-term impact of such policies on future outbreaks. Habibi, who is also a research fellow at the the Global Strategy Lab at York University in Canada, added: “By taking such dramatic measures, measures that are irrational and rooted in fear, we are basically dissuading the next country that has an outbreak in their borders from coming out to publicly report that fact to the world.”

Paul Hunter, professor in medicine at the University of East Anglia, said that while the quarantine seems to have stopped passengers from transmitting infections further around the world, the high number of cases reported on board over recent days suggests that measures to stop the spread on the ship had been ineffective.

“How and when these new cases acquired their infections is not currently clear so the reasons how and indeed when this transmission occurred in not yet known. The most likely route is direct person to person transmission when people are close to an infected person, but with currently publicly available information it is not possible to rule out other issues at this stage,” he said.

Efforts by government to evacuate affected citizens would understandably be welcomed by those on board, he said, but he added “such repatriation is not free from risks”.

“Considerable care needs to be made to ensure that the passengers do not transmit infection between themselves or to cabin crew during the flight home and once back on home soil they do not act as a focus for the spread of the disease into their home countries – any returning passengers may be put in quarantine on their return.”