Nearly a thousand people participate in event, including dozens of Chinese citizens, family members of Israelis quarantined on cruise ship 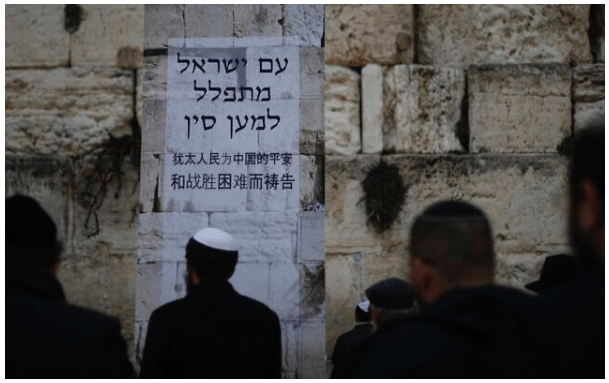 Jews pray at the Western Wall, in Jerusalem’s Old City, February 16, 2020. Jewish faithful held a prayer session in search of divine intervention to help stave off the coronavirus in China. Poster in Hebrew and Chinese says, ‘The People of Israel pray for China.’ (Ariel Schalit/AP)

As the deadly coronavirus continues to spread, hundreds of people held a mass prayer for the health and well-being of the Chinese people during a gathering on Sunday at the Western Wall in the Old City of Jerusalem, one of the holiest places for Jews.

The virus originated in China, where it has killed over 1,500 people.

Despite a downpour, nearly a thousand people participated in the prayer, along with dozens of Chinese citizens who are in the country, a statement from the organizers said. In addition to Hebrew prayers, a prayer was said in the Mandarin language and a ram’s horn, known as a shofar, was blown, a symbolic act in Judaism that is believed to invoke God’s mercy.

The prayer session was organized by prominent national-religious rabbi Shmuel Eliyahu, who is the head of the Community Rabbinical Association and chief rabbi of Safed, along with the Israeli branch of the Orthodox Union, an American Modern Orthodox synagogue network.

“The Chinese people need to know that the Jewish people are thinking of them and praying for and with them,” Eliyahu declared at the event. “May this unfortunate plague cease and vanish from the Chinese people and from the entire world.” 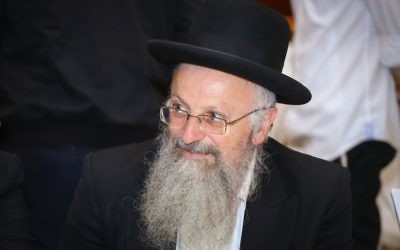 Raphael Dahan, whose parents, Shimon and Shalva Dahan, are on the Diamond Princess cruise ship quarantined off the coast of Japan, said he came to pray “for my parents’ health and for the well being of all Israelis, to return to Israel healthy.”

“We are waiting to hear from my parents and from the other passengers on the ship, while we wish to know whether they contracted the virus or not,” Dahan said.

“I did what I could to help with our heartfelt prayer,” said OU Israel Chief Executive Rabbi Avi Berman. “Hopefully, we can get rid of this terrible disease and as soon as possible.”

On Sunday evening, the Health Ministry confirmed that a third Israeli national on board the cruise ship had been diagnosed with the deadly novel coronavirus.

The new instructions will affect hundreds of Israelis, including Jerusalem Chief Rabbi Shlomo Amar, who is visiting Singapore to oversee the opening of its new Jewish cemetery and is expected to return later this week.

More than 1,600 people have died from the novel coronavirus in China since it was first detected in the central city of Wuhan, and five others have died outside China.