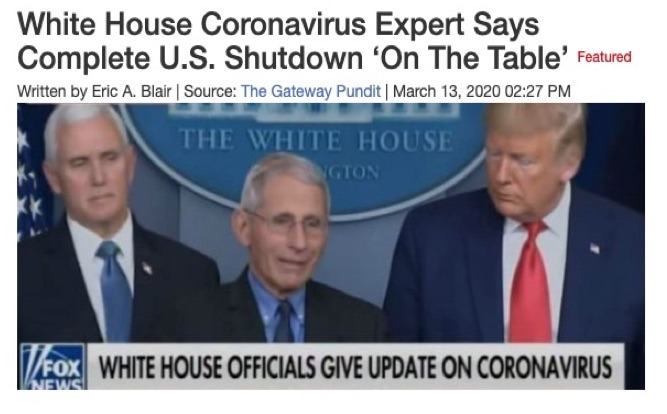 The Coronavirus Phenomenon is a Political Pandemic, not a Medical Emergency

[Editor’s note: The authenticity of the Kissinger quote with which I end this blog has been challenged, probably correctly. While it resonates as very likely views he holds, if he did not actually say them, I was mistaken to use it here. I have replaced it with a video of “New World Order” quotes.]

When everyone from the White House Coronavirus Expert to Cher thinks we are in the grip of an epidemic so massive that an appropriate response might require shutting down the US economically or forcing the President of the United States out of office for incompetence, you would think that something big is going on. Well, something big is going on, but its not what the mainstream media has led you to believe.

So I thought I would do something obvious by taking a look at how this coronavirus “epidemic”–or should I say, “pandemic”, since we are told that it’s enveloping the entire world in a wave of death–compares with other hazards to human life, such as something as pedestrian as fungal infestations, for example, to establish a comparison for all the hype and hysteria we are getting from the media:

According to the “Coronavirus World Map: live tracker of reported cases and deaths, including Italy and China”, which are major areas of concern, the disease, which has been code-named “Covid-19”, has spread to well over 100 countries, infecting more than 145,000 people and killing more than 5,400. This appears to be a seasonal outcome, however, where we might generalize and anticipate approximately 20,000 deaths during 2020.

Now 20,000 deaths in a year is not to be dismissed. Most Americans–and even the White House’s own Coronavirus expert, who thinks shutting down the entire US economy deserves serious consideration, not to mention Cher, who is not noted for her intellectual capabilities–seem to be oblivious of the fact that pedestrian fungi bring about millions of deaths every year. Yet we aren’t hearing of a “fungi pandemic” worldwide at all.

On the supposition that perhaps I needed to confirm the figure of 5,000 having died already from coronavirus, I sought out another source, which suggested the higher number of 5,432 persons had died, though whether it was just in the first quarter of 2020 was not entirely clear. What is clear, however, is that a million divided by, say, 20,000, for example, means the fungi epidemic is 50 times more serious than coronavirus (that is, 5,000%).

So why aren’t we hearing about the (overwhelmingly larger) fungi pandemic in comparison to the coronavirus? Could it be that the coronavirus pandemic is POLITICAL, while the fungal pandemic is MEDICAL? Even a group of high school students in Texas has determined that this pandemic was planned by experts they identify in their 3:20 video report, which someone ought to send to the White House coronavirus expert.

It turns out that, in facing what is alleged to be “a challenge unprecedented in recent history”, officials tend to fall back on wartime tactics and elevated rhetoric, with promises of grand emergency measures, to try to keep things under control. One might have thought that, given the world’s population of around 6.8 billion, that 20,000 deaths per year from coronavirus does not constitute a major threat. But that’s not the case here.

It turns out the national guard in six states so far has been activated to fight the coronavirus, though, as a friend has remarked to me, it’s not really obvious how body armor and helmets are going to assist in coping with something that appears to be causing far fewer deaths per year than the common flu. Which, of course, only reinforces the conclusion that this is really a POLITICAL PANDEMIC and not a MEDICAL. So what’s really going on here?

Something called “The Hegelian Dialectic” posits that governments, confronting problems, devise solutions that benefit their long-term agendas. Once in a while, they make observations that leave clues as to what is really going on, as in the case of Henry Kissinger (above), who suggests that vaccines can be used to control the population, including by having varieties that can kill and others mentally incapacitate and such. Think about it.

Jim Fetzer, a former Marine Corps officer, is McKnight Professor Emeritus on the Duluth Campus of the University of Minnesota and co-founder (with Mike Palecek) of moonrockbooks.com. Special thanks to Mona Alexis Pressley for links to fungus research.