First, read this transcript of a vaccine injury complaint telcon, then call your own doctor or pharmacist! (Audio) 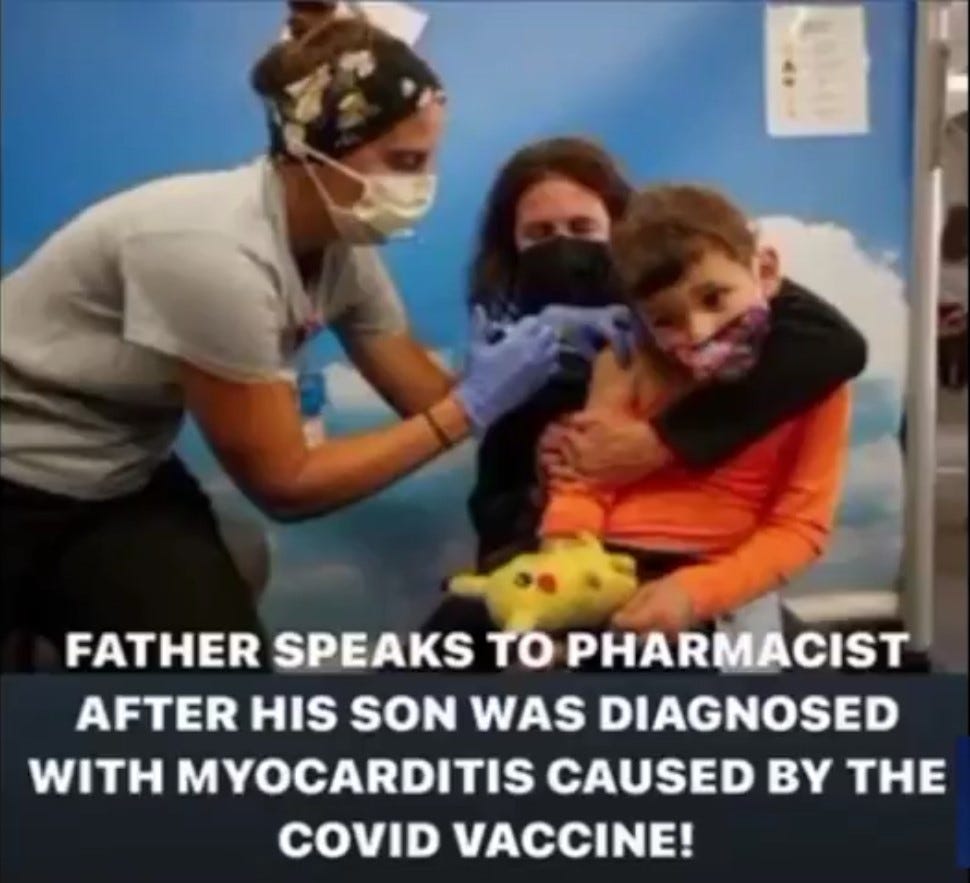 I’m not sure who made this call, but it’s being passed around via BitChute and I thought it would be helpful to have a transcript written out…so I took some time to put it together. Sometimes the conversation overlaps, but I did my best to make it read well. The pharmacist is in italics.

Note: This story really broke my heart. The father is rightfully furious and the pharmacist he is speaking to is barely articulate. She doesn’t show an ounce of genuine concern for the man and his son who is in the hospital. I don’t blame the dad for finally losing it and calling her names at the end. (Cut him some slack.)

I’m also struck by how the ignorant pharmacist spews the false talking point about how the “benefits outweigh the risks” for the covid vaccine. Not with kids, it most certainly does not. (Check out the post I did last November with some data.)

Yeah, hi, are you a pharmacist?

Yes. How can I help?

Yeah. Hey, I’ve got a question. My wife, um, against my wishes, brought my son, 7-year-old son, in there yesterday, er sorry, a few days ago for a covid jab. And he’s now in the hospital with myocarditis. And I was obviously not very happy with you guys or with my wife. She told me that she was not told that was a potential side effect. So why wouldn’t you have told her that?

OK, um, sorry. So it’s quite a rare side effect as well, aah…

No, it’s not because I’ve been doing research. It’s common in the US, there’s tens of thousands of them reported to the CDC site. So why are you not telling parents this?

Um, ah, we might scare the parents and they don’t want to get their child vaccinated.

What is wrong with you? You don’t want to scare them. I’m recording this conversation as well, and this is going through a lawyer next. Thank you for admitting that.

So why don’t you tell them? When someone comes in there it says, “Hey, what can go wrong?” What do you say, “Sore arm?” Have you seen the amount of dead people? Have you seen it?

Has your wife asked before giving consent to give…?

She asked what the side effects are.

Does she ask? I’m not sure because I wasn’t there.

It doesn’t matter. You are supposed to tell people. This can happen. Now, my kid. So you know what the prognosis is? You know what it is? Possible death within five years. Twenty percent of people with myocarditis die. It is a permanent damaged heart. It is not temporary. He’s facing a heart transplant…

OK, I’m so sorry about that.

…because of you! Because you didn’t wanna scare her! You know, no kids have died from covid not a single healthy kid. And you’re giving this stuff out and you’re not warning people. What is wrong with you?

No, no (have you talked to the helpline?) you gave the shot. No. You gave the shot. When someone comes in there and asks what the side effects are, you don’t not say, because it might scare them from the shot… What is wrong with you?

No, there isn’t! Do you know I’m looking at a Johns Hopkins study…not…there have been 400 people under 18 die in United States, 330 million people. Not one of them was healthy. They had cancer, leukemia, obesity. Something wrong with them. Not one kid has died or ended up in the hospital. So the benefits are zero to my kid.

Why did you not tell them? It’s up to you to tell them. Then we make a decision, not you. You tell us, “OK, it’s rare, but it happens.”

You didn’t tell her that, did you? You just admitted it.

I’m not sure I wasn’t the vaccinator.

Whoever, you said you’re not doing it. So when the next kid walks in there with a mother for a shot, are you gonna tell them, “Hey, I just got a call from someone their kid’s heart is destroyed. Keep that in mind that can happen.” Are you gonna tell them that? Are you?

I cannot answer you that at the moment.

Well, why can’t you ‘cause it’s gonna go on a court and you’ll answer it? You just admitted that you don’t tell people because you don’t wanna scare them. It’s recorded, I’ve recorded everything.

No, I’m not sure…Sorry, I wasn’t the pharmacist that does the vaccination…

I don’t know what the situation is.

So I don’t know what she talked in the vaccination area. I’m not sure. I cannot speak.

You just told me. No. Don’t try and pull it back…

I cannot speak (No!) on behalf of who, the pharmacist that vaccinated.

You just told me you don’t tell people because you might scare them. I have it on a recording, you wanted me to play it back? Every call I make because I’m in finance, every call I make is recorded. Every e-mail I sent is recorded. Every message I sent must be recorded ‘cause I work out of New York and I live in New Zealand. It’s all recorded because of the, the SFC1 requires it. You are recorded.

Why (Sorry…) so you’re telling people (I don’t know) you’re not telling them they could get damaged, so in case you scare them from taking a shot that can kill them, right? Is that correct? Are you brain dead? What is wrong with you?

Sorry, I don’t think we should converse, continue this conversation.

No, we should, because are you gonna tell people this is a risk when they come through there? My kid’s screwed. You screwed him. What about everyone else? What are you gonna do? You’ve ruined a life. It’s on your…it’s on you for the rest of your life. This kid is screwed because of you, because your policy there is to not tell people that these vaccines are dangerous and deadly.

So what are you gonna do? Are you gonna tell parents or are you gonna say, “Look, this is what can happen, it’s not a sore shoulder…that’s usual…but they can ruin their lives.”

Umm, that’s not what…the decision that I make.

It isn’t? So you’re just going to tell people, “Oh nothing can go wrong” and more kids are going to end up in the hospital with ruined hearts, right? That’s the plan? ‘Cause you can’t make that decision, and you’d hate for them not to take the shot, eh, ‘cause then you don’t get your 50 bucks, do you?

Yeah but you don’t tell them what can go wrong! Of course you ask consent. The parent came there with that kid, it’s obvious consent. Why are you not telling them what can go wrong? I’m sure they’re asking, but you’re like, “Oh no, nothing goes wrong. Just a sore shoulder, right?” You don’t tell him that the crazy guy called you and said his kid’s life is ruined because of what you did a few days ago. Do you or will you?

CLICK HERE to listen to the recorded conversation: https://wholistic.substack.com/p/father-reams-pharmacist-after-son#details