What in God’s name? Pope Francis plans to ‘fix’ global capitalism – with the help of the Rothschilds, Rockerfellers and Mastercard 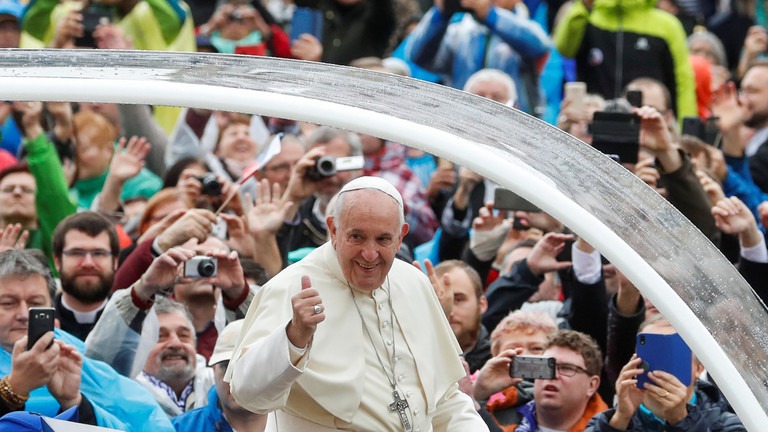 FILE PHOTO: Pope Francis gestures as he arrives for the weekly general audience at the Vatican, November 13, 2019 © REUTERS/Remo Casilli

The Vatican has said it will partner with Fortune 500 companies to address various economic grievances, including inequality and environmental degradation. But is it really incumbent upon the Bishop of Rome to virtue-signal?

Anyone entertaining hopes that planet Earth might escape the insanity of 2020 without any more mind-blowing stories may wish to fasten their seatbelts for a hard landing.

At a time when a global pandemic has swept away millions of jobs, and transformed a handful of global capitalists from ‘merely wealthy’ to fantastically wealthy overnight, Pope Francis has decided to take sides in this epic battle. Any hunches what side that might be? Hint: much like the Vatican, it is immensely wealthy, influential, and acts like a government unto itself.

Yes, you guessed it. Instead of the poor and destitute – you know, ‘the meek who shall inherit the earth’ rigmarole – taking their rightful place alongside the Pope to fight against globalization on steroids, the Vatican has announced it will form a “historic partnership” with big business, known as the Council for Inclusive Capitalism. You can’t make this stuff up. And make no mistake: this is no mere talk shop, but rather a vast undertaking that involves“more than $10.5 trillion in assets under management, companies with over $2.1 trillion of market capitalization, and 200 million workers in more than 163 countries.”

“Capitalism has created enormous global prosperity, but it has also left too many people behind, led to the degradation of our planet, and is not widely trusted in society,” said Lady Lynn Forester de Rothschild, Founder of the Council and Managing Partner of Inclusive Capital Partners. “This council will follow the warning from Pope Francis to listen to ‘the cry of the Earth and the cry of the poor’ and answer society’s demands for a more equitable and sustainable model of growth.”

In other words, in an apparent act of divine intervention, the Rothschild family (whose wealth is estimated at $20 billion, although nobody really knows for sure), together with other famous brand names of globalization, such as the Rockefellers and Mastercard, will now take up the standard for the world’s downtrodden. Who will be the first one to hold their breath?

I tried to contain my skepticism, I really did, until I read a bit deeper into this contract between the Catholic Church and corporate power. Any guesses as to who will ensure the corporate chieftains live up to their end of the bargain?

Known as the Guardians for Inclusive Capitalism – I kid you not – these 27 devout and morally outstanding individuals all hail from the golden one percent. Let’s call them the Pope’s 27 billionaire disciples. Really outstanding people, such as President of the Rockefeller Foundation Rajiv Shah, CEO of Mastercard Ajay Banga, and CEO of Salesforce Marc Benioff, will now behave like Good Samaritans, carrying out the will of the Holy See around a ravaged, lockdown-wearied planet. And here is the catch: there is not a single Vatican cardinal or even a deacon on the list of Guardians. So, who will guard over the guardians? Yes, the corporate elite themselves! They must have read Donald Trump’s ‘The Art of the Deal’.

My initial skepticism shot into overdrive when it became clear what acts of charity the council would promote: “The Guardians will hold themselves accountable, committing to a list of intended actions involving environmental, social and governance matters,” Forbes reported. “The Guardians … have said they plan to hire and promote more women, increase diversity hires, commit to clean energy by purchasing 100% renewable electricity, reduce greenhouse gas emissions…” Yada, yada, yada.

Forgive me, Father, but that sounds an awful lot like the controversial progressive platform being touted by Joe Biden and Kamala Harris that has divided the United States down the middle. In other words, this unholy marriage has already alienated at least one half of the US population, who fear a Biden presidency will herald in an age of socialism in America. Meanwhile, it is hardly reassuring that these profit-driven individuals will be allowed to “hold themselves accountable” to take on unspecified “social and governance matters” and “other initiatives,” whatever those happen to be.

The reason for suspicion should be obvious. Aside from the absurdity of letting profit-driven corporations play guardian over themselves, we are now living in a time when these out-of-control behemoths are no longer content to just hawk their products to consumers; they have taken a serious stand on cultural and political issues, which many people find unacceptable yet must bear silently with a smile.

Using their profits from consumer spending, corporations such as Coca-Cola can run an extremely controversial Sprite advertisement campaign, for example, that promotes a transgender lifestyle and that will be seen by millions of impressionable children. Or how about Gillette’s massively disappointing (and disliked) commercial that took issue with so-called ‘toxic masculinity.’ Are these the “other initiatives” that corporations will be forcing on an unsuspecting public with the stamp of papal authority? Personally, I’ve never heard Pope Francis speak out against these extremely provocative ideas.

Perhaps even more worrying is that many companies, compelled to prove they are taking a stand on behalf of the latest cause célèbre, have enthusiastically jumped aboard the Black Lives Matter juggernaut, which critics – of which there is no shortage, even among the black American population – say works to the disadvantage of other races, not least white Americans, who have become the bane of Western civilization overnight.

Is this the sort of ‘equality’ big business will be promoting with the quiet blessing of the Vatican? In their woke bid to become more ‘equal and diverse,’ will corporations begin to promote particular groups of people at the expense of others? After all, the Trump administration was just forced to take executive action against ‘critical race theory’ inside the government, while academia is now rampant with lectures teaching the evils of the ignoble white man. Are we on the precipice of a new age of racism in the United States and elsewhere, where the historic tables are turned with the help of corporate America?

Although Pope Francis may have the best intentions at heart in promoting this sort of dialogue between the Vatican and the corporate world, unless there is real involvement by the Church to rein in corporate power, it will become a wasted opportunity in very short order.

The Council for Inclusive Capitalism is nothing more and nothing less than a cynical PR stunt for corporate power that allows their controversial initiatives, heavily steeped in the rapacious accumulation of profit, as well as the promotion of dangerous ‘woke’ values, to win the seal of approval from one of the most powerful religious authorities on the planet.

Such a program really amounts to an act of mindless virtue-signaling from the Catholic Church, which has fallen out of favor of late, and a cheap opportunity for the corporate world to conceal its behavior behind the shroud of morality and saintliness. It would have been far more effective and symbolic had Pope Francis committed himself to a contract with the people, with his true followers, in the fight against corporate power. Instead, he made a pact with the devil.