Since Nancy Pelosi is so Intent on Harming our President, I’d like to expose some FBI Files on Pelosi’s family: Her father was a Communist, and her brother was arrested for Gang-raping two girls . . . there’s more 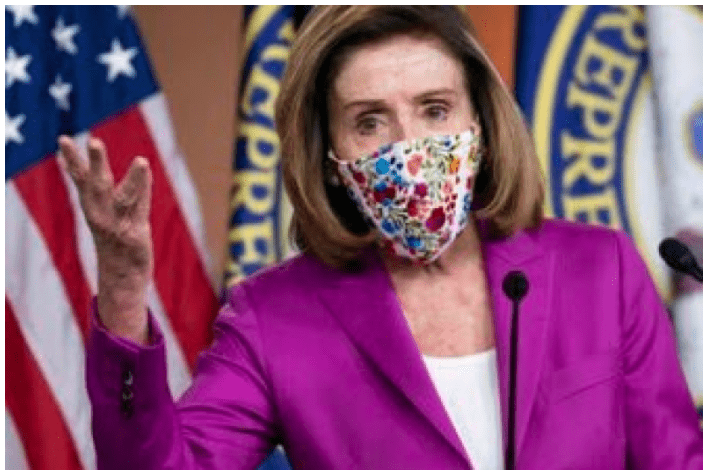 FBI files are something can contain a treasure trove of information; the kind of stuff that would be very inconvenient if it came out while a person was in a position of public trust, like Speaker of the House, Nancy Pelosi.

Now, most of my web site readers and radio show listeners know that I worked with the FBI from 1993 to 2008.  My final five years I worked with the Joint Terrorism Task Force (JTTF).  All this came out when the Obama regime betrayed me and arrested me for writing an Editorial they didn’t like.

When they did that, in June, 2009, I became only the second American media guy in HISTORY, to be arrested for writing an Editorial.  The first guy who suffered that fate was Benjamin Franklin Bache, grandson of Ben Franklin, who wrote an Editorial opposing the Alien and Sedition Act.  He died in prison awaiting trial.  I didn’t.

The three Appeals Court Judges in Chicago wrote that the Supreme Court’s decision in “Heller” applied to Washington, DC, because that was a “federal city.”  But because Chicago was a creation of the state, the Second Amendment did not apply there!

Needless to say, when I penned an Editorial on this web site, expressing outrage at what these rogue Judges had done, it was strongly worded . . . about 2500 words worth! The last time I looked, Chicago was part of the United States, and our Constitution makes clear it is “the supreme law of the land” meaning Chicago too!

Long story short, I described the Appeals Court judges as “Traitors to the constitution” and said that one of our Founding Fathers, Thomas Jefferson, told us what we should do with such men.  In his “Tree of Liberty” letter, Jefferson wrote, “The tree of liberty must be replenished from time to time with the blood of tyrants and patriots.”  Then I wrote “Let me be the first to say this plainly, these judges deserve to be killed.  Their blood would replenish the tree of liberty, a small price to pay to assure freedom for millions.”

About fourteen days later, fifteen FBI agents came through my front door.  They showed me printouts of my web site and asked “Is this your web site?”  Yes.  Did you write this?  Yes.

I was ordered held without bail as a “danger to the community” because of my words.  I went on trial THREE times.  The first in December, 2009, which resulted in a Hung Jury, nine voted Not guilty.

The second trial took place in March, 2010, and they brought the three judges in to testify against me.  First time in US History that three sitting federal judges ever testified against someone.  HUNG JURY AGAIN!  Ten voted Not guilty.

By this time, I was broke and filed Bankruptcy.  I couldn’t afford my lawyers and was appointed a federal defender.  What a mistake.  I would have done better had I defended myself.  I was put on trial an astonishing THIRD time in August, 2010 – the only other people they do three trials for, are mafia bosses — and I was convicted;  33 months in federal prison.

This happened under the Obama regime for writing an Editorial where no one got hurt, no one got killed, no property was damaged, destroyed or stolen, and no one lost any money.   I was sent to prison for 33 months for a “crime” where absolutely NOTHING happened to anyone or anything.  A strange thing to happen in a country whose Constitution protects free speech and freedom of the press.

This is what you get when DEMOCRATS are in charge, and now, it looks like Joe Biden is coming in.  Trust and believe when I tell you, expect him to literally throw the Constitution in the trash.  Our “rights” . . .  don’t exist under Democrats. They threw ME in prison for MY opinion; they will throw YOU in prison for yours.  I know, first-hand.

And they didn’t just send me to any prison, I went to terrorist prison: FCI Terre Haute, Indiana.  The Communications Management Unit (CMU) which is the most-secret prison in the entire US federal system.

I tell you all that because during my trials, it came out in court that I worked with the FBI covertly.  National Security Intelligence, Terrorism, Foreign Counter-Intelligence. Alex Jones reported about it on his PrisonPlanet TV show.   Just watch the first 90 seconds and you’ll understand what I did for the FBI:

I was a Level 5 Intelligence asset.  I was authorized by the Office of Intelligence at FBI Headquarters in Washington, DC for  Fully operational extra-territorial work.  I was one of a very few FBI assets authorized to work outside the United States.  Usually, that’s done by CIA guys, not FBI.  So when I worked overseas, my work had to be coordinated with CIA, but I didn’t work for CIA.

In the work I did for FBI, I got to meet others in the Intelligence community around the world.  Some in Military, some in Law Enforcement and some in actual Intelligence agencies of other nations.  I developed relationships with those people; relationships I maintain to this very day.  They feed me intelligence info that the mass media never gets near, and some of it, I can feed to you.

The report deals with the father and brother of Speaker of the House, Nancy Pelosi.  Her father was Thomas D’Allesandro, a former US Congressman, and Mayor of Baltimore, MD.

Turns out, Pelosi’s dad, was a filthy COMMUNIST!  He was with “American Committee for the Protection of the Foreign Born, American-Soviet Friendship.”

Gee, might that make Nancy Pelosi comfortable dealing with Communist China?  Fellow travelers to her own Dad!  I think it makes the woman a national security risk.  If she’s all cozy-with-Commies, who knows what she’s capable of?

Pelosi’s father also had ties to at least two other Communist groups and had documented close ties with mobsters in Baltimore, who were allegedly involved in gambling, and multiple MURDERS.

And her brother, Franklin Roosevelt D’Alessadro, was arrested and charged at age 20, with being one of FOURTEEN guys who gang raped two girls, ages 11 and 13.

Where’s the whole “woke” left-wing demanding Pelosi denounce what her brother was accused of doing or that her father used his position as a then U.S. Congressman to get the kid off?  Why aren’t left-wingers outraged that the sister of an accused gang rapist is Speaker of the House?  Or is gang rape OK if you’re a left-winger?

And who the hell does Nancy Pelosi think she is trying to Impeach a President for “Incitement” when the legal facts do not even provide probable cause for such a criminal charge?  This woman is out of control and now, it’s time she feel a little public scorn over HER background!  Oh, I almost forgot; there’s more.  Much more.

The worst part?   President Kennedy, having been fully briefed about Pelosi’s father, APPOINTED HIM anyway to a federal post.  Here’s the newspaper story outlining it, also from FBI files: 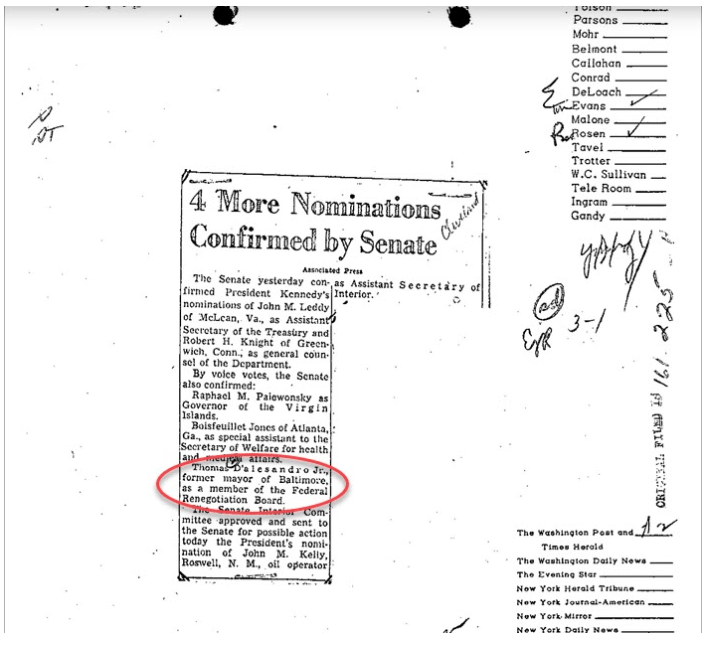 Did you read that he was APPROVED BY THE US SENATE?

This gives you a good idea of exactly what the Democrat Party is about . . . and has been about for fifty years!  THUGS.  Most of them!   Really dubious THUGS, too!

And it also gives you a good idea about the kind of human garbage that exists in allegedly august bodies like the US Senate.  MORE THUGS!  They knew this stuff, and approved the guy anyway!

So when you hear people like Pelosi and fellow Democrats howling about President Trump, just remember who they actually are.

And when you hear or see a US Senator moaning and groaning about President Trump, remember what THEY are too – a lot of of human trash.

That’s why they HATE Trump so much.  He’s got no dirt.  He’s not human shit like most of them are.  They simply HAVE to destroy him because he is good and they are . . .  well . . . . mostly shitbags.

They hate him because he’s better than them and they will use whatever lies, manipulation, deceit or crime they must, to get rid of him.  That’s why they stole the election and that’s why they’re trying to Impeach the guy now.  They are political garbage and he is not.

FAR WORSE, what the FBI report above shows, is that COMMUNISTS have been infiltrating our government since the 1940’s.  Now their kids like Pelosi, are in positions of high power in government.    We as a nation are in far greater danger than we ever realized.

Pelosi is a National Security risk who has to go.  Want proof? Wait until you find out what was on the laptop computer which was (ahem) “stolen” from Pelosi’s office last Wednesday during the protests at the US Capitol:  Emails.  Many, MANY, emails.  With a certain head of a certain foreign state.

Yes, she’s cozy-with-commies alright.  And she has been working with one of the worst for a very long time, to the detriment of our nation.

That’s another reason she’s so adamant about getting Trump out RIGHT NOW — she knows what was on that laptop and she wants Trump out so it won’t get exposed.  Too late, darling. Far far too late.

I, for one, have grown tired of the political garbage. They try to hold themselves out as honorable people when the truth is something far different.

I, for one, have just begun exposing these shitbags for what they truly are.