The “Conclusions” posted below were taken from a scientific research paper titled:

Is there a Link between 5G Internet Frequencies and the Corona Virus? Matters of Discussion

After China got control over the spread of the coronavirus, two countries which responded differently to the coronavirus epidemic are Italy and South Korea so it is worth taking a look as to why one country has few deaths while the other has many. South Korea was under siege from the virus right after China but they quickly jumped on testing their population. As of March 15th, South Korea had tested 248,000 people and confirmed 8,162 cases and 73 deaths by this date.40 This is a fatality rate of .009% or 1 out of 112 South Koreans testing positive for the coronavirus died. No “shelter-n-place” orders were given. A week later, according to the John Hopkins website, as of 22 March South Korea had 8,897 confirmed cases of coronavirus and 104 deaths representing a death rate of .0117% or 1 out of 85 people dying who had the virus. 2,909 South Koreans have recovered from the virus. Italy on the other hand is a different story. As of the same March 22 date, Italy had 59,138 cases of infection and 5,476 deaths representing a death rate of .93% or 1 out of every 11 people testing positive have died. What are the differences between these two countries? The outbreak started in the north of Italy in the Lombardy Province which has Switzerland on its northern border. The principal city is Milan. Northern Italy has one of the oldest populations and the worst air quality in Europe which had already increased the number of respiratory diseases. From the statistics provided from a Swiss medical doctor and the Italian ISS of 2,003 patients who died, the average age of the positive tested deceased in Italy is currently about 81 years. 1,425 deaths representing 71% of all Italian coronavirus deaths came out of the Lombardy Province.41 Of the 2,003 total deaths, 1,757 of the deceased, = 87.7%, were over 70 years old with 1,224 (69.7%) being men. 80% of the deceased had suffered from two or more chronic diseases mainly from cardiovascular and respiratory problems, diabetes and cancer. Less than 1% of the deceased were healthy persons with no pre-existing chronic diseases. 30% of the deceased were women. From these Italian statistics, it is clear that the older population with pre-existing conditions which eventually will lead to their death, are at the highest risk of death once they contract the coronavirus. Men are more than twice as vulnerable than women.

Read the entire paper at: https://www.researchgate.net/publication/340166697_Is_there_a_Link_between_5G_Internet_Frequencies_and_the_Corona_Virus_Matters_of_Discussion

*Screenshots of “Conclusions” posted below: 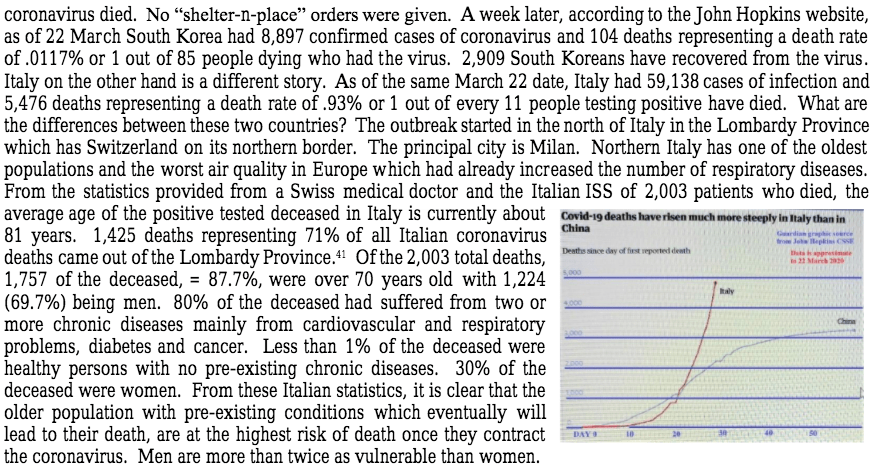