The Peerless Rudolf Steiner Predicted a Supreme Reign of Satan 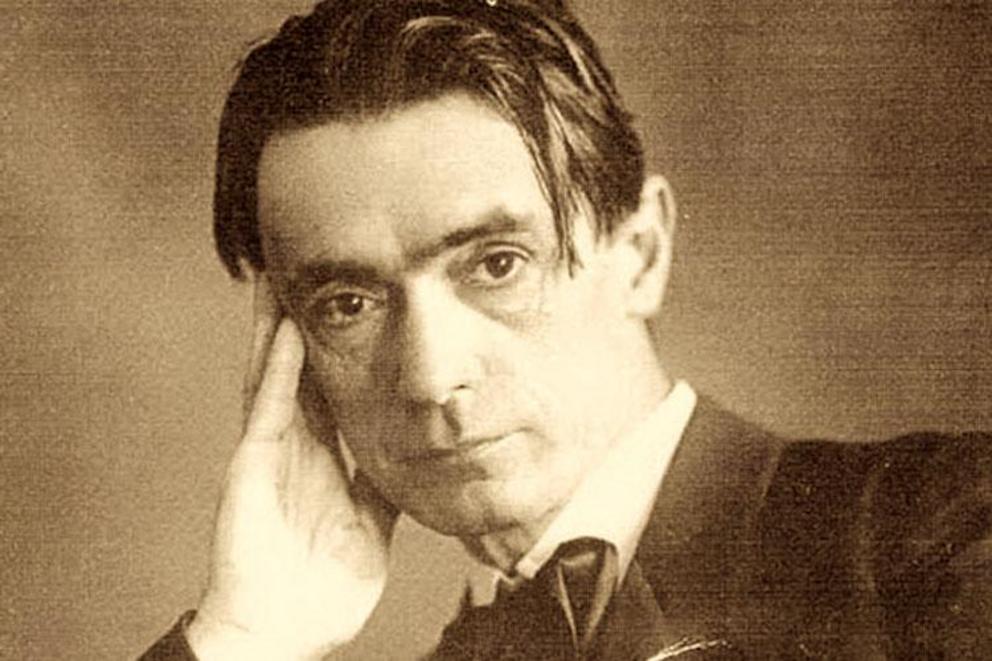 The initiated clairvoyant (clear seer) Rudolf Steiner (1861-1925) foresaw “Satan’s Embodiment on Earth Around Year 2000.” A seer can enter the non-physical worlds and see what is called the realm of real causes. He could switch off his five senses and see into other real dimensions, often referred to as the spiritual worlds or heaven.
by Pete

(henrymakow.com)
Rudolf Steiner gave 6,000 lectures and wrote 30 books. He started a non-chemical (i.e. safe) agricultural system called bio-dynamics and created a education system that awakened the human heart (emotional intelligence) rather than bypass its development, which is the norm.
Steiner pointed out that Satan whom he called Ahriman, not to be confused with Lucifer, is the spirit who inspires the deadening of everything living, (artificial everything.) His aim to prevent man’s proper evolution. 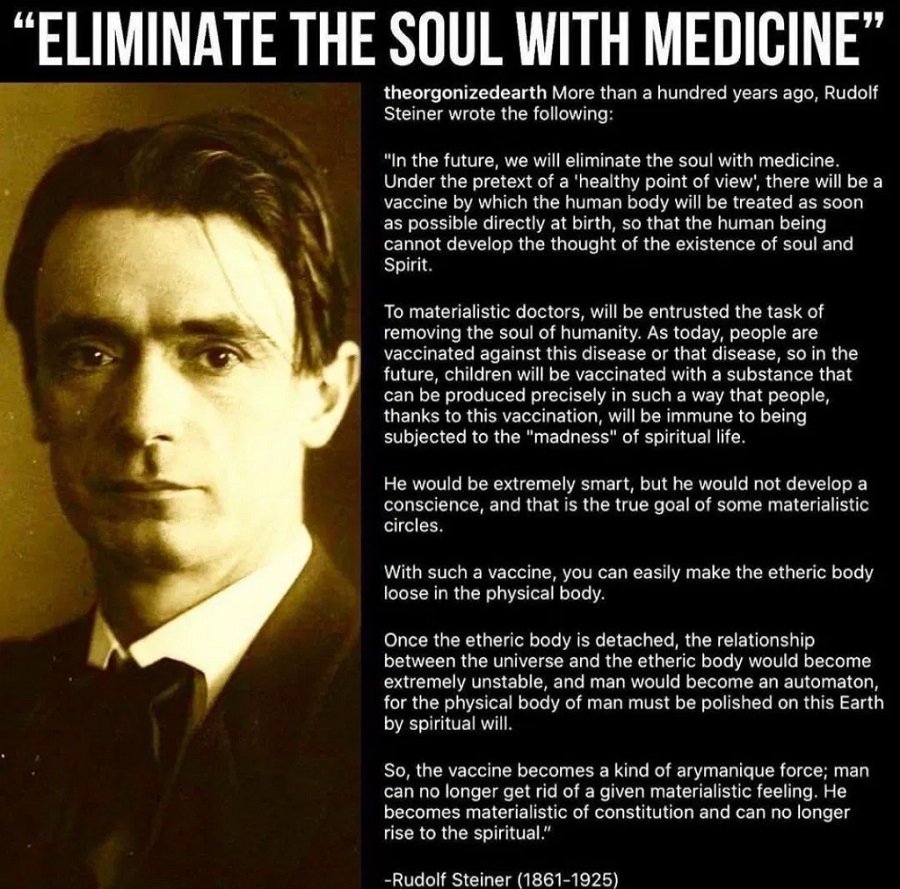 Ahriman inspired materialism, technology, especially electrical (all media uses electricity) which are aspects of the dead mineral realm. The word mineral means small rocks, rocks are lifeless. Evil is “live” spelled backwards, hence the notion of anti-life or anti-Christ.
Steiner called Satan or Ahriman the arch deceiver, a being who lies, uses language distortion, mind tricks, false flags and fakery of all kinds to achieve his aims. He is an intellect on steroids.

Aren’t our times chock-block full of lies promoted by electrical media as truth 24/7. Steiner also said that Ahriman would even inspire a vaccine that would make it very difficult for people to even think that there may be an intelligent invisible realm beyond the five senses.

As well Steiner saw that that Satan and his helpers had been whispering into the heads of scientists since the 1800’s. Many scientists have been unconsciously preparing for Satan’s first ever incarnation into a flesh body.

Due to his dazzling heartless intellect, Satan will impress i.e. deceive most human beings who have been seduced into trusting that the limited human intellect can solve all problems, without Heaven’s help. Ahriman may even pass himself off as Christ, as the saviour returned. He achieves his goals by fracturing wholes into as many confusing fragments or pieces as possible. (order out of chaos, divide and conquer) think political correctness.

Our current world and human body is awash with harmful chemicals created by very proud limited human intellects in the world’s laboratories. The earths and the human being’s (God given) immune system is being sneakily  replaced by expensive pharmaceutical concoctions in agriculture, animal and human medicine. Sickness is damn good for repeat business.

The chemical business was started by I.G  Farben in Germany and taken over by oil magnate Rockefeller after the war. Thus side effects abound everywhere. Pandemics are brilliant money earners for the pill makers especially when Governments requisition sales using tax money and police power.

Ahriman aims to dumb down human thinking, the key to freedom  and induce fear everywhere, a paralyzing feeling, so as to turn all humans into compliant robots. Lifeless chemical food, vaccines from birth and a host of screen addictions which thwart the
development of the capacity to imagine amd to reflect on life’s meaningful experiences are also used.

Through scientists like Darwin, Ahriman convinced most people on earth that they are just evolved animals, that existence has no intrinsic meaning, that they are only a body, that it is impossible to function consciously without the 5 senses and that there is no consciousness after the human physical body dies. He turns all things up side down i.e. war is peace, using his dazzling impressive intellect. He just keeps repeating his lies until everyone trusts them.

His incarnation on earth was so real for Steiner that he devoted his whole life to describing what he saw and experienced in non physical or spiritual dimensions, with the aim to protect humanity from suffering, the kind of suffering that is now everywhere on this earth, a consequence of lies repeatedly told by elite controlled governments and media. Steiner’s body died just 100 years ago.

“I am with you always, ask and it will be given” uttered Christ, a God being whom Steiner said will only incarnate once on earth. However, he is available for any human who strives to make contact. “Let your thinking be in questions”, suggested Steiner. The collection of Steiner’s “spirit sight” is called Anthroposophy. This quote is from a lecture titled “behind the scenes of external happenings” available here.

“Constant references to the universal Spirit, all the talk about inner, spiritual deepening and the like, none of it leads anywhere. What is essential is that mankind of the present time shall establish real and concrete relations with the spiritual world.

Intimate and penetrating knowledge of these things is the only means whereby the aims of the Spirits of Darkness may be counteracted. Certain occult (hidden) brotherhoods, however, make it their business to work in exactly the opposite sense. They want to retain the wisdom exclusively within their own narrow circles, in order to exploit it in connection with their lusts for power. We are living in the midst of this struggle.”

But what hope is there for us if we automatically think after years of head filling via forced education and 24/7 media, that no such thing as a spiritual dimension alive with profoundly wise beings could possibly exist. That means that Ahriman will be successful.

—-
First Comment by RF-
Saw this latest article published on your site, for your information Steiner was part of the conspiracy and can’t be trusted.
https://www.henrymakow.com/2022/05/rudolf-steiner-predicted-reign.html

Though no one knows exactly when or how Steiner came into Freemasonry, in 1906 Steiner became the Master of Mystica Aeterna Lodge, a part of the order of Memphis and Mizraim, which traces its lineage back to Cagliostro and the great alchemists of the late renaissance. He would write heavily about Freemasonry, its connection to the mystical symbols of the Rosicrucians, and the whole of Esoteric philosophy. Though all Masonic Lodges in Germany would be closed in 1914 at the outbreak of World War I, Steiner continued to be influenced by Freemasonry throughout the entirety of his life and writings.

https://www.universalfreemasonry.org/en/famous-freemasons/rudolf-steiner
“Intimate and penetrating knowledge of these things is the only means whereby the aims of the Spirits of Darkness may be counteracted. Certain occult (hidden) brotherhoods, however, make it their business to work in exactly the opposite sense. They want to retain the wisdom exclusively within their own narrow circles, in order to exploit it in connection with their lusts for power. We are living in the midst of this struggle.“
Related-  Documentaries about Rudolf Steiner

In this early cycle of lectures, Steiner unlocks with spiritual fire and insight the profound mysteries in the Book of Revelation. He shows that the Apocalypse of St. John with its picture-language can help us decipher the book of destiny.