Even the DoD vehemently opposes 5G as it threatens national security…so they say! 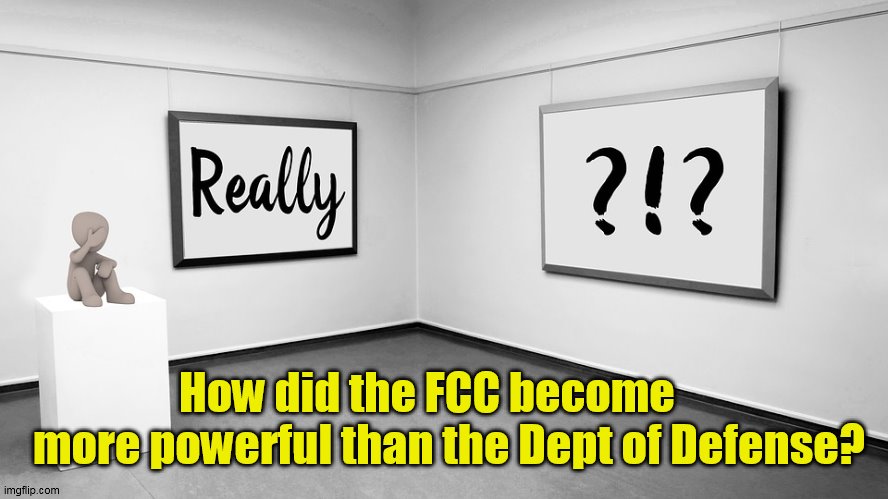 The Federal Communication Commission (FCC) is supposed to protect the public by regulating the telecom industry.  They have a LONG history of being a corrupt and “captured” agency and they have become brazenly more dangerous during the Trump administration.  This includes ignoring 5G warnings and opposition from a growing list of experts including the Department of Defense (see 1, 2, 3, 4) who has been saying since LAST YEAR that 5G is a HUGE threat to national security.  Some Congress members have finally stepped in and now there’s going to be a hearing.

As senators reconvene on the Hill, the Armed Services Committee will hold an in-person hearing tomorrow, May 6th, to discuss Ligado’s contentious 5G plan which the FCC approved despite the Pentagon’s concerns that the service could disrupt the nation’s GPS signals.

Chairman of the Armed Services Committee, Jim Inhofe (R-Okla.), said last month, “When people try to push bad policy through in the middle of a crisis, without much coordination with seemingly anyone else, it makes me wonder about their motives.”

The FCC and Ligado will likely not be testifying as both parties deny that GIS disturbances would arise from Ligado’s planned network.

To view the agenda for tomorrow’s hearing, click here.

The FCC is actually using the pandemic as an excuse to speed up 5G installation (see 1, 2. 3, 4, 5).  This includes launching tens of thousands of satellites with millions of antennas to blast 5G and WiFi at us from space (see 1, 2, 3).  Lawsuits have been filed against them for NOT protecting Americans from unsafe levels of radiation (see 1, 2) and 5G (see 1. 2, 3).

Somebody drain this damn swamp already.