Check out The Weather Channel to see how the geoengineers are stealthily manipulating NICOLE into a highly destructive superstorm. 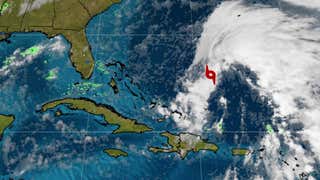 Sign up for the Morning Brief email newsletter to get weekday updates from The Weather Channel and our meteorologists.

A​ tropical or subtropical storm will likely develop in the Atlantic Ocean and push toward the Bahamas, Florida and the Southeast this week. Strong winds, high surf, rip currents, coastal flooding, beach erosion and heavy rain are expected along parts of the Eastern Seaboard.

An area of low pressure is producing showers and thunderstorms near Puerto Rico, the Virgin Islands, the Lesser Antilles and the southwestern Atlantic Ocean.

W​ith a still-adequate supply of deep, warm ocean water, this area of low pressure is likely to organize into either a subtropical or tropical storm sometime early this week. This prompted the National Hurricane Center (NHC) to circle this area for potential development (labeled “Disturbance #1” on the map below).

A​ separate disturbance east of Bermuda, Invest 97L, has also been highlighted by the NHC (labeled “Disturbance #2” on the map below). It’s likely to be short-lived and will merge with a cold front and be pulled northeast well away from the U.S.

“Nicole” and “Owen” would be the names given to the next Atlantic named storms.

S​outheast Coast: What to Expect

F​or the next couple of days, gusty winds can be expectd in the Bahamas and along the Southeast U.S. coast. These persistent winds will drive some high surf and rip currents along the beaches from the Virginia Tidewater to eastern Florida.

After drifting north the next day or so, we expect this low to make a westward turn toward the northwestern Bahamas, then Florida around Wednesday or Thursday.

Right now, it’s unclear how long this windy, rainy weather will last in the Southeast, and to what degree and when it may spread up the Eastern Seaboard later next week.

The graphic below shows typical origin locations (in yellow) and tracks of November tropical storms and hurricanes.

T​he Bermuda Triangle is one area prone to development in November.

But the storm motion is often toward the northeast, into the North Atlantic Ocean away from the Southeast U.S.

That’s usually because an increasingly strong, southward-plunging jet stream eventually takes a tropical cyclone from near the Bahamas and pushes it well out to sea.

So, why is this low tracking toward Florida or the Southeast? B​lame it on an atmospheric logjam.

A dome of h​igh pressure off the coasts of New England and Atlantic Canada will divert the jet stream away from the western Atlantic Ocean.

T​hat blocking high won’t allow the low to escape to the open Atlantic Ocean, but will trap it, then steer it generally toward the west-northwest.

Y​ou may also be curious why it might be called a “subtropical” depression or storm.

Tropical storms and hurricanes have warm air vertically through their circulations. However, lows that are attached to cold and warm fronts are cold aloft.

A subtropical depression or storm is a mix of those two types of low-pressure systems.

(IN DEPTH: Subtropical vs. Tropical Cyclones)

The Weather Company’s primary journalistic mission is to report on breaking weather news, the environment and the importance of science to our lives. This story does not necessarily represent the position of our parent company, IBM.