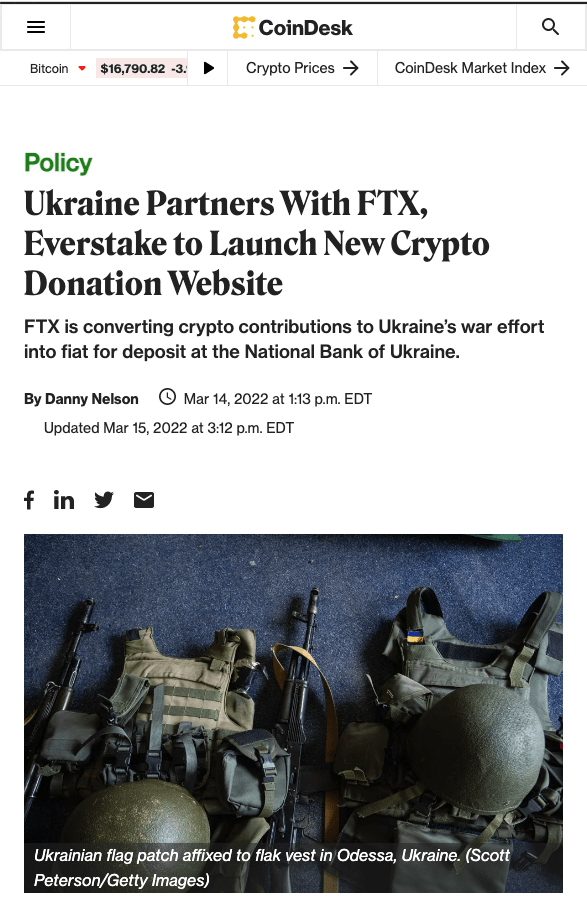 The sudden collapse of crypto exchange “FTX” and its Bankruptcy filing today, has revealed that FTX presently suffers from $10-$50 BILLION in liabilities with almost ZERO assets . . . and among those liabilities, are “investments” made by . . . . UKRAINE . . . .

At this early hour, it __appears__ that tens-of-billions in American “Military Aid” to Ukraine, which was allegedly to be used to fight Russia, was cash that Ukraine DID NOT use to fight Russia, but instead invested into FTX!

Yes, you read that correctly: Instead of using US Military Aid to fight Russia, Ukraine “invested” part or all of it, into FTX, and right now, it looks like all the money is gone.

Also at this early hour, it now also __appears__ that the Chief of FTX, Sam Bankman-Fried, was the #2 donor to the Democrats. He was only outspent by Soros himself!

It __seems__ Ukraine was receiving money from the US, Ukraine sent it to FTX, and FTX sent it to Democrats, who originally voted to send it to Ukraine.  At this hour, it __appears__ to some observers, to be pure, criminal, money-laundering, and a criminal conspiracy to violate campaign finance laws.

It now seems to closely-watching observers that the kid (Bankman-Fried) burned his own company — and his own ass — just to make sure the Dems won the mid-term elections, and seems to have done it by pulling the rug out from all those that had funds there in FTX.

So the collapse of FTX is now linked not only to Ukraine, but also to US Democrat politicians who got money from Sam Bankman-Fried, to campaign for the just-ended elections!

From wiki
Sam Bankman-Fried was born in 1992 on the campus of Stanford University into a family of academics. Born and raised to an upper-middle-class Jewish family in California, he is the son of Barbara Fried and Joseph Bankman, both professors at Stanford Law School.[2] His aunt Linda P. Fried is the current dean of Columbia University Mailman School of Public Health.[15] His brother, Gabe Bankman-Fried, is a former Wall Street trader[16] and the director of the non-profit Guarding Against Pandemics.

Politics
Sam Bankman-Fried was the second-largest individual donor to Democratic causes in 2021–2022 election cycle with total donations of $39.8 million, only behind George Soros.[59][60][61] Of this, $27 million was given to Protect our Future PAC, bankrolled by Bankman-Fried.[62]

And the funniest bit of all? Who is handling the bankruptcy??? None other than Jon J Ray III who just happened to be in charge of the liquidation of….. ENRON!

Then too, there’s this: