Have “The Powers that Be” Just Staged a False Flag to Foment a Race War across America? 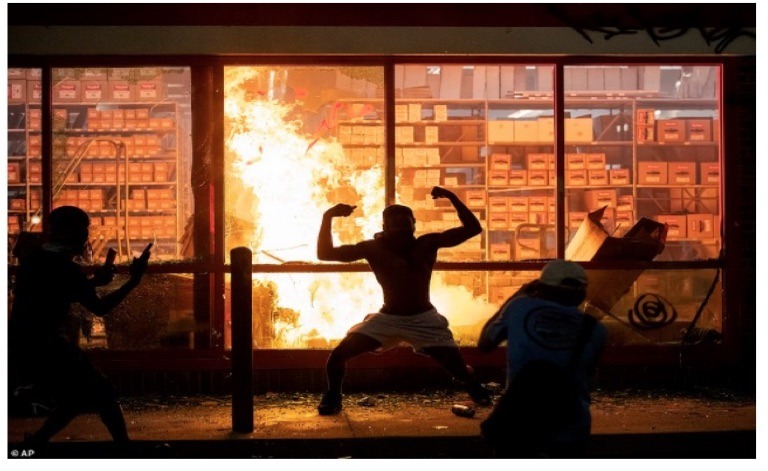 Let me preface by stating the following: If the killing/murder of George Floyd occurred exactly as the videotape shows and the Minneapolis city officials tell us, then Mr. Floyd’s death is indeed a needless, disgusting and reprehensible act perpetrated by the worst kind of police officers – officers who deserve to lose their jobs and be prosecuted to the fullest extent of the law.

But, what if something even more sinister and evil was afoot? What if the death of George Floyd wasn’t a death at all, but a cleverly organized and scripted psy-op purposely perpetrated in order to sow further racial tensions in the United States in order to further an on-going agenda?

The above statement might sound completely ludicrous to most – the unsubstantiated ravings of yet another “conspiracy theorist”. However, I encourage the reader to bare with me, exercise some critical thinking and keep an open mind.

Let us first cover a few basics before diving into this event. Whenever we hear a story such as this, and witness video which depicts what looks to be a horrific act, our first instinct is usually shock and disgust – and rightfully so. We are after all a highly social species with empathy toward our fellow human being and a sense of fair-minded justice. However, we also tend to react to such events on a deeply emotional level often overlooking other factors involved.

Very often we fall victim to the logical fallacy known as Appeal To Popular Sentiment. In other words, if it’s reported as fact by the mainstream media and government officials, and everyone else around us appears to believe it too, then it must be true. However, this is very often not the case at all, especially with a corporate media and government that has been exposed over and over again as deceptive and untrustworthy.

A better way to look at these types of events is to employ what is known as Inference To The Best Explanation. In other words, is what we are being told the actual truth of the matter, or do we find inconsistencies, anomalies, contradictions and/or other details that would cause the average person to question the official narrative?

There is a doctrine within our legal framework known as Fraud Vitiates Everything. In other words, if one aspect of a case and/or incident can be shown to be fraudulent or highly suspect then we can assume that it is likely that the entire case and/or incident is or was predicated on fraud, or that a conspiracy exists.

The following observations are my own. Make of them what you will, look at the evidence yourself and come to your own conclusions. I have spent nearly thirty years in law enforcement with fifteen of those years spent as a general detective. I am detail-oriented and naturally possess an analytical disposition. When looking at incidents such as this my first instinct is to look at the “big picture” and not simply respond out of emotion and/or outrage. With that in mind let us now look at what transpired in Minneapolis that has now ignited literal fires now consuming the country.

Video taken by witnesses at the scene purports to show Minneapolis Police Officer, Derek Chauvin, arresting suspect George Floyd. Officer Chauvin is using pressure point pain compliance, in order to affect Floyd’s arrest, by placing his knee onto Floyd’s brachial artery. Pain compliance techniques such as this are taught by law enforcement agencies throughout the United States and have been adjudicated as lawful by various courts, including the U.S. Supreme Court. In addition, officers receive on-going yearly training on these techniques and these techniques and their applications are meticulously documented within individual departments SOP’s (Standard Operating Procedures).

With that said, this technique is typically only employed with a suspect who is being combative and/or resisting arrest. From the video evidence I have seen thus far Mr. Floyd appeared to be neither combative nor resisting arrest, but appeared to be compliant. Therefore, in light of this, was this technique necessary to employ in the first place? Probably not. There are other far less invasive techniques of compliance that could have been employed.

What really piqued my interest while watching the video was the overall reaction and demeanor of the four officers who were present. As police officers we are constantly reminded and always aware that everyone has a cell phone, which also has video capabilities. People love to film the police (as they should to help hold us accountable and to protect themselves and others) and each officer knows this. Again, the courts have upheld numerous cases and citizens have the right to film police interactions as long as the person(s) making the video are not interfering with an investigation and/or placing themselves, the general public or the officer in danger.

Because officers are astutely aware of video cameras everywhere I found it quite interesting that four seasoned police officers appeared to be completely unaware or unconcerned that their actions and behavior was being captured on film.

While you do, unfortunately, have cops that get angry and abuse their authority you seldom see it on this level. Many times the police caught on video had no idea they were being filmed. Other times you see them realize they are being videotaped and their demeanor and tactics quickly do a 180 and they begin behaving in a more civilized manner.

I simply cannot comprehend, nor believe, that the three other officers on the scene did not admonish their comrade who was clearly in the wrong, separate that officer from his suspect and advise that officer to calm down. This suspect was clearly not being combative and/or resisting in any way.

I have intervened many times on an arrest scene and taken over because the arresting officer was “amped up” and needed to calm his adrenaline. It happens all the time. It’s part of our responsibility to keep our fellow officers in check.

In reference to the on-scene video the black bystander, later identified as Donald Williams, who kept telling the officers to get the suspect off the ground and repeatedly stating, “He can’t breathe. He can’t breathe” appears to be a crisis actor and very likely in on the plan. He was interviewed on CNN and his statements made no sense. He was also displaying constant duping delight, which we see in a lot of these staged event.

Duping delight is a kind of subconscious coping mechanism displayed in the form of laughing or smiling when it would be considered inappropriate. Ask yourself. Would any sane and rational person smile and laugh while they were describing such a horrific and traumatic event?

In addition I also watched an interview with family members filmed less than 24 hours after the George Floyd’s death. Those being interviewed were his two brothers and a female cousin. All three seemed to lack a display of genuine grief and appeared to be reciting from a script. One brother repeatedly stopped, took off his glasses and appeared to be wiping away non-existent tears. People don’t tend to wipe away tears that are not actually present. Also, this same individual kept referring to his brother as a “gentle giant” who “wouldn’t hurt anyone.” Again, this is a phrase we often hear in these orchestrated events.

Another question to ask is whether it seems plausible that immediately family members would want to be interviewed by the media less than twenty-four hours after receiving such devastating and tragic news about a loved one? The average person would need time to deal with the sudden shock and the overwhelming deluge of emotional that accompanies such tragedy. After all, according to Kubler-Ross Grief Scale, denial and isolation are part of the first stage of grief.

This is another red flag for a false flag event (again thinking about Inference To The Best Explanation) yet so many times we have seen family members giving interviews when they should be grieving.

Whenever I mention a family member’s lack of grief I am often countered with the argument, “Well, that doesn’t mean anything because everyone grieves differently.” This, however, is a misconception. The Five Stages of Grief, first outlined in 1969 by Elisabeth Kubler-Ross in her book titled On Death and Dying, has been the standard by which we associate grief in the Western World.

Yet another anomaly I found with this incident was witnessed when I watched an interview with the next door neighbors of Officer Derek Chauvin (A name that coincidently also sounds like “male chauvinist” ). Both individuals stated that they did not know Chauvin well and that he kept to himself. However, they also stated that they didn’t even realize that he was a police officer!

That’s an interesting statement. In viewing the Minnesota Police Department’s policies and procedures it appears as though only certain officers are issued take-home police vehicles. I don’t know if Officer Chauvin was one of those officers. However, Chauvin is a uniformed officer. For his next-door neighbors not to have noticed a fully uniformed police officer coming and going is highly suspect. Here is a link to the video. 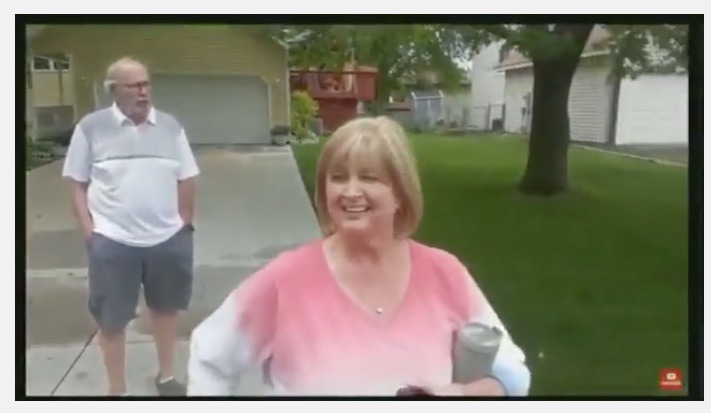 Next-door neighbors had no idea that Derek Chauvin was even a cop, but thought he was in real estate.

Lastly, let’s look at the numerology and symbolism seen in the on-scene video. One of the first images we see is that of a trash can. This trash can has a prominently displayed and very colorfully spray-painted onto it a large number “6”. Then we see the license plate on the police car which is 320, or 3×2=6 and/or two threes = 33. All these numbers play heavily in these orchestrated events.

Also, during the video you see a city bus pass by. It’s quick, but you see a billboard on this bus that says, “Open Your Eyes” and a women making a peace sign over one eye – notating the Illuminati one-eyed symbolism.

As many will be aware, the powers that be esoterically show us what they’re doing. However, the general public is ignorant to this fact, which is exactly why the PTB get away with it.

If this is what really happened then it’s a brilliant plan on the part of our elite controllers. What better way to sow further chaos in this country than to foment race riots in the midst of their (also staged) pandemic. It further divides an already splintered and confused populace while benefiting the left and the Democrats in particular.

Not all too coincidental was Biden and other Democrats telling black voters that they aren’t really black if they voted for Trump, etc. Then, suddenly, you have a black man killed by a white cop in broad daylight with dozens of witnesses that also gets videotaped for all the world to see?

In closing let me reiterate that I am not saying with 100% certainty that this was a completely staged event. It may turn out to have happened exactly as described. However, there are just too many anomalies present for me to ignore and it seems that with every passing hour we find yet another. I encourage everyone to use their own discretion and look into the evidence to make your own conclusion. As always, this is just one man’s opinion based on my professional expertise and background.