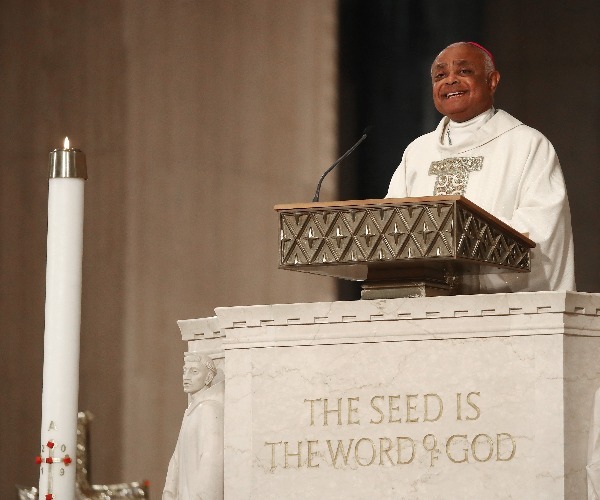 New Archbishop of Washington, Wilton D. Gregory, delivers his Homily during his Installation mass at the National Shrine of the Immaculate Conception in Washington last year. He’s the former Archbishop of Atlanta. (Mark Wilson/Getty Images)

President Donald Trump has signed an executive order on religious freedom, even as he’s come under fire over visits made to religious sites amid protests over the death of George Floyd.

According to Fox News, the order has not yet been publicly released, but a senior administration official said it was intended to  protect “people of faith around the world.”

“This executive order fully integrates the president’s vision – a vigorous defense of international religious freedom rights for all – into key aspects of United States foreign policy,” the official said, according to the news organization. “Yet again, President Trump is taking a decisive action to keep his promise to people of faith around the world.”

Earlier Tuesday, Trump and first lady Melania Trump visited  the National Shrine in Washington, a place of significance and prayer for Catholics. It came after Trump on Monday night walked out of the White House after a speech in which he pledge to use military resources to quell protest violence, heading across the street to St. John’s Episcopal Church.

That site had been burned amid protests over Floyd’s death at the hands of Minneapolis police. Tear gas and flash bangs were used to disperse protesters and clear the path for Trump’s Monday night walk and photo at St. John’s.

“I find it baffling and reprehensible that any Catholic facility would allow itself to be so egregiously misused and manipulated in a fashion that violates our religious principles, which call us to defend the rights of all people even those with whom we might disagree,” Gregory wrote.

“Saint Pope John Paul II was an ardent defender of the rights and dignity of human beings. His legacy bears vivid witness to that truth,” Gregory added, concluding, “He certainly would not condone the use of tear gas and other deterrents to silence, scatter or intimidate them for a photo opportunity in front of a place of worship and peace.”

Gregory’s statement was made following Trump’s appearance in front of St. John’s Episcopal Church on Monday. There, he posed for a photo with a Bible.

Trump was criticized by many religious leaders for that photo op because military police cleared out protesters with tear gas prior to his arrival.

Episcopal Rev. Gini Gerbasi posted on Facebook that she was “driven off” the church’s patio by police for Trump’s “cheap political stunt.”