What type of Revolution is it? French, Bolshevik, Cultural or all 3?

Revolutionary imagery is ubiquitous right now. But real structural change involves more than the toppling of statues, and what happens next is a matter of chance. 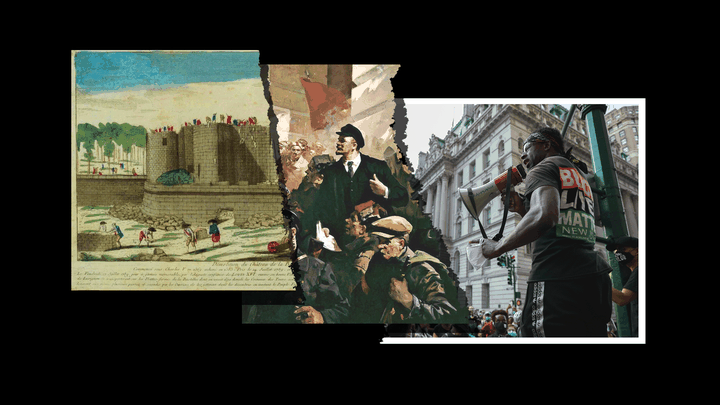 Three months ago, a global pandemic and a sudden economic crisis looked grave enough to suggest that something—if not a revolution, then at least the stirrings of a revolutionary era—was under way. Since then, the revolt against the pre-coronavirus status quo has only gained force. Crowds chanting “Black lives matter” and “Enough is enough” have marched all across the country. Statues have been toppled, buildings have been renamed, and pollsters report that public opinion has shifted with almost unprecedented speed. In Ferguson, Missouri, and San Juan, Puerto Rico, protesters carried a guillotine. As a historian of the French Revolution, I can’t help but pay attention to guillotines (adopted in the 1790s as an alternative to the cruel and unusual punishment of death by hanging). If the United States right now is not in the early months of a revolution, Americans are certainly surrounded by the signs of past ones.

Revolutions dress up in the costumes and rhetoric of the past for the same reason that, as Karl Marx once asserted, people learning a new language begin by translating word for word from a language already known to them. By repeating gestures and slogans from past upheavals—such as damaging a statue of Louis XVI, the French king beheaded in 1793—people pushing for permanent social change make the present recognizable as revolution. They might as well be chanting, “This is what a revolution looks like.”

Simultaneously, opponents can exploit the word’s association with violence to make any change seem frightening: When early election returns in New York and Kentucky appeared to favor progressive insurgents over establishment favorites, the Republican Senator Lindsey Graham tweeted that the French Revolution had come for the Democratic Party. In an article likening “the illiberal left” and “cancel culture” to Robespierre, the libertarian author Samuel Gregg predicted that the United States is about to fall into an intolerant Great Terror of “wokeness.” In images that went viral Sunday, a St. Louis attorney brandished a rifle as protesters passed his palatial home. He thought they were “storming the Bastille,” he told an interviewer later.

Would-be revolutionaries and radical counterrevolutionaries both forget, however, that real revolutions invariably catch people by surprise. Revolutions happen when the distinct concerns of many different groups are for a time more or less soldered together—and this coming together is not planned in advance, but produced largely by chance. This is what historians call “contingency”: One thing builds on another in a way that is neither inevitable nor easily reversed.

Think about the Russian Revolution. Mutinies in the army, strikes in the factories, a parliamentary body willing to ignore the czar and declare itself a provisional government—all these dramatic struggles had been under way for months before the Bolsheviks eventually took power. So, too, the Black Lives Matter movement has been building for years. Now the COVID-19 crisis and establishment politicians’ continuing battle with Donald Trump have helped move Black Lives Matter’s concerns to the center of American politics. The threat to Black lives from official violence, the failure of anything like public-health policy, the catastrophic scale of unemployment, the inadequacy of federal and state relief measures (so mistakenly referred to as “stimulus”), the climate crisis, America’s dramatic loss of international status over the past four years: All of these threads are now interwoven. It is too early to tell what shape the resulting social fabric will take.

The historian William Sewell Jr. helpfully distinguishes between ordinary “events” and “historical events”; the latter resonate as world-changing because they somehow transform the very structures of daily life. In his analysis, the reaction to and aftereffects of an event—and not just the event itself—determine whether it is historical. Imagine, for instance, if the United States Navy had responded to the bombing of Pearl Harbor by concealing the number of lives lost and saying it had long planned to scupper the USS Arizona—the attack would still have happened, but it wouldn’t be the historical event “Pearl Harbor” anymore.

Or consider the French Revolution. In the summer of 1789, King Louis XVI convened roughly 1,100 men from France’s tiny elite (aristocratic military officers, major landowners, lawyers, clergy) for the first meeting of the Estates-General (the closest thing the kingdom had to a national parliament) in 175 years. Refusing to abide by rules that effectively silenced most of those notionally represented (as gerrymandering and voter suppression thwart the popular will today), many delegates instead proclaimed themselves members of the National Assembly, a new, constitution-writing body. This was a standstill, not a revolution.

A few weeks later, the king summoned troops to Paris and fired his most popular adviser. Parisians poured into the streets; on July 14, about 800 of them swarmed to the Bastille, a fortress on the city’s edge, where they hoped to find weapons and gunpowder. First welcomed by the fortress’s defenders, then fired upon, the crowd eventually succeeded in getting the troops to lower the drawbridge and abandon the Bastille. They then marched the soldiers to central Paris, killed the commanding officer, and paraded his head through the streets on a pike. Popular unrest had become a rebellion, but not a revolution.

When word of the violence and mayhem in Paris first reached the National Assembly, 20 miles away in Versailles, its members were horrified. Educated men, many with great fortunes, they had little personal sympathy for a mob of workers and agitators. Fearful for their own lives, many worried they would be the next victims. Within days, however, their anxiety turned to hope, as National Assembly members who took part in a fact-finding mission to Paris reported being greeted by a peaceful and joyous crowd eager to shake their hands. Men whose politics we would today characterize as center-right then spoke positively about the attack on the fortress, describing its conquest as legitimate resistance to tyranny—much like their own decision to write a constitution.

Rebecca L. Spang: The revolution is under way already

The modern concept of revolution—as an enduring political and social change created through mass action—can be traced directly to that reevaluation. Neither the creation of the National Assembly nor the attack on the Bastille was a revolution in and of itself. Both might be dismissed as “performative” insofar as neither alone achieved anything like its stated goals. But revolutionary events, those that result in sustained transformations of society, are not made by strategic plan. They do not have bullet-pointed deliverables and clear metrics of success. If they did, they would be business as usual, not a revolution.

The protesters seeking justice for George Floyd have similarly combined collective creativity, a devotion to ritual, and an ability to draw mainstream approval. The Black Lives Matter movement has worked for years to oppose police brutality and show how the American justice system condemns Blackness and routinely presumes the guilt of Black boys and young men. The grossly disproportionate health and economic effects of the COVID-19 pandemic made fundamental inequalities all the more glaringly apparent. But it was Donald Trump encouraging governors to “get tough” with protesters and his threat to mobilize the United States military that attracted prominent supporters and establishment politicians—including former President George W. Bush, Senator Mitt Romney, and many others—to the cause.

An unexpected and growing coalition now exists. On a basic level, these are pro-democracy protests made difficult to recognize as such because they’re happening in a country that has widely been considered a leading site of liberal democracy. Critics have been fast to dismiss statements from Romney, Bush, and others as mere show, but they signal a decisive change in the direction of public opinion. Republican leaders may (in the eyes of many activists) be on the wrong side of history, but they want to be on the right side of the future.

Yet if one major lesson of the French Revolution is that people make history, another is that it rarely turns out as planned. The members of France’s first National Assembly were hardly men with an obvious stake in disturbing the status quo. Their conscious impulses in the first months of the revolution were in many ways conservative; they wanted to protect themselves, ensure continuity, and get things over with as quickly as possible. In the name of honoring the absolutist monarchy’s debts, however, many of them opted for policies (such as nationalizing properties held by the Catholic Church and issuing a new currency) that proved to be far more disruptive than expected. We might think of the revolution’s radicalization as a Möbius trajectory—moving in what seemed to be a single direction, it nonetheless arrived on the other side of a metaphorical strip.

If the United States is in the middle of a new American revolution, months and probably years will pass before its effects or causes are fully discerned. Even when structures are unstable and existing institutions lack legitimacy, “old regimes” never fall apart neatly and completely—they have to be taken apart piece by piece. Tearing down the Bastille took nearly a year; years more passed before the workers who did the job had all been paid. Late on the night of August 4, 1789, members of the National Assembly voted to give up privilege and abolish feudalism. But privilege (literally, “private law”: one set of laws for the nobility, one for everyone else; one set of laws for the province of Brittany, one for Normandy; one for pork butchers, one for pastry cooks) had been the foundation of the kingdom’s entire judicial and administrative order. Only after decades of legal, political, and violent conflict was something like a new order stabilized.

The protocols and norms that emerged in the aftermath of 18th-century revolutions—the inviolability of private property, the abstract idea of the rights-bearing individual, the fiscal-military nation-state—are today under attack as forms of privilege themselves. For now, translating that critique into an existing revolutionary vocabulary (the “poetry of the past,” Marx called it in the text I mentioned above) helps to sharpen it and draw attention to it. But those acts of translation should not, however, be mistaken for revolution itself. For real structural change, Americans will need to look not behind them to vanished certainties but ahead to uncertain possibilities. What is the difference between a revolution and the failure of a state or the collapse of an empire? Only that in a revolution, many men, women, and children have the emotional energy to imagine a better future and put lots of creative work into trying to make it so.

We want to hear what you think about this article. Submit a letter to the editor or write to letters@theatlantic.com.

Rebecca L. Spang is a professor of history at Indiana University. She is the author of The Invention of the Restaurant: Paris and Modern Gastronomic Culture and of Stuff and Money in the Time of the French Revolution.