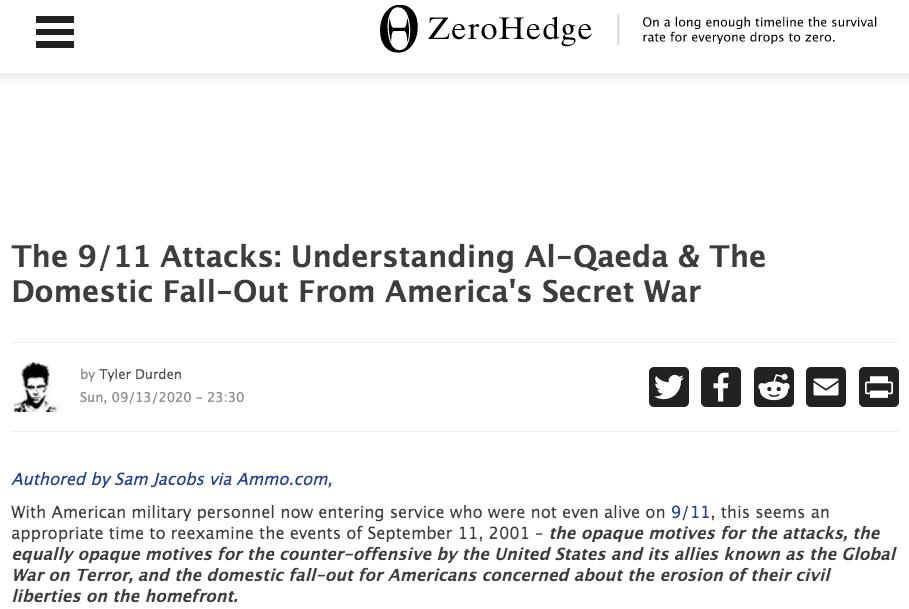 Why did ZeroHedge so brashly and shamelessly betray it’s readership by posting such a ridiculous 9/11 article?

The numerous comments posted under the article reveal not a single
commenter who supports ZioHedge’s egregious insult to the entire
9/11 Truth Movement.

There does exist the remote possibility that ZeroHedge deliberately posted the following falsehood-ridden article because Google criteria forced them to. https://www.zerohedge.com/geopolitical/911-attacks-understanding-al-qaeda-domestic-fall-out-americas-secret-war

More likely, however, is the scenario whereby ZeroHedge sold out and is now controlled by Zionist Neocon masters.  The massive Alt Media platform publishes far too many propaganda pieces written by transparent Neocon Zionist think tanks.

The upside to these perfidious postings is that the ZioHedge audience gets a chance to really sound off about the utterly fallacious content.  And most everyone loves reading the comment section much more than many of their nonsensical articles.

By the way, here’s just one hilarious excerpt from the preceding ZioHedge link:

What is less often talked about is perhaps an even more stunning feat the hijackers pulled off: Being able to evade the attention of the United States intelligence community while planning their attacks. Indeed, their acumen with regard to covert operations was so great that they were effectively able to steal an air force for the attacks. It’s not that they were absent from the radar of U.S. intel services – it’s that no one was ever able to connect the dots.

Indeed, they understood the game so well that Osama bin Laden was able to call his mother two days before the attack to tell her: “In two days you’re going to hear big news, and you’re not going to hear from me for awhile.” He knew he was under surveillance by the NSA, but he also knew the turnaround time on intel was three days.

Another oft overlooked quality that the hijackers had was discipline and intestinal fortitude. It is important to remember that courage is a virtue, but it does not carry a moral weight of its own. The men who perpetrated the attacks on 9/11 went to their deaths in a disciplined fashion, carrying out their orders to the letter. This is not something a coward, a simpleton, or a psychopath does.

While the evidence for the attack was able to be collated in hindsight, it is not an exaggeration to say that the United States was more surprised by the attack of 9/11 than it was by the attack on Pearl Harbor.

Maybe, just maybe, Tyler Durden at ZH posted this totally hysterical piece to get a good laugh from their overly serious audience.   [SOTN Editor’s Note: We hope so.]

There’s also the distinct possibility that ZH stole it from The Onion.