Here’s how Deep State is colluding with the MSM to undermine Trump’s Covid response.

With the president infected, the group responsible for combating the virus remains a mess. At the center of the drama is one man: Dr. Scott Atlas. 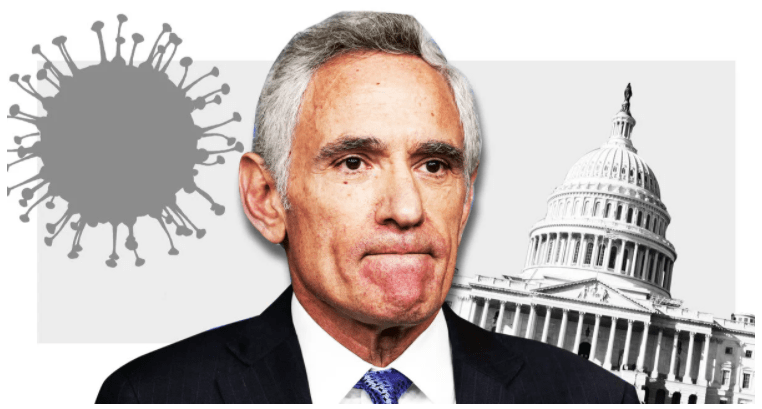 Photo Illustration by The Daily Beast/AP

The announcement that President Donald Trump, his wife, and a top White House aide contracted coronavirus threatened, on Friday, to bring unprecedented levels of tumult to the federal government.

But even as the president was rushed to the hospital at Walter Reed, for what the White House said would be days of observation, rest and testing, officials inside the administration said they didn’t anticipate much of a shakeup in their approach to combating COVID. There would reportedly be no official revised mask policy, which remained encouraged but not required. The White House’s COVID task force would not take on an enhanced role, after operating for months on fumes.

“It’s business as usual,” as one White House official put it, even as the pandemic had come bursting through their front door.

The approach may have seemed odd considering the stakes: the leader of the free world, silent and out of sight, helicoptered to a hospital to deal with a deadly virus. But, to a degree, it merely echoed the science-skeptical mindset that has gripped Trump and his team as it has approached a likely spike in COVID cases this fall. By Friday, even some of the president’s top boosters were wondering if it was all insane.

“I support [the president’s] re-election, I think he’s done an amazing job, I think he’s Ronald Reagan on steroids. But one thing I personally don’t understand is why people don’t wear masks. I don’t understand it. Why don’t they wear masks? The president should tell people to wear them!” businessman Shalabh “Shalli” Kumar, a Trump and GOP mega-donor and chair of the Republican Hindu Coalition, said on Friday afternoon. “I hope [the infection] is very minor, and I hope that there’s no negative impact on him or the first lady at all, or anybody else associated with them. I’m very concerned about this.”

Elsewhere in Trumpworld, there was anger and internal frustrations over how the virus in general and the president’s infection in particular had been handled. Among White House staff and the re-election effort, some advisers were furious that Trump wasn’t talked out of attending a high-roller fundraiser at his Bedminster, New Jersey, golf club on Thursday night, after the White House already learned of his exposure to the virus, two administration officials said. The senior official was also exasperated that the way the White House bungled the information rollout in the past couple days left the administration wide-open to allegations of yet another disastrous cover-up.

“It’s just fuck-up after fuck-up,” said a senior administration official who works with the coronavirus task force. “I don’t have much more to add [beyond] that.”

The anger expressed in some corners of Trumpworld on Friday was similar to the frustrations those inside the administration have come to feel. For weeks the president’s medical advisers have been increasingly on the outs. But in recent days officials have grown increasingly resigned to the idea that keeping the public informed about the threats the virus poses while maintaining favor with the president is an impossible task.

In the hours leading up to the president’s announcement of a new coronavirus testing initiative last week in the Rose Garden, officials at the Centers for Disease Control were left in the dark about the initiative’s actual details. Earlier in the day, Vice President Mike Pence and Adm. Brett Giroir, the administration’s coronavirus testing czar, had hosted a call with the nation’s governors, during which they said that the federal government planned to send states batches of Abbot BinaxNOW point-of-care tests, free of charge, with the hope that they use them for the reopening of schools.

But neither Dr. Anthony Fauci, the nation’s leading infectious disease expert, nor CDC Director Robert Redfield were on the call. And when Trump ultimately unveiled the initiative at the Rose Garden, neither Redfield, Fauci nor Dr. Deborah Birx, the coordinator of the White House coronavirus task force, appeared alongside him. (Birx has been traveling across the country to work with colleges to slow community spread). Instead, the president turned to Pence, Giroir and Scott Atlas, an adviser to Trump on COVID-19 issues, to promote the new testing plan.

For those who continue to warn that the virus will infect and kill more Americans without serious attention paid toward stopping community spread, the frustrations have hit a boiling point.

“We used to meet seven days a week. Then five days a week. We’re now meeting one day a week and at most two times a week,” Fauci said during an interview with AIDS & LGBT rights activist Peter Staley last week. “The way things have evolved at the White House is that there has been a pivot away from the reliance on a daily type of a task force discussion… on policy making and policy implementation… more towards how are we going to get this country open again economically. There is another science person— Dr. Atlas— who is much more with the president than any of the other task force members particularly Debbie Birx who used to be in that position. This is a unique situation.”

At the heart of the matter is Trump’s belief that his election hinges on convincing the public that the virus is not the threat his own science advisers say it is.

The president and his team have traveled across the country, greeting voters and other supporters without masks. Some of those events have been inside—including rallies—while others were held outdoors. And during the presidential debate on Tuesday, Trump publicly questioned the analysis of his own coronavirus officials, saying he did not agree with a timetable that a coronavirus vaccine would not reach the American people until well into next year.

But the current delta between Trump’s political objectives and scientific reality is, sources say, even worse than it appears publicly.

Over the last several weeks, officials within the CDC, including several working with the White House coronavirus task force, have grown increasingly frustrated with the president, who they say has sidelined the nation’s top scientists and health representatives in an effort to control the narrative around the pandemic’s spread. While most admit the CDC has made mistakes, including accidentally posting guidelines about COVID-19 aerosol transmission, officials say the president has pushed aside top health officials throughout the administration primarily because they have questioned his approach to responding to the virus.

Central to the dysfunction, officials say, is Atlas, a Rasputin-like figure who has increasingly gotten hold of the president’s ear.

Several officials who interact with the neuroradiologist expressed frustration that President Trump had put his trust in an individual who has little experience working on infectious disease outbreaks. Increasingly, those frustrations are bubbling to the surface in ways that would have been unheard of in past administrations.

“He’s doing things that you would do if you wanted to tear apart the task force,” one senior Trump administration official, who works closely with the group, said of Atlas. “The president was already doing a fine job ignoring much of the counsel coming out of the task force, but [Atlas’s ascension] has made it even worse.”

This official referenced several times this summer, during which the United States had seen coronavirus surges in various areas, when Trump was being briefed on virus data or worsening situations, and would reply, “What does Scott have to say,” or “What does Scott think?”

Trump had told senior officials in recent weeks he doesn’t see Atlas on TV enough and wants him booked on more programs and cable-news shows representing the administration’s policies, said a source with direct knowledge of the president’s wishes. But even Fox News—whose airwaves initially drew Trump to Atlas—has grown wary of putting him on some programs, owing to his policy prescriptions that are deemed by many to be out-of-touch with mainstream scientific and public-health opinion.

And within the administration, trust in Atlas is even lower. In the interview with Stanley, Fauci called out Atlas for undermining an assessment by Redfield that 90 percent of Americans are still susceptible to the virus.

“I thought it was extraordinary inappropriate for him [Atlas] in a press conference like that to contradict the director of CDC as opposed to saying ‘you know, it is a complicated issue and I think I’d like to sit down and discuss this with the people from the CDC’,” Fauci said. “And then what has happened, he’s a smart guy, no doubt about it, but he tends to cherry-pick data.”

Redfield has also been quoted speaking critically about Atlas, saying—in comments overheard by NBC last week, that “everything” Atlas “says is false.” Multiple officials working with the task force, meanwhile, have said that Atlas, the president and other advisers have downplayed case numbers and complicated their efforts to inform the public about how local communities can stop the spread of the virus by issuing public health ordinates, such as mask mandates, and by recommending stricter lockdown measures.

On Friday, hours before Trump was flown to Walter Reed, Atlas was quoted as predicting the president would make “a complete and full and rapid recovery.”

There was, he insisted, “zero reason to panic.”