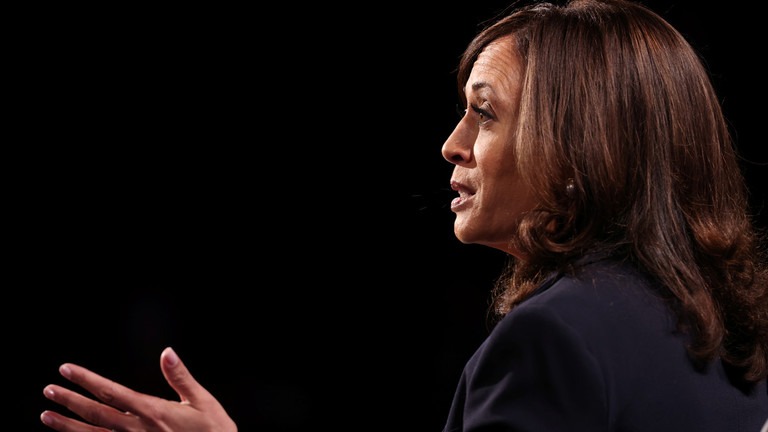 Kamala Harris has come a long way – if Joe Biden wins and is unable to serve a full term, she could become president of the most powerful nation on Earth – largely on her ability to look people in the eye and confidently lie.

That ability was front and center in Wednesday night’s vice presidential debate, where Harris told bold fib after fib with scarcely a blink and got little pushback from Mike Pence. In the end, she walked off relatively unscathed and, of course, won praise from her adoring mainstream media, which has always loved her more than voters.

The first egregious deception came when Harris feigned outrage over last month’s New York Times non-bombshell about President Donald Trump’s tax returns. Harris could barely contain herself waiting for friendly moderator Susan Page to spit out the rest of the question, setting up her rehearsed attack on Trump’s loans.

“Just so everyone is clear, when we say in debt, it means you owe money to somebody,” Harris condescended as she accented her point by nodding her head. “And it’d be really good to know who the president of the United States, the commander in chief, owes money to because the American people have a right to know. What is influencing the president’s decisions, and is he making those decisions on the best interest of the American people, of you, or self-interest?”

Turns out the government already thought of that and realized the people’s right to know. As Harris, of all people, would know, such information is publicly available at our fingertips. Holders of high office, including the president, must file annual financial disclosures, including information on their borrowings. Senators, including Harris, also have to submit such filings.

In Trump’s case, the loan information is all right there on page 35 of his 78-page 2020 financial disclosure. Lender names, loan types, amount ranges, interest rates and maturity dates. As a vice presidential candidate, a senator and a former prosecutor, Harris knew that. And as a person with a brain, she knew that over $400 million in debt is not a shockingly big number for an organization the size of Trump’s business empire. Companies with too little debt relative to their size are sometimes scolded by stock analysts for leaving too many money-making opportunities on the table.

But Harris wasn’t speaking to stock analysts. She was talking to the people she thinks might need help in understanding that having debt means owing someone money. And the media was right there to play pretend with her, with CNN saying Harris zeroed in on Trump’s taxes and “mystery debt.”

And so it went all night, including a favorite Democrat hoax target, Russia. Harris again relied on dubious New York Times reporting, this time referring to an anonymously sourced article saying Russia had offered bounty payments to Afghan fighters to kill US troops in Afghanistan – even though Trump, the Pentagon, and top intelligence officials have pointed out that the allegations were unverified. Despite months of speculation since the June report, the US military has been unable to find evidence confirming the story.

Harris didn’t care, treating unsubstantiated rumor as fact. “Russia had bounties on the heads of American soldiers,” she began, before again dumbing down her fake outrage. “And you know what a bounty is? It’s somebody puts a price on your head, and they will pay it if you are killed.”

Wagging her finger to punctuate each syllable, she added: “Donald Trump talked at least six times to Vladimir Putin and never brought up the subject. Joe Biden would never do that. Joe Biden would hold Russia to account for any threat to our nation’s security or to our troops.”

Harris showed no shortage of boldness in confidently telling voters to believe her, not their lying eyes. When Pence said Biden and Harris want to “abolish fossil fuels and ban fracking,” Harris adamantly said, “First of all, I will repeat, and the American people know that Joe Biden will not ban fracking. That is a fact.”

The problem is, both Biden and Harris have said on video that they plan to ban fracking. Or maybe it’s not a problem for masters of deception to play both sides of the same issue, but how are Biden-Harris supporters to know which line is the lie? The bet for Harris is that people who want fracking banned would sooner move to the Moon than cast a vote for Trump, so no need to worry about losing them with a little subterfuge.

Harris also dodged some questions, pretending as if she had been asked something else, but she wasn’t alone in declining to address certain topics. For instance, she and Pence both dodged a question about succession planning with their elder running mates.

Harris also pretended that this year’s collapse of the US economy stemmed from Trump’s policies, rather than the Covid-19 pandemic. She blamed the loss of 300,000 manufacturing jobs on Trump’s trade war with China, rather than the virus, as if the current administration’s 2017-2019 economic successes didn’t happen. “The American people know what I’m talking about,” she said, using a favorite propagandist technique. “You know.”

But the damage was done. People who may need help understanding the definition of debt or bounties were already convinced. Tell your story with this much confidence – with this much rhythmic hand gesturing, pleading eyes and an almost total absence of flinching – and it must be true. And if it’s not, Harris will confidently tell us in some future debate that she never said such a thing.