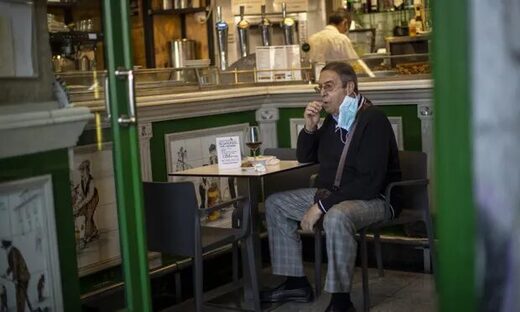 © Manu Fernández/AP
A customer sits inside a bar in Madrid on Friday.

The Spanish government has declared a state of emergency to keep Madrid in partial lockdown as countries across Europe struggle to deal with the continuing surge in new coronavirus cases.

The move came as Italy logged more than 5,000 new daily coronavirus cases for the first time in six months, and Germany recorded more than 4,000 new infections for the second day in a row. Following a meeting with mayors, the German chancellor, Angela Merkel, announced that some areas would be given 10 days to improve the situation or face tougher action.

Spain’s Socialist-led cabinet on Friday finally lost patience with the Madrid regional government’s refusal to obey its calls for greater action in and around the capital, where infection rates are more than twice the national average.

The declaration, which takes immediate effect, came hours after the prime minister, Pedro Sánchez, gave Madrid’s conservative regional president, Isabel Díaz Ayuso, an ultimatum: maintain the partial confinement of the capital and nine nearby towns, or face the imposition of a state of emergency.

Comment: Isn’t that an abuse of the notion of a ‘state of emergency’? Surely those actually based in Madrid would have a better idea of what is best for its citizens, and it’s telling that they do not see any need for lockdown.

Salvador Illa, the national health minister, said the state of emergency was needed to protect people in Madrid and to stop the pandemic spreading into other regions.

He announced the measures would remain in place for a fortnight, and also pointed out that other European cities had taken similar, or more drastic, action, despite having far low infection rates.

Comment: Indeed. The coordinated and similar actions of numerous Western countries, including England, Scotland, Brussels, Ireland and France are very curious. Because there’s no science backing these moves, and the sheer coincidence of them all taking similar action – such as curfews and banning alcohol sales – begs the question, just where are these orders coming from? Scotland imposes more regional lockdowns, bans alcohol sales claiming it affects ‘willingness to follow rules’

“The president of Madrid has decided to do nothing,” said Illa. “Over the past week, 63 people have died from Covid-19 in the Madrid region. Right now, there are 3,361 people in hospital in the Madrid region. There are 498 people fighting for their lives in the region’s intensive care units. We can sit on our hands or we can stop down the virus. Politics is about serving people and stopping the virus.”

Comment: The evidence that the death rates are continuously inflated has been shown since the beginning of the lockdown, but, even if those numbers were real, is it rational to lockdown an entire city of nearly 5 million people because of the deaths of just 63 people?

The limited lockdown ordered by the government a week ago bans all non-essential movement in and out of the confined areas, but allows people to travel to work or to seek medical treatment.

Comment: And the Spanish army are out on the streets enforcing the check points.

Ayuso’s government had reluctantly obeyed the order, but launched a successful legal challenge, arguing that its own actions were bringing the situation under control and that the central government had no right to step in.

Comment: Oddly (or not when you realise who this news organisation is in league with) The Guardian fails to mention what the legal challenge actually said, and that was that the lockdown is ‘harmful to the fundamental rights and freedoms’ of the people.

Ayuso is urging people in Madrid to stay in the city over the bank holiday weekend, but her administration has refused to heed the government’s calls for tougher action, instead proposing a last-minute plan to confine 51 areas where there have been more than 750 new cases per 100,000 people.

The regional health minister of Madrid, Enrique Ruiz Escudero, described the state of emergency as “an unjustified attack on the people of Madrid”.

By Friday, Spain had logged a total 861,112 Covid cases – a rise of 12,788 on the previous day. The Madrid region accounts for a third of all Spain’s cases and a similar proportion of the country’s 32,929 deaths.

“We all sense that the big cities, the urban areas, are now the arena where we will see if we can keep the pandemic under control in Germany as we have done for months, or if we lose control,” the chancellor said following talks with mayors.

Comment: Indeed they are providing governments with the opportunity for putting on a show of force.

“The coming days and weeks will decide how Germany gets through the pandemic this winter.”

Comment: Meanwhile in the UK Bojo is threatening lockdowns in order to ‘save Christmas’.

Merkel said past experience had shown it takes “about 10 days” to see if such efforts succeed in slowing the outbreak.

If the infection rate does not stabilise in that time, “further targeted restrictions are unavoidable in order to further reduce public contacts”, according to the text agreed at the talks.

Berlin has emerged as one of the hotspots of the pandemic’s second wave, with the capital on Thursday crossing the crucial threshold of more than 50 cases per 100,000 people over the last seven days.

“These developments cause me great concern,” Berlin’s mayor, Michael Müller, said on Thursday evening. Bars, restaurants and off-licences in the capital will from Saturday be forced to close between 11pm and 6am, and rules around public and private gatherings at night time will be further tightened.

Comment: As noted, similar restrictions are being implemented all over Europe – and it’s still unclear just what they have to do with a virus.

“We cannot rule out having to agree to take further steps,” Müller said. “We want to do everything to avoid a lockdown like the one we’ve already had.”

In Italy, where the number of daily new cases leaped from 4,458 on Thursday to 5,372 on Friday, the scientist advising the health ministry on the pandemic warned that the country was at risk of reaching 16,000 new infections a day, “like France, Spain and Great Britain”.

Italy’s south was relatively unscathed by the first phase of Italy’s pandemic, but Campania is now recording the highest daily infection tally, followed by Lombardy, Veneto and Lazio.

“This insidious virus is filling hospitals again,” Walter Ricciardi told SkyTg24. “Covid hospitals in Campania and Lazio are almost full and I am very concerned, not so much about intensive care but about sub-intensive therapies because infectious patients need to be treated in a certain way and places are already reaching saturation point.”

Comment: We’re entering flu season, and, as is the case every year, and throughout Europe with it’s underfunded and inadequate healthcare systems, hospitals are seeing an influx of patients and hospitals are struggling to manage.

Latina, a province in Lazio, was placed under a 14-day ‘mini-lockdown’ on Thursday after a 155% rise in cases in recent days.

It is now obligatory in Italy to wear face masks outside, with the prime minister, Giuseppe Conte, also advising families to wear them indoors if grouped together.

Comment: Meanwhile a renegade Mayor in Italy has stated the provable fact that masks are useless and unnecessary against a harmless virus such as this.

In France, which reported more than 18,000 new cases on Thursday, almost 25% of intensive care unit beds are occupied by Covid patients – although the figure rises to 40% in the Paris region.

Comment: They were making similar, dubious claims during the first lockdown.

As Russia reported 12,126 new infections – the highest daily rise in cases since the pandemic began – authorities in Moscow were considering closing bars and nightclubs. The previous record daily rise was 11,656 cases on 11 May, when strict lockdown measures were in force across most of the vast country.

Russian authorities have recommended people stay at home this weekend, but have no lockdown in place and the Kremlin has said there are no plans to impose one for now.

The Moscow mayor’s office was looking into closing bars, nightclubs and karaoke bars, but keeping restaurants in the capital open, the RBC media outlet reported on Friday, citing a source at the mayor’s office.

“We have to at least somehow reduce the number of people in the city, otherwise we may arrive at the same strict restrictions as we had in the spring,” RBC quoted the source as saying.